Review: HAHA #3 – How A Lack Of Words Can Speak Volumes

HAHA #3, available in stores on Wednesday, March 24th, is the next intriguing installment in W. Maxwell Prince’s series on the life of clowns. While not a clown per se, this issue features a pantomime and his attempts to make a living. What’s interesting about this story is the complete lack of dialogue—a feature that perfectly illustrates the tale’s theme.

Readers meet a mime (presumed to be “Remi” from the title) in the opening panels of this story. The performer tries his hardest to put on a show for the people passing by on the boardwalk. Employing a number of techniques, Remi just can’t seem to excite his audience. So, in desperation, Remi forms finger pistols and pretend to fire them—to no avail. 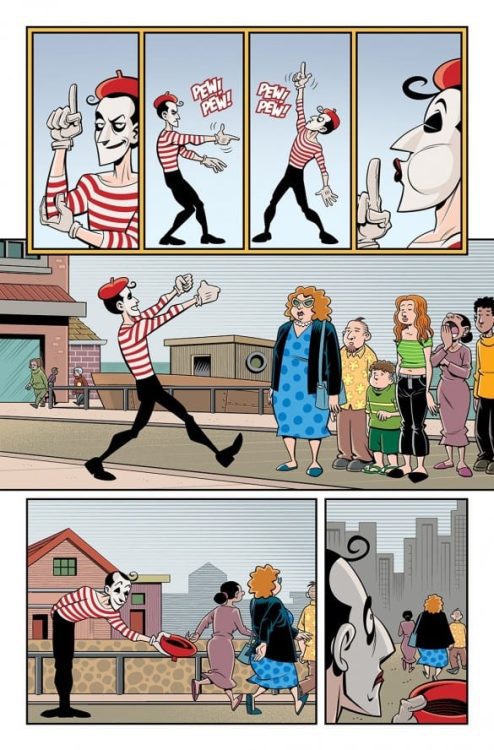 The sad realities of life quickly befall our protagonist. With no one interested in his miming, he travels home, feeling rejected by life itself. We see him turning on the news and melting into a world of sadness after work, which resembles our own lives in similar life stages. 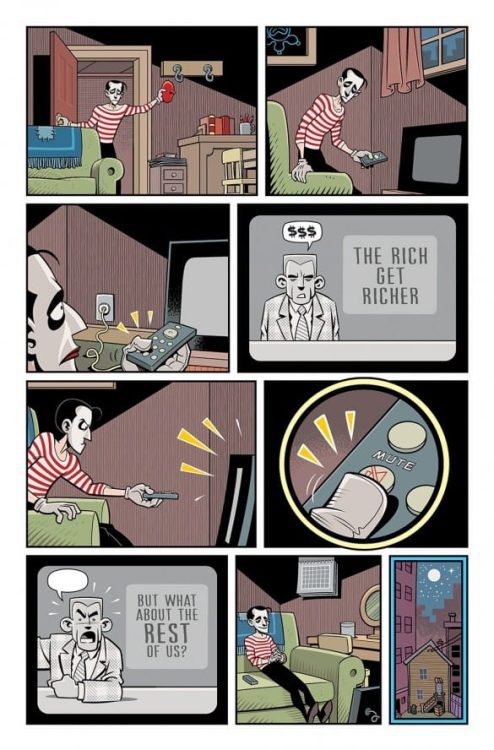 Eventually, a small glimmer of hope meets Remi in the form of a flyer. It promises to pay the person who finds “copper wire” in a dump. Jumping at the opportunity, our mime friend races to the scrap heaps. But what he finds there could change his world forever.

Prince’s plot is amazing in its clarity, especially without the use of dialogue. We feel the unbearable weight of world that won’t throw Remi a bone. What’s more, the narrative captures that experience of hope when a small opportunity promises to alter our outcomes.

Roger Langridge’s artwork pairs wonderfully with the story Prince is telling. The cartoony format gives readers the impression this story may be suitable for children before turning toward darker scenes. Seeing the protagonist sleep on a couch, struggle to pay rent, and riffle through garbage brings up realistic problems people face in our own world. We also loved how the coloring makes a clear distinction between Remi and his surroundings—the pasty white on his face and red and black outfit stood out against the more natural background colors. Additionally, despite the lack of dialogue, the lettering for the sound effects fit in well with their panels’ illustrations.

HAHA #3 offers readers an abrupt change in Prince’s storytelling formula while retaining a similar message. We hope the creative talent behind this series tries out even more unique formats.

Were you a fan of this unique storytelling format? Let us know in the comments below!

HAHA #3 offers readers an abrupt change in Prince's storytelling formula while retaining a similar message.Review: HAHA #3 - How A Lack Of Words Can Speak Volumes