GREEN LANTERN: BLACKSTARS #3, available in comic book stores on Wednesday, January 29th, concludes writer Grant Morrison’s three part miniseries, and it’s definitely one for the books. The newly created Blackstar order, made from the old universe’s Green Lanterns, is poised to assert absolute control over its beings. But Blackstar Parallax, a.k.a. Hal Jordan, dreams of a world long forgotten, one in where he’s a Green Lantern. Can he uncover the secrets of this alternate reality before free will as we know it is erased?

Jon Kent, the son of Superman, a boy with pent-up angst and disappointment in his world’s “heroes,” has officially joined the Blackstars. Hal knows this puts his teammates in the sights of Superman, but believes reaching out to the boy was the only way to show him he was understood. Unfortunately, Superman sees this as an act of aggression and levels much of the Blackstar militia. 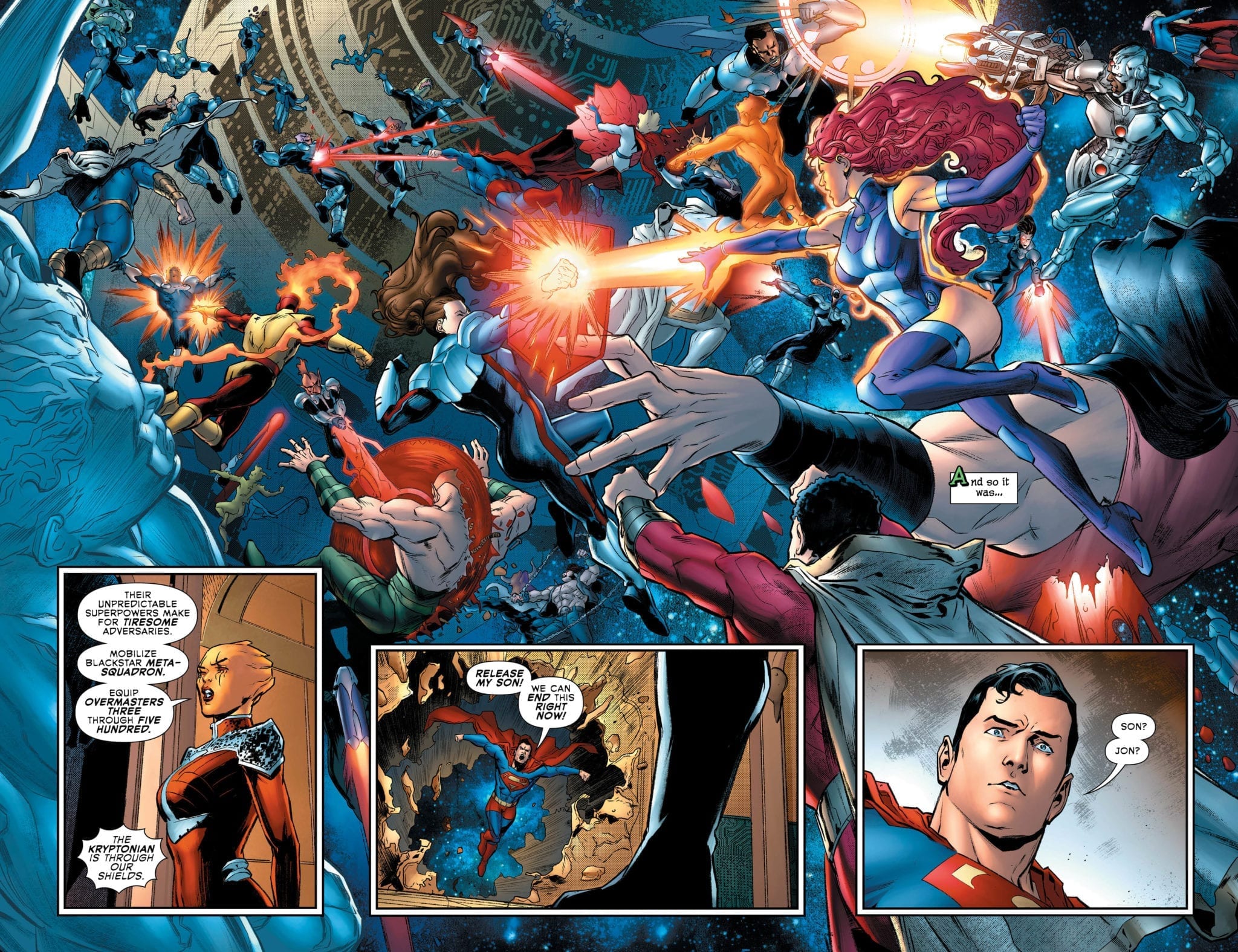 Morrison brilliantly portrays the tensions that inevitably arise between the new generation and the old guard, the restless and the unmovable. We witness Jon unleash the anger that’s been buried for a long time, while Superman attempts to reach out to him in understanding, albeit too late. Each group believes one couldn’t exist while the other was around. Unfortunately, they failed to realize that their fear of losing control over the other would ultimately lead to their destruction. 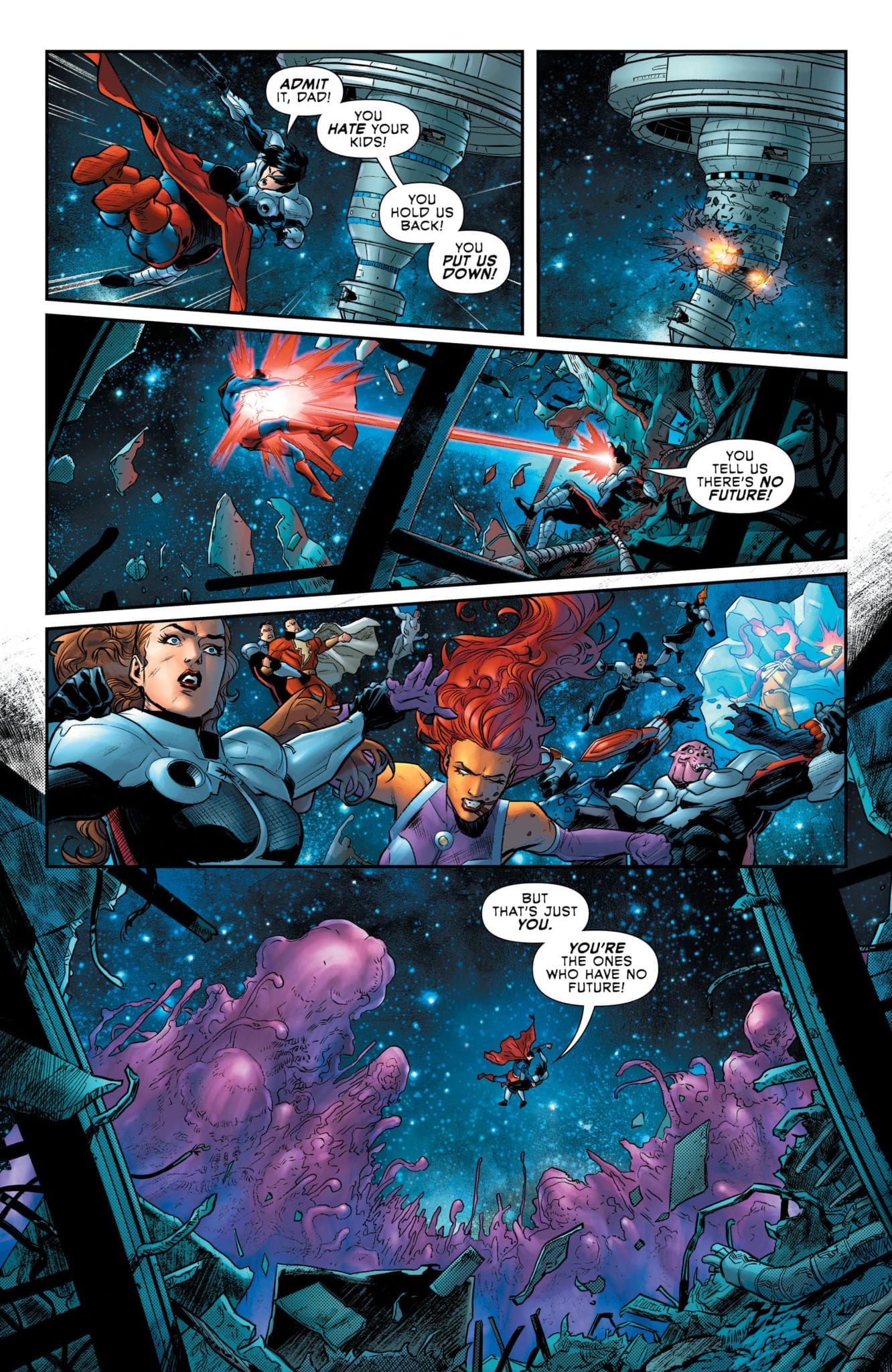 But all hope is not lost. Hal asks Belzebeth to give him more information about his dreams of another life, only to hear the faintest whisper in his ear—the voice of his old Green Lantern ring A.I. And, in a blaze of glory, the old Hal jumps into action. The former superhero ditches his Blackstar gear and encourages the Blackstars to cling to their own willpower, rejecting any Controller who would decide their destiny for them. But will rousing their forces be enough to topple Belzebeth?

The artwork within this miniseries’s final issue captures the essence of the entire run: a blending of dystopian nightmares and hopeful new beginnings. Xermanico’s penciling and ink work, combined with Steve Oliff’s coloring, give readers a fully-realized look at the chaotic world that is this version of Earth. What’s more, the details of each character are incredibly in-depth. Readers can see their heroes in all their glory, right down to the threads of Superman’s cape. Coupled with the bright red flashes of light from the Blackstars, one will feel like they’re in the middle of the action.

Steve Wands’s lettering was well-placed throughout the book as well. It followed the action to help readers pace themselves through the fast-paced scenes.

Liam Sharp’s artwork for the main cover depicts an epic clash between Hal and Belzebeth, pointing readers to the issue’s ultimate confrontation.

GREEN LANTERN: BLACKSTARS #3 is a thrilling conclusion to the Blackstar saga. We’re excited to see where Morrison and team take the mythos next!

What do you think lies ahead for the Green Lantern Corps? Let us know in the comments below!

Review: Willpower Versus Ultimate Control In GREEN LANTERN: BLACKSTARS #3Morrison brilliantly demonstrates the tensions that inevitably arise between the new generation and the old guard, the restless and the unmovable.