Continuing the trend of 80th-anniversary one-shots starring some of their iconic characters, DC Comics released its Green Lantern 80th Anniversary 100-Page Super Spectacular this week. Several popular Green Lantern writers are showcased in this issue, including Geoff Johns, Robert Venditti, and the late, great Denny O’Neil. Strangely absent is current The Green Lantern writer, Grant Morrison, but Liam Sharp does do the main cover for the book.

This issue also showcases stories drawn by a number of talented artists, including Gary Frank, Ivan Reiss, and Mike Grell. Several artists are also featured throughout the issue in various pin-ups. This accomplishes two things. It allows the issue to feature the work of other artists, such as Jamal Campbell, Joëlle Jones, and Bruce Timm, while also allowing for the appearances of various Green Lanterns who don’t have a story in this issue, such as Jo Mullein from Far Sector, Teen Lantern from Young Justice, and Tai Pham from Green Lantern: Legacy.

There are a number of stories worth commenting on in this issue, from Geoff Johns’s heartfelt tale about Hal Jordan (featuring a humorous twist ending) to Denny O’Neil’s final Green Lantern/Green Arrow tale. But I think there are two stories that deserve special attention, and they both bookend this issue. The first is James Tynion IV’s story about Alan Scott, drawn by Gary Frank. When DC Comics rebooted its universe with the New 52, the original Alan Scott disappeared and was replaced by a counterpart from Earth-2 who was gay. This was a departure from the Golden Age Green Lantern, who had two kids. This tale seems to bring the Earth-2 counterpart’s sexuality back into play for the classic Alan Scott. It will be interesting to see what this revelation will do for his character in the future and how it affects the existence of his children (Obsidian and Jade). I’m not the first to point this out, but whether DC decides to make him gay or bisexual, any stories told about him from the 1940s and 50s will certainly have a new layer of complexity, as Alan struggles to be a gay or bisexual man in an era when being so was unacceptable.

The second story is about Simon Baz, written by Sina Grace, and drawn by Ramon Villalobos. This is an important story for our times, highlighting the problems of racism, Islamophobia, and white terrorism. One problem I often find with Simon Baz stories, though, is that he can often get lost in the shuffle of Green Lanterns and hasn’t always been given a distinct voice. To some extent, that is true in this issue, too. Baz serves as a voice battling and speaking out against Islamophobia and white supremacy, but his words could just as easily have been spoken by any character. He more often than not, seems to serve as an empty signifier without a unique personality, into which people can say anti-Islamophobia things. This is certainly true in this story, and some of the dialogue screams, “Hey! I’m a Muslim. Get it?” Don’t get my wrong. I enjoyed this story, and I think Baz’s character is an important and necessary addition to DC’s roster. I, for one, appreciate the message of the story and the speech that Simon gives about his Islamic faith. I just think DC struggles to provide Baz with his own voice so that he is more than a mouthpiece for on-the-nose anti-Islamophobic dialogue and representation.

All of that said, I think both of these stories are important, and the fact that they bookend this issue is representative of the diversity of the Green Lantern franchise.

I’ve become a big Alan Scott fan over the last few years, and few things made me more excited than seeing Gary Frank draw him in Doomsday Clock #12.

Throughout Tynion’s story, Frank (with colorist Steve Oliff) draws the characters beautifully, adding his signature lining and shading to the characters’ faces. The standout moment of this first story (besides its message) is when the reader turns to the last page and sees Scott’s Green Lantern take flight. 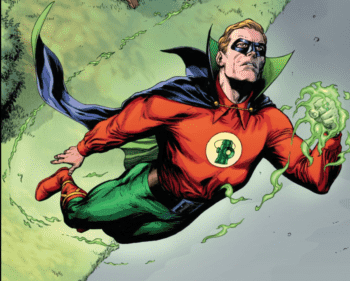 Frank was made to draw noble-looking superheroes! After so many years of waiting for the JSA to return and having Alan Scott teased in everything from Doomsday Clock to Wonder Woman’s own anniversary issue to the previews for Death Metal #2, it was great to see Alan explored in his own story. While short, I appreciated seeing all of the small character moments and conversations that made this tale work, and no one could’ve done it better than Gary Frank!

Villalobos’s art (with colorist Rico Renzi) on the Simon Baz story is reminiscent of Frank Quitely or Chris Burnham.

Villalobos’s work, like Quitely and Burnham, is an acquired taste. I, personally, have always thought that Quitely’s line work (and here, Villalobos’s), makes every character’s face, and even every surface, look like a crinkled up sponge. But it’s grown on me. The coloring and line work are solid, and Villalobos and Renzi make every character “pop” and look distinct on the page.

This issue is a beautiful love letter to 80 years of Green Lantern. I do think it’s a little unfortunate that one of the younger lanterns, like Teen Lantern, didn’t have a feature (although she does have a pin-up). Still, I understand that choices had to be made and that the focus was put on the most historically popular lanterns. Again, it was good to see Denny O’Neil take one last swing at the Green Lantern/Green Arrow team-up that helped establish him as one of the most important comic book writers in DC’s history, and it was fun to see Guy Gardner’s strategy for distracting Sinestro.

Did you read the Green Lantern anniversary one-shot? Tell us your favorite story from it in the comments below.

This issue is a love letter to 80 years of Green Lantern stories. It speaks to our times while having fun along the way.Review: GREEN LANTERN 80TH ANNIV 100 PAGE SUPER SPECT #1 - A Green Lantern for All Seasons (Almost)