Graveyard Slaughter is a new horror anthology comic book headlined by writers Cullen Bunn and Kevin Watkins, along with an impressive roster of artists. With just over three weeks left on its Kickstarter campaign, the book is described as “dedicated to rekindling the feel of the horror movies you might have picked up at your local video store.” And much like those schlock films in the back of the video store, this is an entertaining piece of vintage horror worth checking out.

Way back when, a video store was the place to check out the movies after it had left theatres. In those same stores, there were some movies deemed too shocking for the front-most shelves. In the darker, chilling corners were gonzo flicks of the 80s like Creepshow, Fright Night, or Hellraiser. Nowadays, streaming and video-on-demand are the main methods of content consumption. Still, fans of that particular era of horror films are eager for a nostalgic trip back to that video store and its more spine-tingling offerings. If this resonates with you, Graveyard Slaughter just might be the book to scratch that itch. 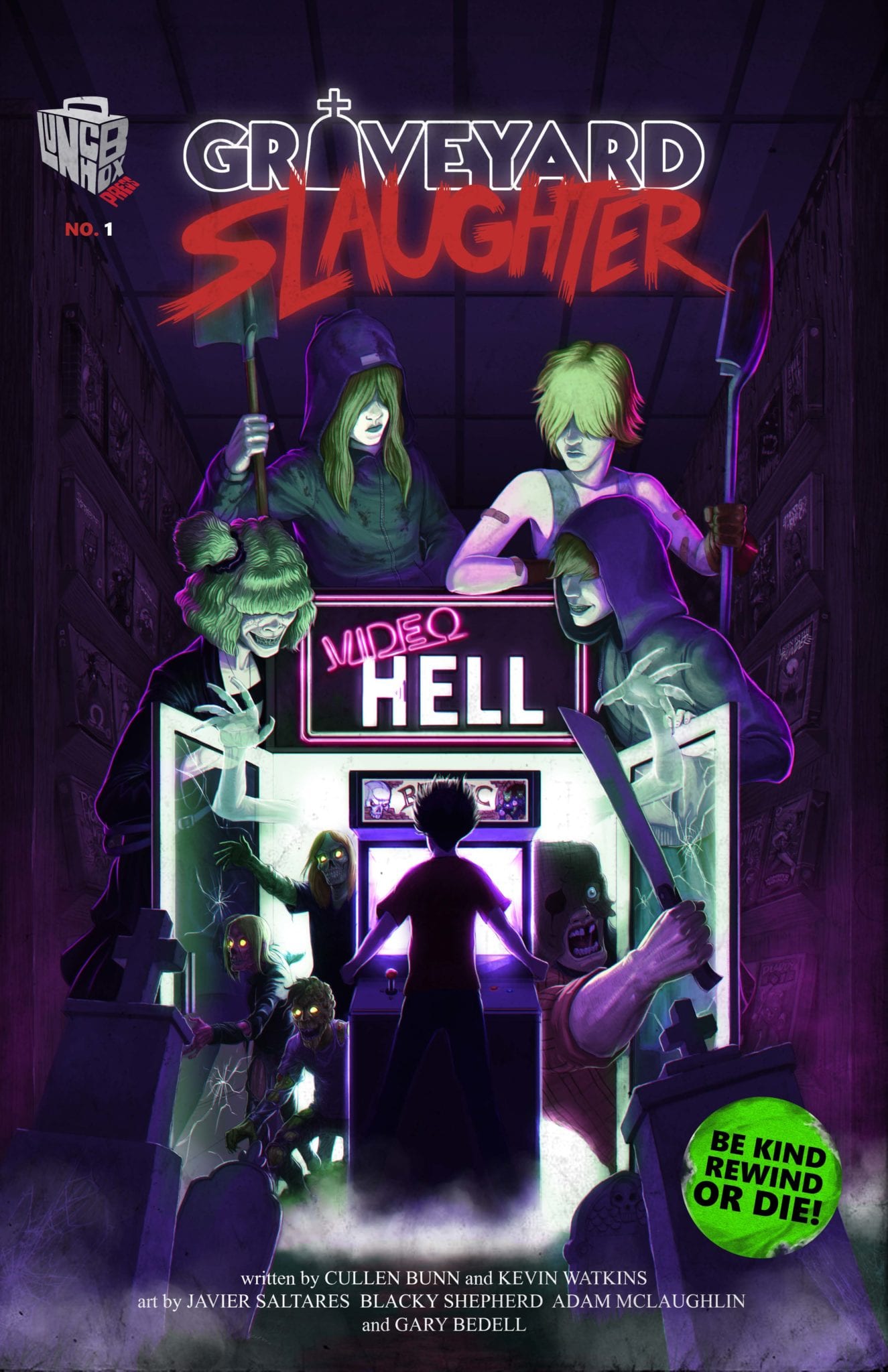 Graveyard Slaughter is comic book anthology that embraces the bloody madness and nostalgia of 80s VHS gore. Those passionately curated horror sections of the deep dive video rental stores. We invite you to get a membership at our video store…Video Hell. Graveyard Slaughter will be running on Kickstarter all through June. Once funded…we plan on delivering the book by Halloween 2019.

Graveyard Slaughter contains four short tales of terror, each involving teens or kids paying a horrendous price while playing a game. Another four vignettes weave around the short stories, each a terrifying instance in “your local Video Hell.”

Each story manages to deliver on the gruesome, campy material to varying degrees. Both Bunn and Watkins clearly love the sub-genre, and it shows in this anthology. One standout is Kill With One Eye Open, about a group of teens sitting around a campfire, listening to the tale of a maniac slasher. You can easily tell where the story is supposed to go, which it does. However, just before it ends, the story veers in a twisted and fun way that is sure to delight the reader’s inner monster.

The cover alone is a truly satisfying piece of artwork. It wholly evokes that 80s horror vibe with its neon purple highlights, collage of campy monsters, shelves of VHS tapes in the backdrop, and an arcade console at its center.

Four artists bring an array of styles to Graveyard Slaughter – Javier Saltares, Blacky Shepherd, Gary Bedell and Adam McLaughlin. Troy Peteri of A Larger World Studios provides the letters for the entire book. Each story is presented in black and white illustrations, giving the book a bleak and otherworldly air. The lack of color also gives the book a low-budget feel, much like the films it takes its inspiration from.

The artists don’t hold back when it comes to the gore and horror. The blood, monsters, and dismemberments will truly make your skin crawl. One particular image that stands out is at the end of the third Video Hell segment featuring a facelift (of sorts) reminiscent of the terrifying illustrations found in Scary Stories to Tell in the Dark.

There really isn’t too much to look for under the surface of Graveyard Slaughter, which is by no means a negative comment. Come for the monsters, the gore, and the scares, and stay for the exact same reason. It’s truly an enjoyable read for anyone that loves the camp, gore, and horror that the 1980s did so well.

Graveyard Slaughterhouse is scheduled to be released just in time for Halloween 2019. You can check out and support the Kickstarter campaign here.