GOD OF WAR: FALLEN GOD #2 hits comic book stores on Wednesday, April 7th, further detailing Kratos’s agonizing journey after battling the gods. Along the way he met an elderly man who spoke of fate and destiny, ideals the warrior is vehemently opposed to. So our protagonist continued running. But an old “friend” may throw another wrench in the mix, one that will further propel Kratos toward his destiny.

Last issue Kratos sought to escape from the Blades of Chaos bound to his hands. Yet each attempt to rid himself of them failed—even throwing them into the ocean sent them right back. His travels now lead him into an expansive desert where one can commune with the forces that be. 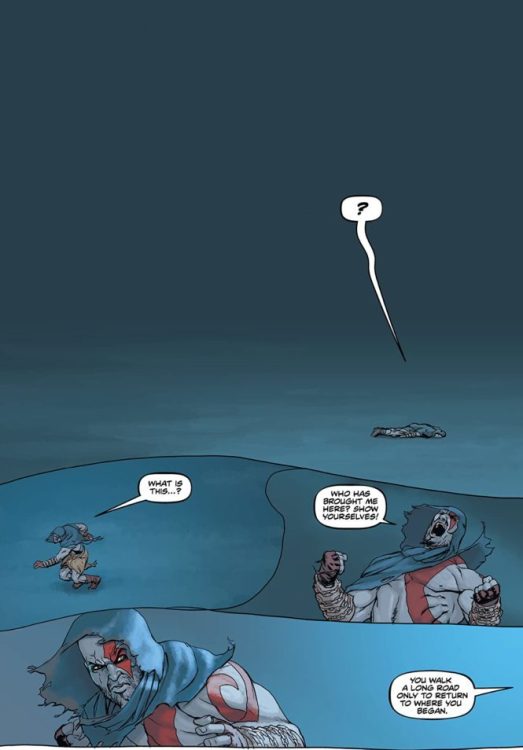 After listening to the cryptic messages from the old man for so long, Kratos is surprised to hear another voice speaking in this desert. He soon recognizes it as Athena’s, the goddess who he believes to be the cause of all his past—and present—suffering. The reader can practically feel the frustration, rage, and sorrow all in this one panel. 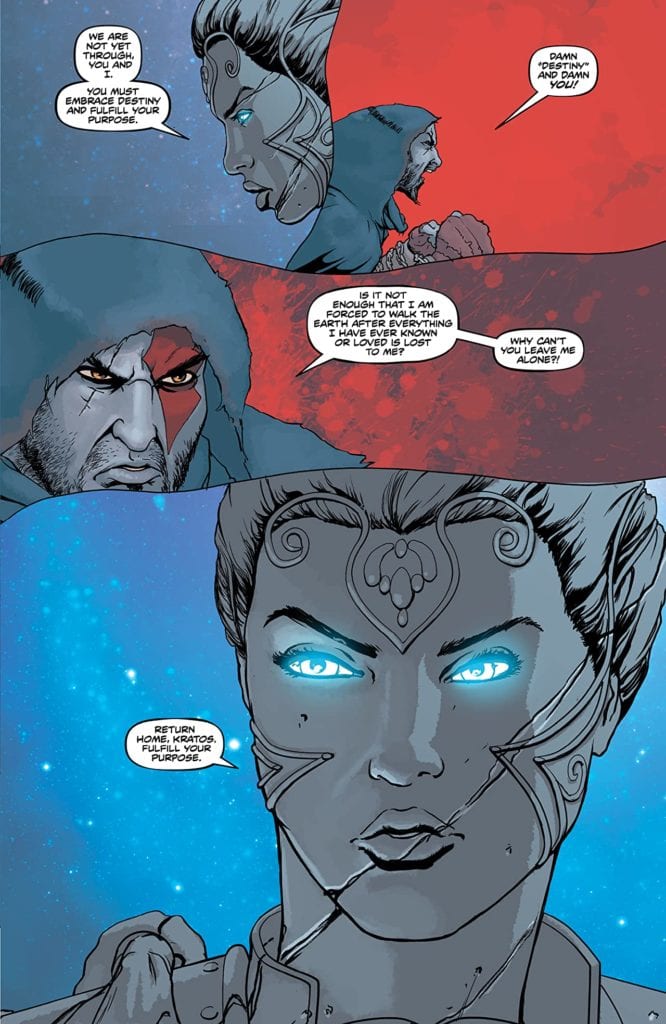 Athena and Kratos’s words ask readers an age-old philosophical question: Is our destiny determined, or do our choices shape it? And as if to purposely add further confusion to this query, the story throws a “chaos beast” (which is aptly named) at our hero to test his resolve.

Chris Roberson’s narrative does a brilliant job of casting Kratos as a reluctant savior figure. Choosing to believe the people see him as the true monster, the protagonist hopes to dispense with any notion of duty. It’s clear the might of Kratos’s will and the force of the gods’ determinism are engaged in a battle with no end in sight.

Tony Parker’s penciling and ink work, Dan Jackson’s coloring, and Jimmy Betancourt of Comicraft’s lettering fit extremely well with Robertson’s written story. The detailed figures of Kratos heaves his muscled body across expansive desert and brush to emphasize how difficult his self-imposed quest is. Readers will notice how his pale gray skin stands out against even the most colorless backgrounds, reminding us of the past burdens he carries. What’s more, the blend of wordless exclamations in the dialogue speaks volumes, showing how few words effectively placed work extremely well with a character like Kratos.

GOD OF WAR: FALLEN GOD #2’s reluctant hero makes this story just as engaging as the games that brought him to life. We can’t wait to see where his destiny lies.

Do you think Kratos actually controls his own destiny? Let us know in the comments below!