REVIEW: GIDEON FALLS #26 Sets Its Characters on a Collision Course

Image Comics’ Gideon Falls is a far-reaching, era-spanning, multiverse-hopping story with a huge cast of characters. In the space of 25 issues, writer Jeff Lemire, artist Andrea Sorrentino, colorist Dave Stewart, and letterer Steve Wands have created a universe that’s sprawling and enormous. To take all of these interlocking characters and plotlines, which feel like they couldn’t be further apart, and bring this story to a conclusion in two issues seems impossible. Image Comics’ Gideon Falls #26 shows that impossible is just what this creative team does.

Lemire highlights the enormity of this story. We check back in with each major character and see where they are in the multiverse. It seems crazy that all of them could reunite. They’re literally worlds apart. But Lemire focuses each character in on finding a way out of the crumbling multiverse. And as the multiverse falls apart, Lemire begins to suggest that the lines between each version of Gideon Falls might be more blurry than we thought. It should feel rushed, but Lemire finds a natural way to begin his concluding act. Lemire leans on Sorrentino to help bridge the gap between each multiverse and does volumes worth of storytelling in the span of two pages. With Norton Sinclair closing in at every turn, Lemire raises the stakes and gets our hearts racing for the final issue. 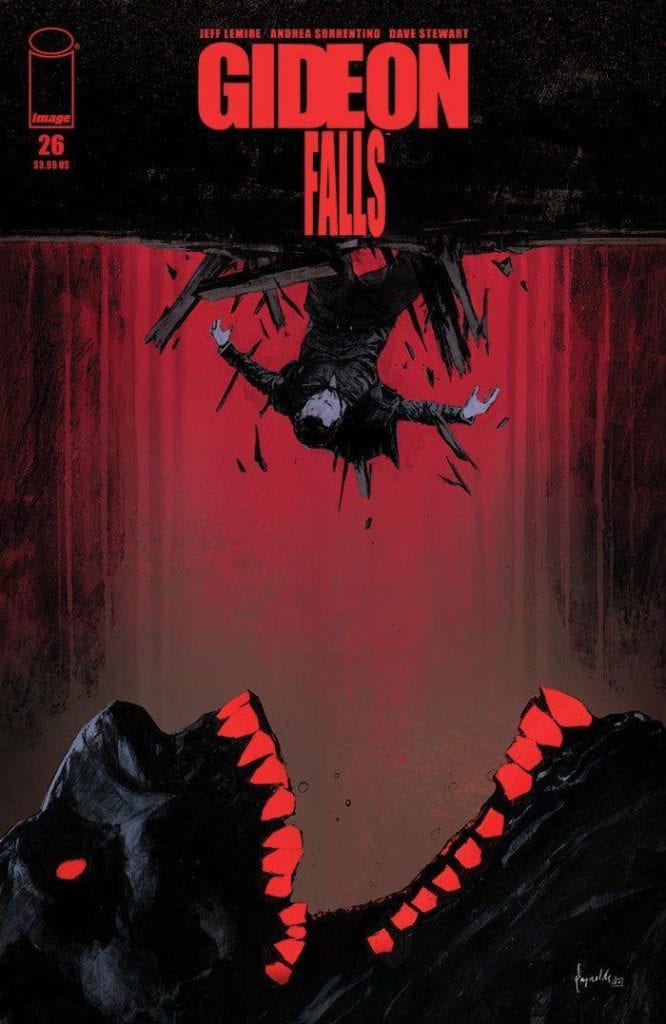 Much of the blurriness of Gideon Falls #26 is due to Sorrentino’s art. Sorrentino doesn’t use traditional panels on this issue when he can help it. Panels are in the shape of cogs or look like they’ve splattered onto the page. With characters portrayed on different sides of a cube, we begin to question what the characters are experiencing and seeing. Sorrentino makes us feel almost as though they can see out, off the page. And as one character is separated from the rest, we see them fall into an area of the page that looks ripped away. Sorrentino makes the multiverse walls come tumbling down by breaking through the walls between the reader and the material. It feels as though the characters are coming off the page. Sorrentino shows their world is crumbling by having it crumble into ours.

Stewart gives us a visceral sense of how close each character is to danger. As Fred wanders through steampunk worlds, with his new friend along for the ride, the pages look nearly colorless. But as Clara and her dad ride across horizons in a Western version of Gideon Falls, everything feels bright and warm. Sinclair’s influence drains the life out of the page, and Clara and her dad seem far from his reach. As the day wears on, Stewart turns the western sky from a yellow to dark orange. The page both warns of coming danger, with the red tone seeping in, and acts as a last splash of color before Sinclair closes in. In the closing pages, Stewart strips each panel of almost all colors except for the red color of blood.

Wands’ lettering shows the disintegration of the multiverse. In Gideon Falls #26‘s final moments, as characters talk from panels placed on each side of a cube, Wands keeps their word balloons inside each of the cube’s faces at first. But as the page continues and lines blur, their dialogue begins to jump outside each panel. This shows us the move from the characters being separate to being able to communicate. At first, they aren’t speaking on the same plane of existence. Their speech is only heard by those at their level; it’s restricted by their panel. But as their dialogue jumps out, the rest of the page is used as a shared space, a giant panel shared by all of them. They’re speaking to one another now. And as they notice that someone is missing, and that character’s cube goes tumbling off into the abyss, Wands’ places their lettering on the page with no tails. Their words become as alone and orphaned as this separated character. 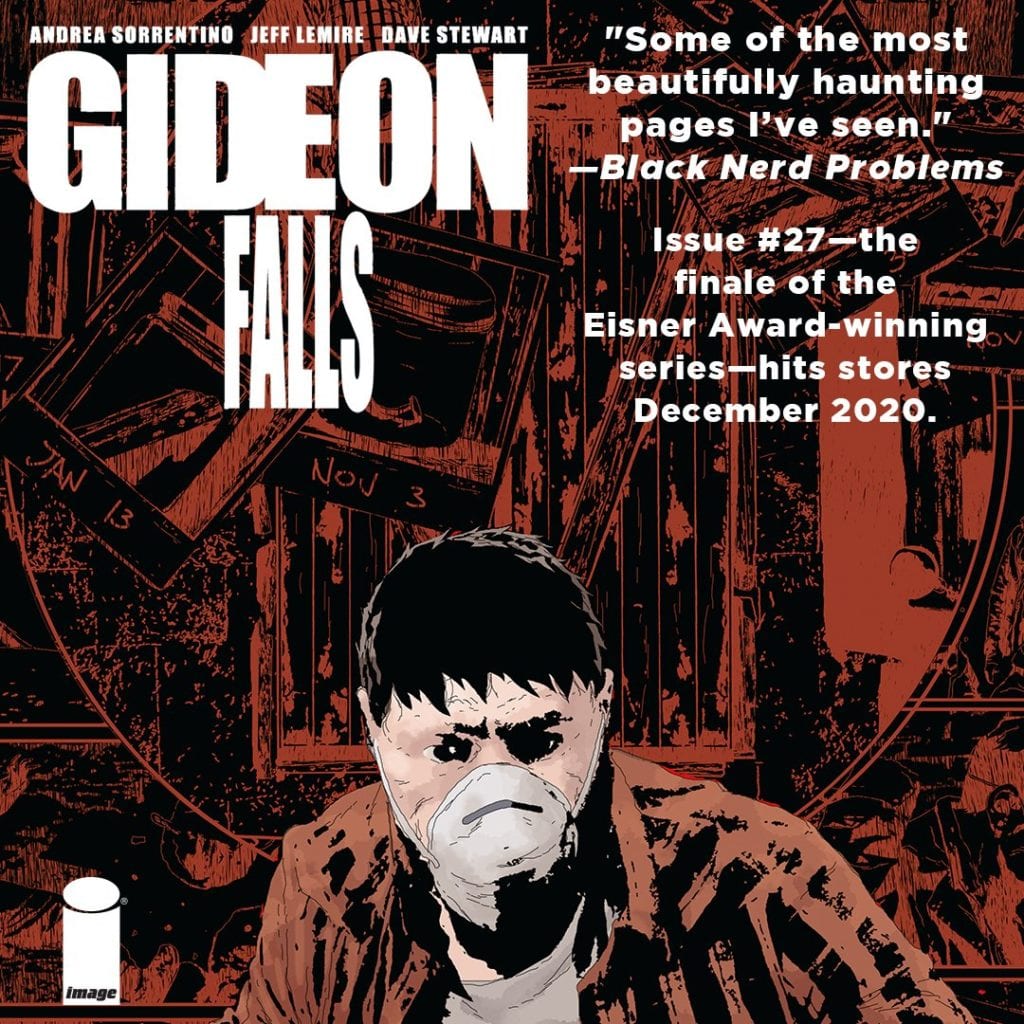 Gideon Falls #26 gears up for a big finale. Even with a giant-sized final issue, tying together a sprawling narrative like this seems impossible. But this creative team, with Gideon Falls #26, looks to be on track. They begin to bring all of the threads together so that everyone is accounted for in their final issue. Well, almost everyone. Pick up Gideon Falls #26, out from Image Comics October 21st, at a comic shop near you!