On September 30, Marvel Comics releases Giant-Size X-Men – Tribute to Wein & Cockrum #1. This issue retells the original tale from Len Wein and Dave Cockrum 1975’s Giant-Size X-Men #1, with some minor updates in outdated language and over thirty-six artists paying tribute to the story, with each artist doing a different page. VC’s Clayton Cowles letters this new edition.

In the age of Jonathan Hickman’s Dawn of X, with its emphasis on Krakoa, it only makes sense to re-release the first issue that introduced the living island. This issue is a fine tribute to Wein and Cockrum’s classic story, with unique material in the back, including interviews by Jess Harrold from the wives of Wein and Cockrum, Christine Valada, and Paty Cockrum, as well as a few words by Chris Claremont.

Two notable pages stick out, in part because the original images are included in Claremont’s tribute. The first is by Carmen Carnero and David Curiel, featuring an image of Storm taking flight in Africa to answer the prayers of her people. The second is Mark Brooks’ image of the assembled New X-Men in the Westchester mansion. Carnero and Curiel’s take on Storm de-sexualizes her a bit, gives her a more stiff character design, and more of a scowl compared to the original image. Brooks’ image is a beautiful homage to the original assembly of X-Men, with updated character designs, gorgeous colors, and a metaled-up Colossus.

Cowles does an excellent job in this issue of updating the original lettering in this new edition, making the letters a little bit more substantial and legible without changing the look of it too much from the original.

Fans of the X-Men should love this issue. It’s a gorgeous tribute to the comic that changed X-Men forever! Hardcore fans will love revisiting the story and will love the bonus material. This is also a great tribute to release at this time when X-Men stories are focused on Krakoa. Revisit the tale that started it all! Or at least, got it started again!

What did you think of Giant-Size X-Men – Tribute to Wein & Cockrum #1? Tell us in the comments below! 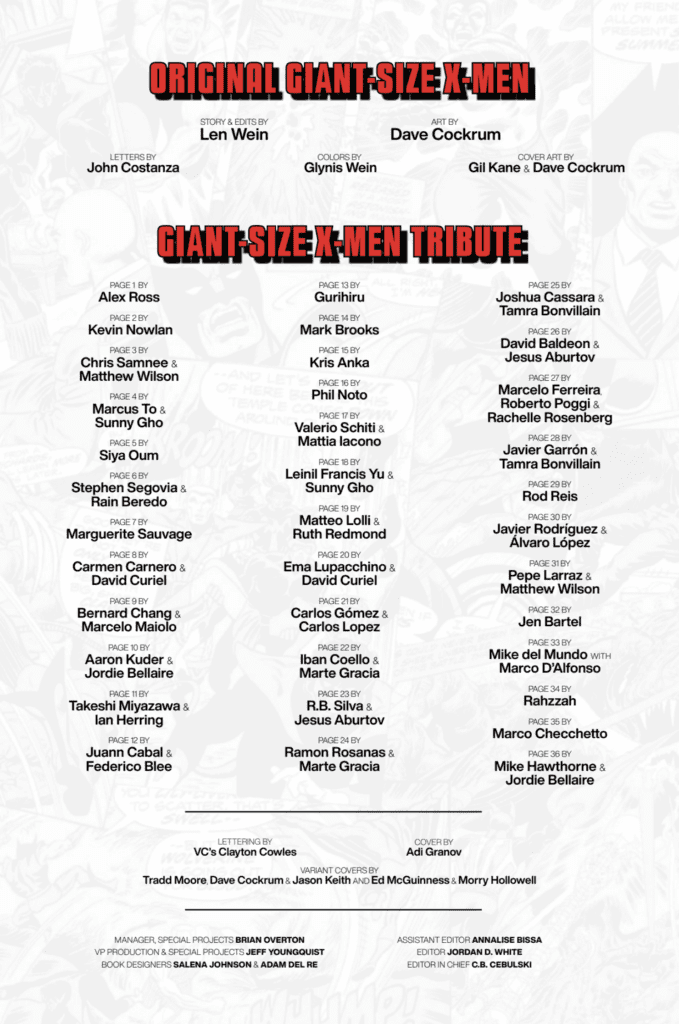 Revisit the first appearance of Krakoa in this stunning tribute to Len Wein and Dave Cockrum and the story that changed the X-Men forever!Review: GIANT-SIZE X-MEN - TRIBUTE TO WEIN & COCKRUM #1 - A Gorgeous Homage