GI JOE, A REAL AMERICAN HERO #274, available from IDW Publishing on September 2nd, kicks off the final confrontation between the Joes and Cobra in the underground tunnels of Springfield. Larry Hama’s second to last issue in the Snake Hunt arc is filled with firefights and explosions to rival the best action movie you can imagine.

Robert Atkins’ cover leaps out you like the best Hasbro action figure packaging when the GI Joe toys were re-introduced with the cartoon in the 1980s. The colors are bold and bright. The characters are practically pulsing with adrenaline. It’s pure fan service to make a cover look this good, and it brings up all the best memories of playing with those action figures as a kid.

Hama’s story is as straight as it gets. The Joe’s have infiltrated the underground Cobra lair to rescue Snake Eyes. Outmanned and outgunned, the Joes have to fight their way out below while their support teams defend against overwhelming odds on the streets above.

GI JOE, A REAL AMERICAN HERO #274, is a “pure good guys versus bad guys” action comic that’s sole purpose is to keep you entertained. You can turn your mind off and soak it in, and I sincerely wish more comics would take the same approach of entertainment as the top priority.

Let’s be honest. Some of the costumes from the original designs are ridiculous, but honestly, I didn’t care. That’s because Netho Diaz pulls it off in two ways.

First, every panel is focused on the action. A firefight is in progress, or tanks are battling it out, or explosions are collapsing secret tunnels, or super slick ninja fights are playing out. There’s something cool to catch your eye in every panel.

Second, although the costumes can be somewhat ridiculous, Diaz plays it straight by avoiding having the characters do too much hero posing and by slimming the bulkier costume bits to look more ceremonial than cheesy.

Diaz brings all the nostalgia to life and big credit to Thiago Gomes and Maria Keane for the excellent inking work. A lot of the scenes take place in shady tunnels, and the hatching work here is excellent. It’s clean, sharp, and balanced between bold and subtle in all the right spots.

As much as I credit Diaz for the art, part of that credit also belongs to J. Brown’s colorwork. Both the Joes and Cobra have costumes that reflect nearly every color of the rainbow, depending on which squad is central to any given panel. The costumes reflect who they are and their team, so it’s essential that soldiers within a group look similar, but the group should be distinctive enough from other groups to stand apart. Brown’s colorwork is bold and eye-catching, yet not so bold as to be obnoxiously garish. The colors are pure eye candy to an already exciting issue. 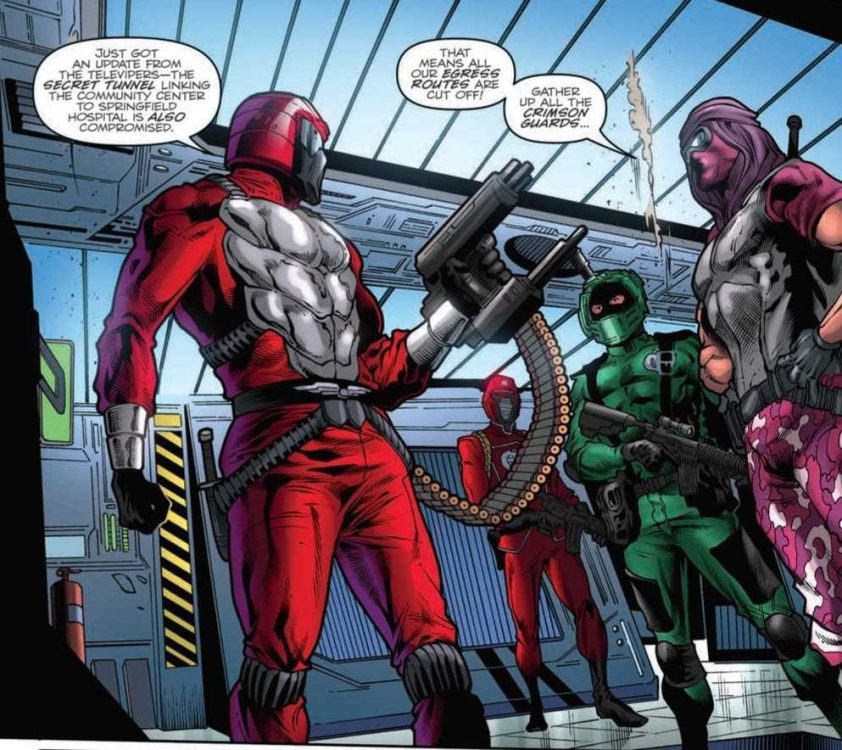 Neil Uyetake’s lettering amps up the intensity with big, loud sound effects on every page. Explosions swell with a gigantic WHOMP. Uzi’s spit bullets rapid-fire with streams of BRRAAPP’s. What makes the lettering so great is how the shape and direction of the placement for each sound effect become part of the visual by directing your eye towards the direction of the energy—great work here by Uyetake.

GI JOE, A REAL AMERICAN HERO #274, available from IDW Publishing on September 2nd, is everything you love about afternoon action cartoons brought to life in a comic. The writing is heart-pumping, and the art is eye candy overload. I can’t wait for the final issue of this arc.