Review: GENERATIONS SHATTERED #1 is a Joyful Rerun of DC Classics

There’s not much that’s new about DC Comics’ Generations Shattered #1. It feels more like a retelling of DC history than its own original story. But somehow, writers Dan Jurgens, Andy Schmidt, and Robert Venditti, along with a huge cast of artists, colorist Hi-Fi and letterer Tom Napolitano, make this patchwork of DC favorites feel fun and fresh. It’s the dose of 80’s/90’s joy and weirdness comics sorely need right now.

Jurgens, Schmidt, and Venditti borrow from a lot of major DC works. In fact, most of Generations Shattered #1 feels nearly identical to Crisis on Infinite Earths. A major villain is destroying the DC Universe, and a cast of heroes is brought together by someone who’s watching from out of time (dare I say, a monitor?) to put a stop to this big baddie. So why does Generations Shattered feel like it works? For one thing, it seems deeply aware of its own “plagiarism.” It rehashes Crisis to comb through it for opportunities missed. And the moments that Generations Shattered does its own thing are pitch-perfect. Old man Booster, Kamandi meeting Changeling, the general flubbing of Skeets’ entire plan. It feels so true to ’80s and ’90s comics, forever humbly nodding to its influences. It’s a creative team that’s throwing out the rule book for the sake of fun. They’re telling us a story we’ve seen before because they’ve decided it’s about time we got a rerun. 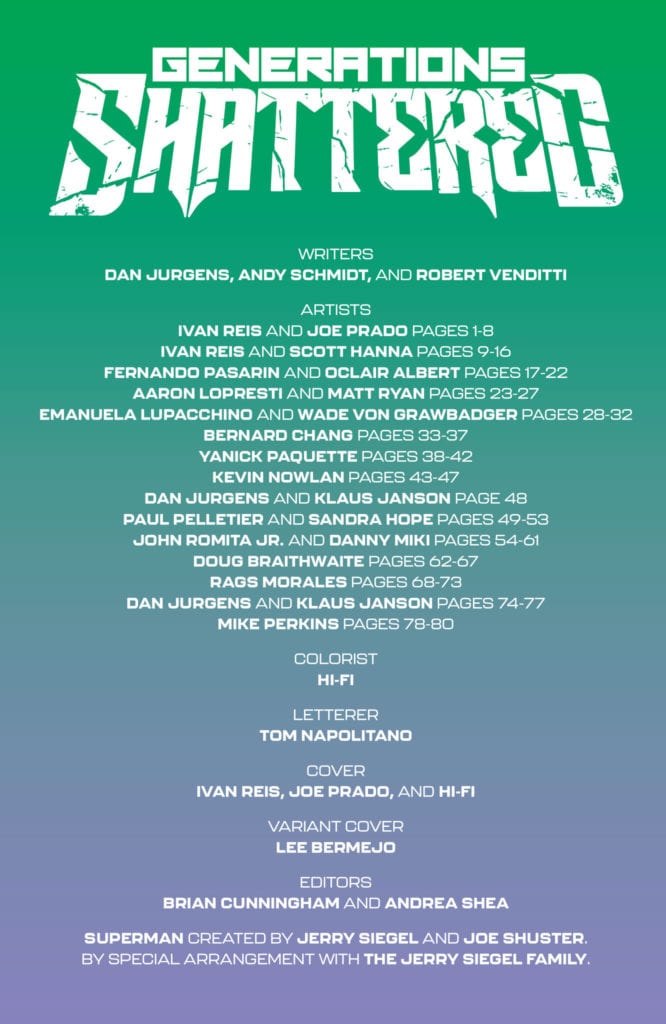 There are a good 22 separate artists working on Generations Shattered #1. A little overkill? Well, actually no. Because Generations Shattered is a treasure hunt through DC’s multiverse and history. So when Dan Jurgens and Klaus Janson are drawing pages, following the Golden Age Batman, they’re deliberately imitating the style of 1940’s comics. But when we meet our very ’90s-esque supervillain, it’s John Romita Jr. and Danny Miki who take the helm, using the edgy stylistic linework we know from that era. When Generations Shattered #1 mimics works like Animal Man, with characters falling outside of panels, Rags Morales takes over. Morales’ style is remarkably similar at times to that of Chas Truog, Animal Man regular. And finally, we land in a world drawn by Mike Perkins. It’s a peek behind the curtain, a humanity behind the theatrics. Generations Shattered #1 is a spectrum of themes, eras, and styles. A team of artists brings their wildly different approaches to the table, with intense diversity to the spectrum.

Hi-Fi is constantly adapting to each new scene in Generations Shattered #1. To match Kevin Nowlan’s style in the 1960’s scene of space battles, Hi-Fi makes the scene bright and vibrant. Much of the comic is incredibly colorful, in fact. It’s reminiscent of the Bronze and Silver Ages. Occasionally, like when Dr. Light fights Hector Hammond, we’re reminded that we’re reading a modern comic. And when we see our heroes falling through time, the scenes behind them are slightly faded. It’s like we’re watching these scenes through shards of glass as time is literally shattering. Finally, as the issue closes, Hi-Fi drains the page of all color. It’s an interesting turn. It reminds us both that we’re reading a modern comic, it feels quite new and experimental to change the color scheme so late into the issue suddenly, but it also reminds us this issue is dealing with the world of old comics. Like a 1920’s comic strip, we’re left in a strange, old world. 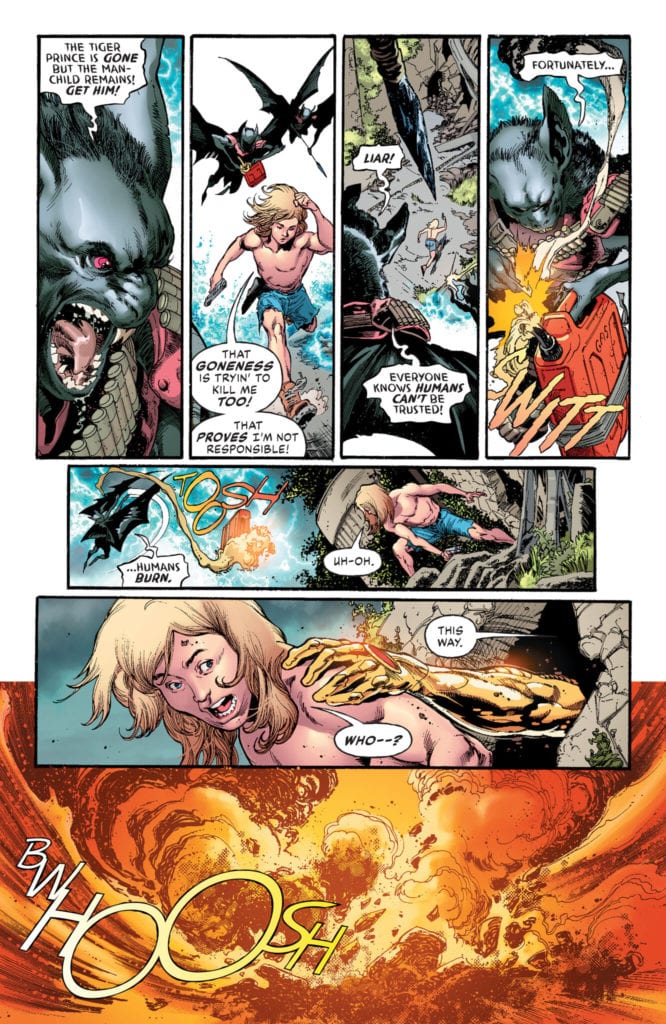 So much of what makes this issue feel like a fun romp through time is Napolitano’s lettering. Napolitano’s lettering is constantly changing, especially noticeable in his sound effects. The thin lettering of an ’80s style “BWHOOSH,” marking an explosion, looks so different from the “KRAK” of 1940’s Batman breaking open a door. When we finally meet our big bad villain, Napolitano brilliantly shows us his state of mind. First, as he sees the heroes undoing his hard work, his lettering is all over the place, from small whispers of disappointment to screaming in anger. And as he makes his move, the change is chilling. We see the next few lines as cold, emotionless captions. It feels like a flex. This villain is so powerful that he doesn’t have to follow up with screaming and wailing when he makes his move. Instead, his actions speak for themselves.

DC Comics’ Generations Shattered #1 is a love letter to the DC Universe. It takes classic earth-shattering events like Crisis and Zero Hour and brings them together in one fun romp through time. It’s nothing new, but it makes for an awesome rerun. Pick up Generations Shattered #1, out from DC Comics on January 5th, at a comic shop near you!