Review: FRANK AT HOME ON THE FARM #1 — Scared and Confused

FRANK AT HOME ON THE FARM #1, out today from Scout Comics, is the first issue of a 4-issue psychological horror miniseries. If you’re looking for a few good scares, and a mysterious, well-crafted plot, this is the perfect book for you.

Frank returns from the trenches of World War I expecting to be greeted by his loving family on their farm. What he finds instead is a dark mystery, his family missing, and only the animals there waiting for him. 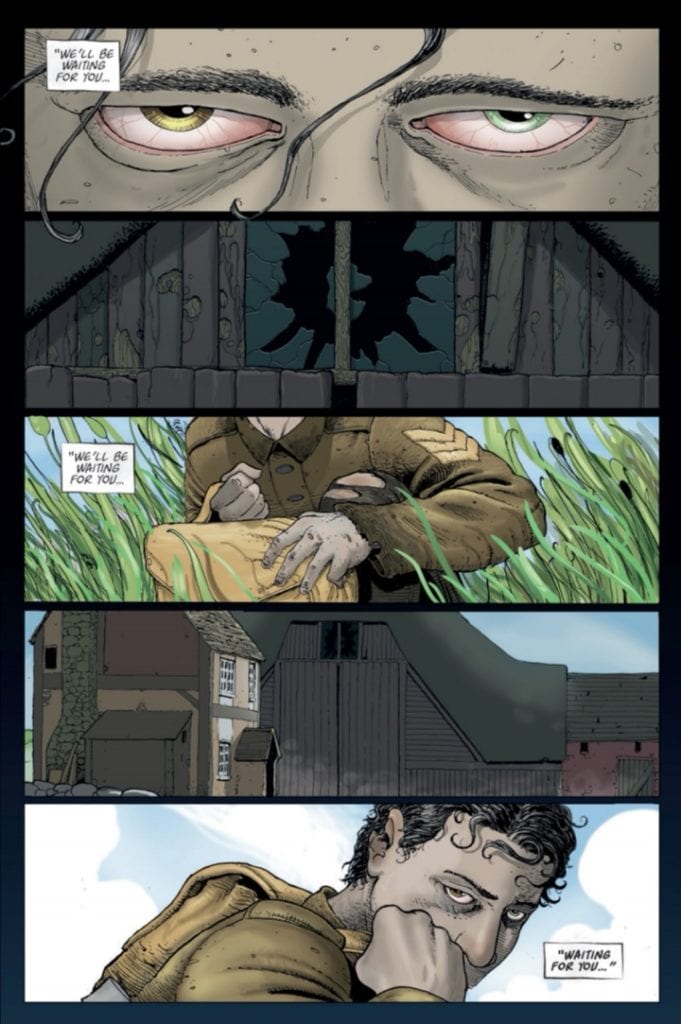 As a psychological horror writer, there’s a thin line you walk between confusing and intriguing your reader. Fortunately enough, writer Jordan Thomas only manages to do the latter. Throughout the entire issue, there is so much mystery — so many unanswered questions, like “Where is Frank’s family?” or “What’s up with the weird animals in this town?” The reader can’t even get themselves to start questioning what the heck is going on. In this comic, all they can do is sit back and let the puzzling story creep up on them with the promise that it’ll eventually sweep them off their feet and answer every question they have.

One of the big answers in this series brilliantly arrives only at the issue’s last few pages. But when it arrives, the reader’s left so astonished and curious, their thirst to know more grows with each time they contemplate what they had just read. I’m personally really looking forward to learning more about this story’s weird world and characters. Exquisite work here from Thomas.

Bint’s artwork pairs perfectly with Thomas’ creepy tale. His layouts tell a clear story, manipulating the reader’s feelings as Bint sees fit. The terrifying panels look well-detailed and convey real horror. The characters’ facial expressions look incredibly distressing and ugly to great effect. The grim, cold color palettes elevate the story’s uncomfortable vibes, and his use of natural light to add to the mystery and intensity works beautifully. But Bint’s most important feat comes with the paranoia he manages to convey in the pages’ panel gutters.

More specifically, there’s a scene where Frank, the main character, enters an old lady’s store and inquires about his family’s whereabouts. Upon realizing he’s just walked into a taxidermy store, Frank freaks out. The reader keeps getting the paralyzing notion that Frank’s being watched. If the reader doesn’t look close enough, they might miss it. But on a second look, the reader discovers that between the panels, the cold, prying eyes of all the dead animals at the taxidermy store were staring at them this entire time. These simple but clever choices Bint makes along the way never ceases to amaze the reader. After reading this issue, anyone will leave it wanting to see what Bint has in store for them next. 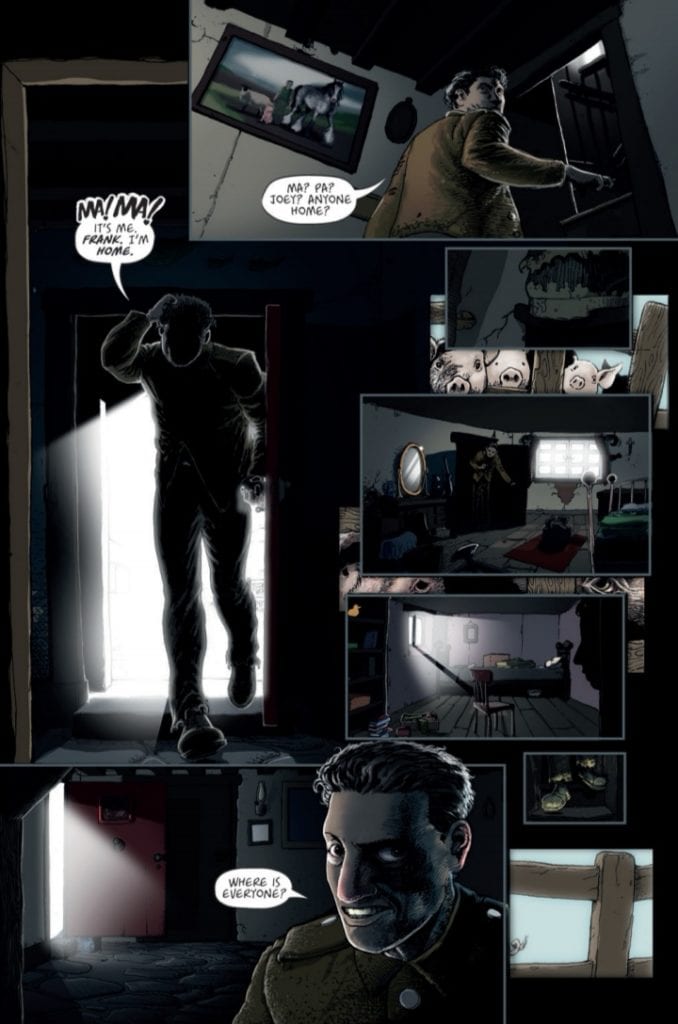 There’s simply not a single flaw in LetterSquids’ wonderful, stylish lettering. The bolded words pop out, making the reader think they can almost hear the characters talking. The choice to not use any sound effects brings a new layer of gravitas. When the characters scream, LetterSquids masterfully makes it look realistic and dramatic. Each choice LetterSquids makes elevates the art to a whole new level of creepiness and suspense. It’ll be interesting to see how LetterSquids is going to handle the lettering once the story inevitably reaches its darker moments.

Frank at Home on the Farm #1 gives the readers everything they could’ve hope for, and then some. The story is a psychologically terrifying tale with many unanswered questions, and the art’s unique style further engages the reader in the story’s world and grabs them by the throat, refusing to let go. Strongly recommended for fans of The Shining and Animal Farm.

The story is a psychologically terrifying tale with many unanswered questions, and the art's unique style further engages the reader in the story's world and grabs them by the throat, refusing to let go.Review: FRANK AT HOME ON THE FARM #1 — Scared and Confused