Review: Flashback To The Future In STEALTH #5

STEALTH #5, available from Image Comics on September 9th, reveals Dead Hand’s origin as Tony makes a desperate move to uncover the truth. Written by Mike Costa, this issue answers questions about the Stealth’s link to Dead Hand’s power and moves all the players in place for an epic finale next issue.

Jason Howard’s cover, like the several before it, evokes a strong Batman/Joker dynamic between the main hero and villain. Drawn in a near-josei style, Dead Hand’s dominant position on the “high ground” echoes how he always seems to have the upper hand in their conflict. It’s a powerful image that practically drips with dramatic tension.

Costa’s penultimate issue in this run makes a considerable amount of forward progress in the story to set up the finale. The issue was wholly satisfying for telling the full story of Dead Hand’s origin in an efficient way (it only took two pages) and revealing just enough about the safehouse connections to feel like you’re moving forward while still leaving something for the finale.

The story is super lean, action-packed, and fast-paced. You get equal parts “big reveal” and “shoot ’em up” action in a way that didn’t feel muddled or crowded. I enjoyed the quick-hit storytelling from Costa.

Nate Bellegarde’s art packs tons of kinetic energy into every action panel. There’s plenty of gunfights and explosions in this issue, and Bellegarde adds to the impact of each moment by showing characters taking damage and flying from the force waves. 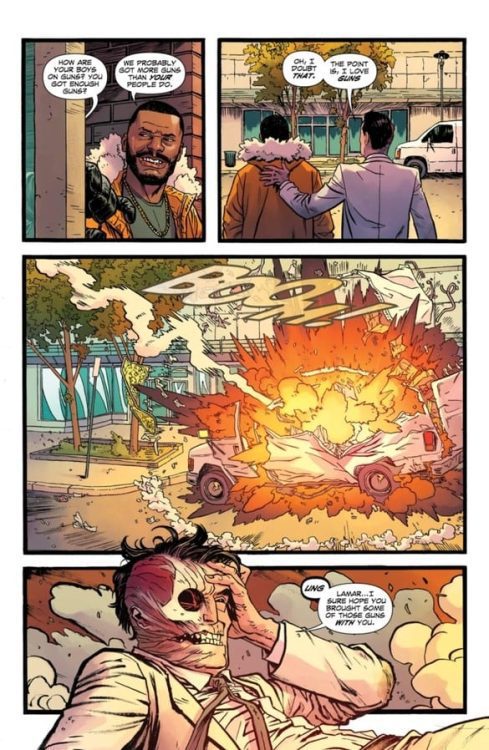 It’s a high-octane demolition derby between a superhero and a super-villain in the crossfire between rival gangs. Just like Costa’s writing, Bellegard’s produced rapid-fire art that keeps hitting you over and over. There are so many action lines in this issue; it becomes a literal blur, making it a real page-turner.

Tamra Bonvillain’s color work shines for the sheer volume of flames and explosions that light up each panel. Bonvillain knocked out of the park for how well the color shading reinforced the light sources to make the explosions blinding and full of energy. Kudos also for the colorwork on the Stealth costumes where the leaking radiation created glowing drips and streaks. The colorwork was so good; you’d almost suspect the comic was lit up with batteries.

Sal Cipriano’s lettering is remarkable for keeping the pace up when so much information is being revealed. Instead of turning out a wall of text that would have stopped the issue in its tracks, Cipriano broke up the dialog to move with the flow of action. Great work by Cipriano.

STEALTH #5, available from Image Comics on September 9th, is a lean, mean comics machine. The flashbacks and reveals come just as fast as the bullets, and the art packs a punch. I’m excited to see how it all ends.

STEALTH #5 is a lean mean comics machine. The flashbacks and reveals come just as fast as the bullets, and the art packs a punch. Really excited to see how it all ends.Review: Flashback To The Future In STEALTH #5