When the main Hellboy story ended back in 2019, that was supposed to be the last glimpse of the universe. Sure, prequels have been told, different corners of the world’s past has been expanded, but nothing was meant to take place after the final images of a new, post-human world. Plans change. Especially since a small group of humans managed to survive underground, Frankenstein among them after his many adventures far beneath the earth’s surface. In Frankenstein New World #1 from writers Mike Mignola, Thomas Sniegoski, and Christopher Golden, artist Peter Bergting, colorist Michelle Madsen, and letterer Clem Robins, the creature becomes our guide back to the world above. Fair warning: it’s changed quite a bit in humanity’s long absence. And most of the changes are very, very dangerous.

What remains of humanity has fled the surface to live in the subterranean caverns of the hollow earth, watched over by one of the last refuges of the old world: Frankenstein. The creature has become an oracle for the new civilization, a sleeping, motionless figure who monks pray to for inspiration. But young Lilja has dreams of the surface and a mysterious woman calling out to her. When she sneaks into the city’s temple to confess her dreams to the silent oracle, he finally awakes and grabs her hand. There is trouble in the world above. And the two are going to have to navigate the surface’s untamed, alien wilderness in order to stop it.

Frankenstein New World #1 shows the adaptability of the Mignolaverse by telling a tale that takes place after almost all the familiar trappings of Hellboy’s world have faded away. In Mignola, Sniegoski, and Golden’s new story, Hellboy is gone, as is Hell itself. Human folklore, too, has been lost to time, only Frankenstein remaining from stories of old. The last time Frankenstein appeared in a Mignolaverse story, he was embittered and lonely from his mistreatment by man, questioning his very humanity. Now, when trying to keep Lilja from following him to the surface, he simply states “Only a monster would drag you into the unknown… and I am no monster.”

But Frankenstein can’t keep the young girl’s curious spirit at bay for long. Because now that the creature has found a well-earned inner peace, it’s up to Lilja to step into the starring role. Her childlike enthusiasm provides a great contrast to Frankenstein’s calm wisdom. It’s a familiar dynamic, but one that helps keep the story grounded despite its alien, unfamiliar setting. 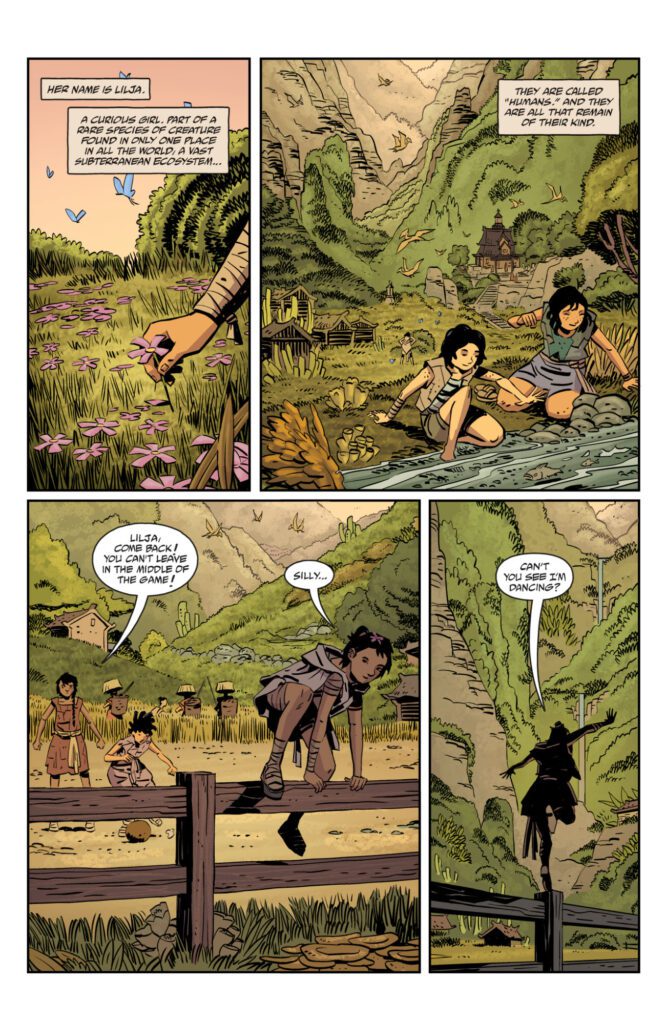 Speaking of alien settings, Bergting’s art does a great job of selling the “New Eden” the characters find themselves in. His art especially shines in a quiet nature scene where strange fruits peel themselves and bury long, tentacle-like roots into the ground below, while winged simian-fish hybrids swoop above. His rendering of the main characters also does a lot to keep them expressive and fun to follow. Frankenstein walks with a reserved, steady gait, while Lilja darts about him, pointing out the many bizarre plants and animals. The storytelling has a deliberate, steady pace, eschewing dynamism for panels laid out in grids and easy-to-read panel compositions. It fits the calm, leisurely tone of the story, and again, helps keep the stranger aspects grounded. 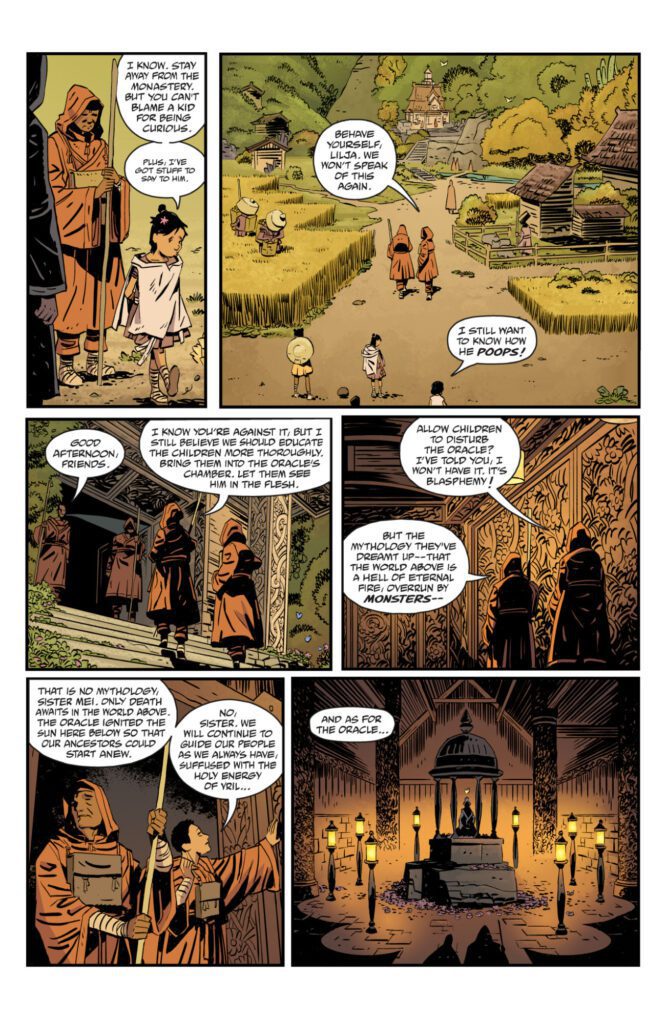 Madsen’s colors start relatively reserved, relying mainly on naturalistic greens, browns, and yellows. But as soon as the characters enter the new world, those same colors take on a brighter, neon shades. Instead of the light golden of wheat, frog creatures appear with an unearthly bight yellow. Flying fish-simians are colored in a gradient from bright green to blue. Throw in bright oranges and pinks, and you have a landscape that resembles the familiar, but twisted into something alien.

As for Robins’ lettering, it keeps the clean, rounded letters used by all the Mignolaverse books, with fun uses of sound-effects. Said effects take center stage during nature scenes where the dialogue drops away. “BOOOOMF’s” and SSSKRRIITCHH” are drawn in bubble letters that overlap one another, given bright purples and yellows to blend in with the surreal landscapes.

Frankenstein: New World #1 may technically take place after an apocalypse, but it’s not a book that feels post-apocalyptic. Instead of wandering the ruins of former civilization, it’s a book about exploring a new world that has sprung up in its absence. Life finds a way. And despite the lack of familiar people and places, there’s still something comforting in that. The book is out now from Dark Horse, and is worth a look, even if you’re not all too familiar with the Hellboy universe. It’s a new world that doesn’t demand much familiarity with the old.

Frankenstein guides a young girl through a world of strange creatures and delicious-looking fruit. Let's hope they're not poisonous.Review: Exploring a Post-Human Landscape in FRANKENSTEIN NEW WORLD #1