On August 12, Marvel Comics released Empyre: X-Men #3. With rotating writing and artist on each issue (I’m guessing to accommodate the weekly releases), writers Vita Ayala, Zeb Wells, and Ed Brisson are joined by artist Andrea Broccardo continue this tie-in tale to Marvel’s larger Empyre event. They are joined by mainstays of the series Nolan Woodard on colors and VC’s Clayton Cowles doing letters.

Empyre: X-Men #3 is a messy issue. A fun and action-packed issue, but a messy issue. At times, it’s a bit difficult to keep track of all of its moving parts. The issue moves back and forth between the action on Genosha and characters on Krakoa, with a few characters, like Hordeculture’s Opal, being teleported to Krakoa, and somehow returning to Genosha off-panel.

Highlights include Magik’s discovery of the staff Scarlet Witch used when she attempted to resurrect the dead Genoshans, although still no sign of the witch herself. Upon grabbing the staff, however, Magik is overwhelmed by its power, becoming “the Zombie Queen of New Genosha,” whatever that may mean. We’ll see what this development means in the final issue.

Meanwhile, the Cotati threat escalates even further, with the seedpod giving birth to a monstrous creature, which one of the dismembered Cotati indicates will lead to the deaths of everyone on Genosha.

This series keeps exponentially growing (albeit messily) in scale, and the final writing team will have its hands full tying up all the loose ends while hopefully giving readers insight into the Scarlet Witch’s whereabouts.

It’s worth noting here that Eduard Petrovich’s cover doesn’t quite reveal the actual contents of the issue. While I appreciate the partitioning of the cover between the Cotati, the X-Men, and the Genoshan zombies, Cyclops, Polaris, Magneto, and Colossus don’t appear anywhere in this issue.

Inside the issue, Broccardo is able to jump right into this event, with the change in artist barely being registered (this is a credit to the artists across the three issues). One of the standout panels from Broccardo includes her full page of Nightcrawler jumping into action. 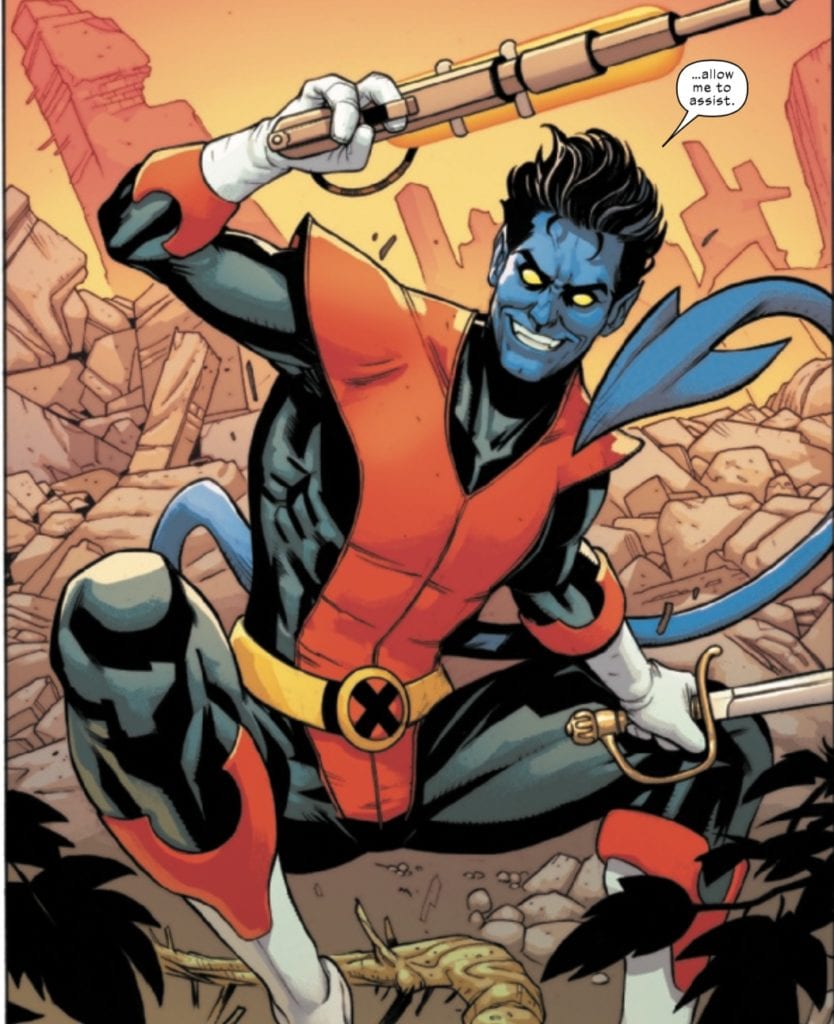 It’s always nice seeing the elf charge into battle with a smile on his face and a sword in his hand! We don’t get quite enough of fun Kurt jumping around in the X-titles.

Another great panel includes one of the Cuckoos (it doesn’t specify exactly which one), who gets cut off from her sisters and is about to be killed by the zombies. Resurrection may be a reality on Krakoa, but the writers and artists do a decent job in this panel, reminding the readers that one ought not to think that resurrection is without its cost. 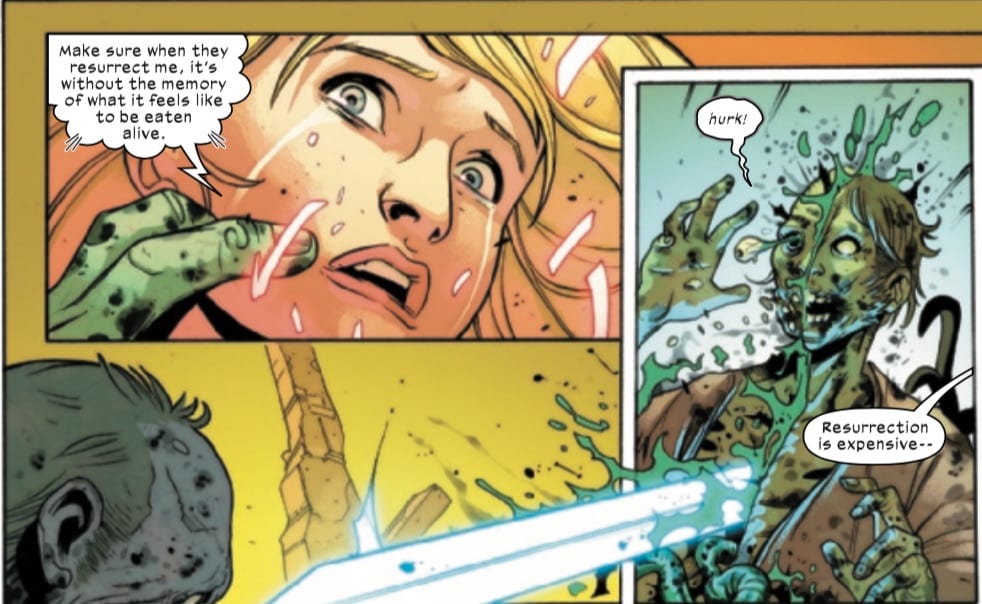 Although Magik saves her, the tears on her face and her request to be brought back without the memory of being eaten reminds us that there can still be traumatic consequences to the characters even with resurrection.

Of course, Woodard’s colors have been constant throughout this series, helping in part to keep the look consistent even with rotating artists. Woodard’s shifting yellow-green, and brown-orange-red hues have been consistent throughout, accentuating the plant-based Cotati and the plant-based Krakoan weapons while also providing a nice contrast to the viscera and rot of the zombies.

Cowles’s lettering remains steady in this issue, and he’s certainly given plenty to do. THIS panel alone gives him a fair share of dialogue and sound effects to put in. 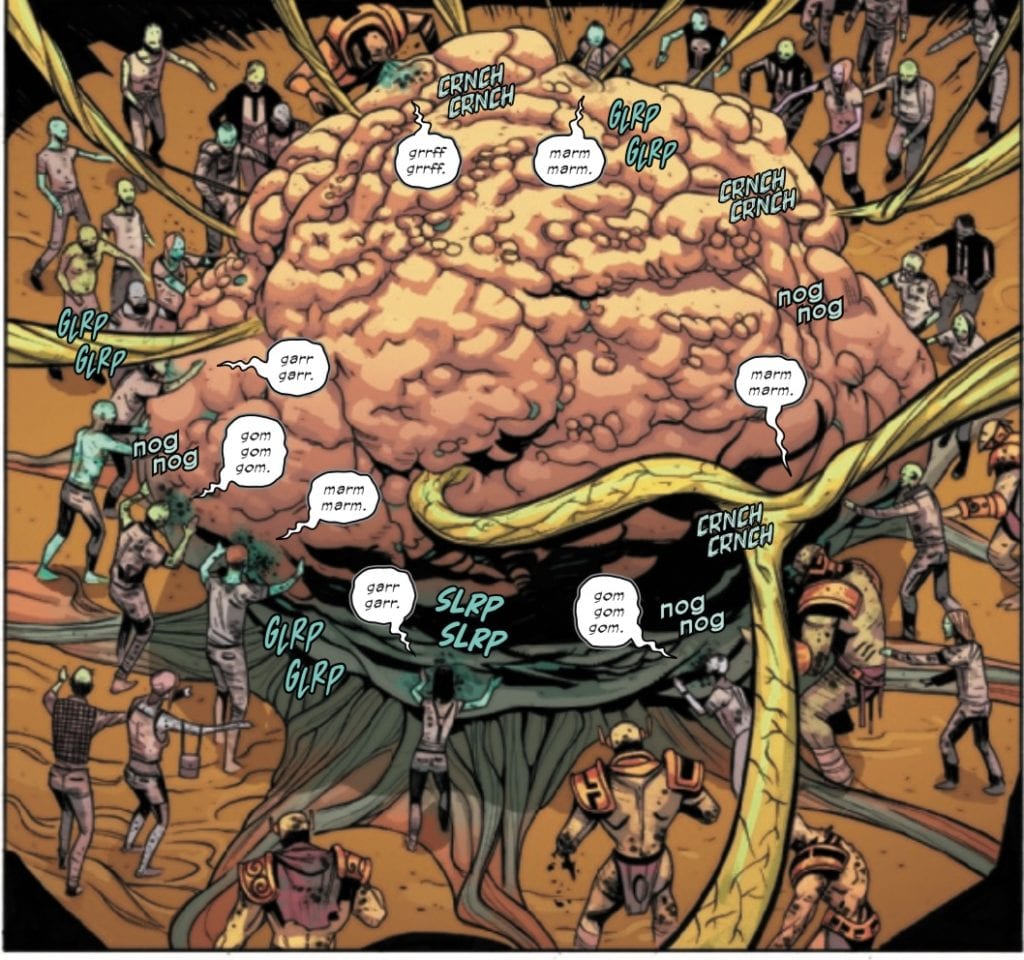 There was one place in the lettering (and in the art) that may bring some confusion. In a transition from a panel featuring Angel to one featuring Multiple Man, you’d be forgiven for thinking that the letterer, the artist, or both mixed up characters’ locations and dialogue.

You’d be forgiven for thinking that the dialogue between Jamie and Warren got mixed up here since Hordeculture chastises Jamie for calling them old, but the last person to call them old was Warren. Also, the panel before Jamie throwing up is of Warren throwing up. Initially, I thought a mistake had been made in terms of the art or the lettering, but the effect is probably meant to mirror the similar effects of getting over Hordeculture’s pheromones (nausea, calling them old, etc.). And yes, Jamie had been dosed in issue #2, so it makes sense that he’d be having the same symptoms as Warren, even though the previous issue highlighted Warren’s susceptibility to the pheromones.

Overall, this was a fine third issue, filled with action that at times can be a bit confusing to follow. We will see this week if issue #4’s writing team resolve the escalating conflict with the Cotati, the zombies, and the fate of the Scarlet Witch.

What did you think of Empyre: X-Men #3? Tell us in the comments below!

The conflict on Genosha continues to escalate when Magik finds the source of the Genoshan zombies and the Cotati seedpod hatches!Review: EMPYRE: X-MEN #3 - Things Keep Escalating...