Fans of the Forgotten Realms comic book adaptation will once again join their favorite lively party of adventurers as they explore the region’s secrets. But spirits aren’t as high as usual; the mad dragon Hoondarrh has laid waste to countless armies, and Helene, the group’s de facto leader, is severely wounded. Can Solivigant, Rayonde, and the rest of the team save her? Will Hoondarrh continue on his path of destruction? Find out when DUNGEONS & Dragons: A DARKENED WISH #3 hits stores Wednesday, October 2nd.

The story begins with Solivigant narrowly escaping the recent battle against Hoondarrh in Mintarn of the Moonshae Isles, with an unconscious Helene in tow. The situation looks bleak, but the Kenku won’t give up on his friend that easily. He performs a magical elvish ritual to bring her back from the brink of death, leaving the young wizard with one thing on her mind: revenge. 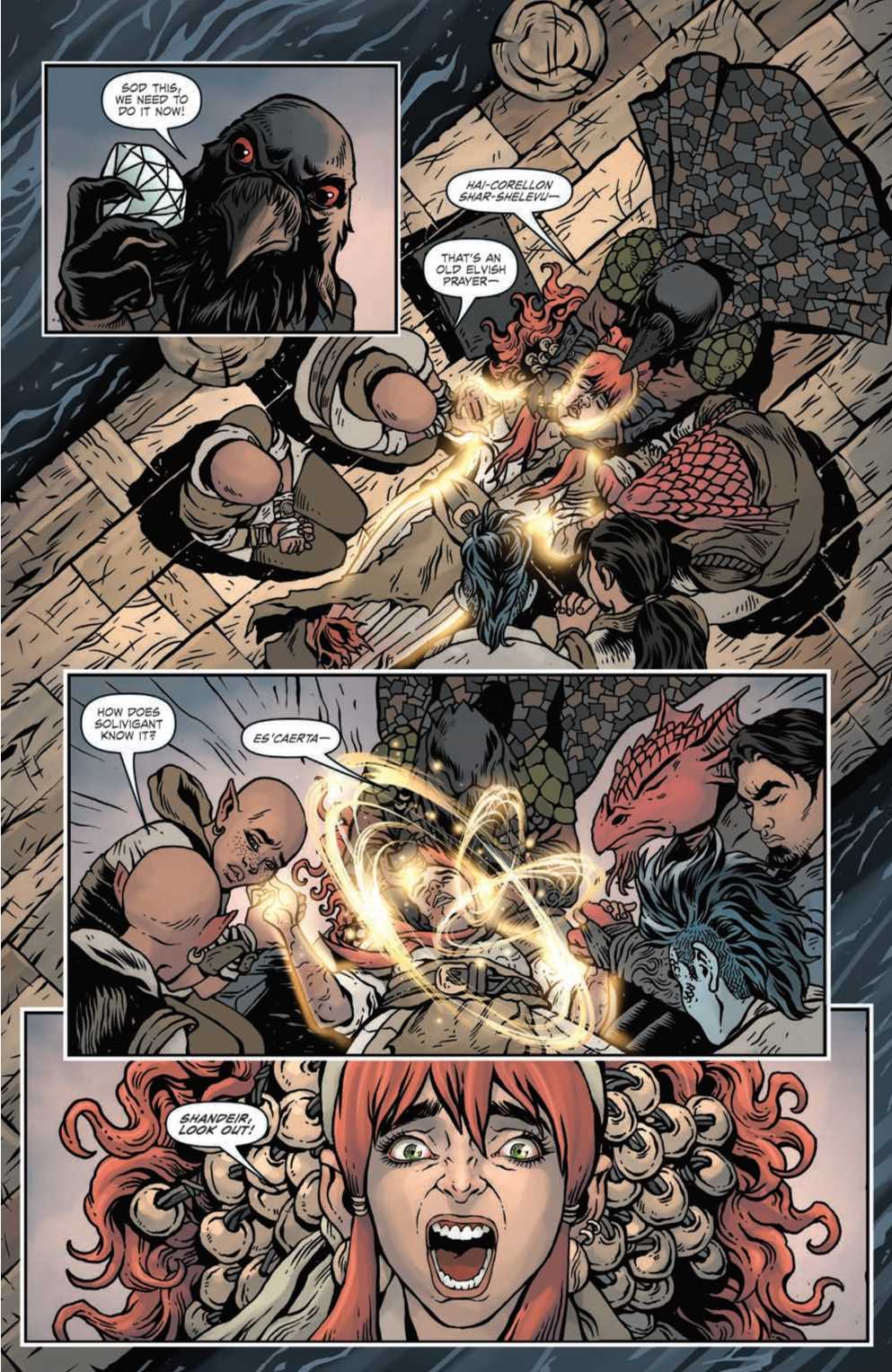 Writer B. Dave Walters gives readers an authentic look at relationship between revenge and regret in Helene’s actions throughout the story. We feel her rage at Hoondarrh for destroying her family, joining in her desire to make the dragon suffer as she did. But we also follow down the almost inevitable trail of regret she experiences as her retribution ends up hurting one of her closest allies.

Tess Fowler’s penciling, Jay Fotos’ coloring work in harmony to offer readers stunning visuals. We’re treated to a mix of fantastical elements mixed with the horrific realities of war, most clearly depicted by Helene’s awesome magical abilities in the midst of a land laid waste by fire. The colors range from dull browns and varying shades of black, reflecting the charred remains, to brighter hues infused in the magical spells.

These scenes transition quickly, so the importance of lettering cannot be understated—Neil Uyetake places the letter boxes in each panels’ most open spaces to provide room for explanatory dialogue without taking the reader’s gaze away from the stunning illustrations.

Fowler and Tamra Bonvillain’s main cover artwork shows a mirrored image contrasting Hoondarrh with Rayonde, showing how two similar looking entities can be polar opposites on the inside.

Fowler’s additional cover is once again a character sheet, as in the previous two issues. This issue focuses on Rayonde, as he is one of Helene’s closest allies.

Ibrahem Swaid’s takes a different approach than Fowler’s covers by focusing on the dynamic duo that is Karrin and Kerrin. It’s a nice change, reminding readers of the other influential member of Helene’s party.

The third variant cover features a black and white version of Fowler’s Cover A, offering up an alternate view of her astounding artwork.

DUNGEONS & DRAGONS: A DARKENED WISH #3 might be fast-paced, but it works itself out by moving the story forward. We’re anxious to see how Helene deals with the consequences of her vengeful actions.

What did you think of the startling turn of events in this issue? Let us know in the comments below!

Writer B. Dave Walters gives readers an authentic look at relationship between revenge and regret in Helene's actions throughout the story.Review: Helene Fuels Her Revenge In DUNGEONS & DRAGONS: A DARKENED WISH #3