DIE #6 from Image Comics hits your local comic book store on August 7, and the issue is another visually stunning and mind-bending chapter from Kieron Gillen and Stephanie Hans. 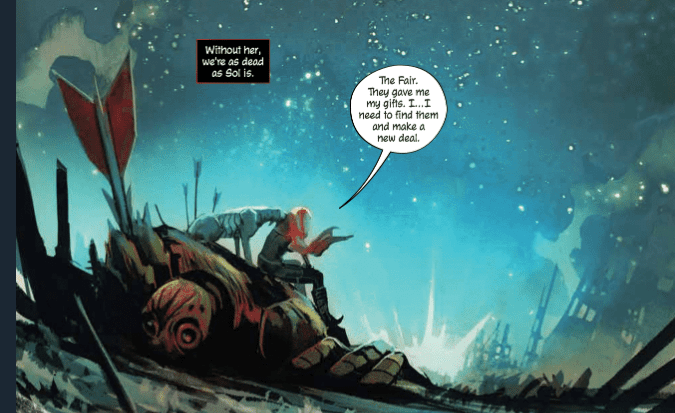 First of all, this book’s interior pages are among the best in current comics and maybe even all time. Stephanie Hans is killing it every issue. She’s helped visualize a fantasy world so beautiful that even the death and destruction is gorgeous.

Clayton Cowles is a go-to letterer in every sense. Every comic reader recognizes the name even if they don’t show the man the respect he deserves. Unfortunately, if you’re an amazing letterer, your work blends in so well it’s almost unnoticeable. That is exactly what you get here. His style works so well with the art that it seems part of it, not an addition to it. Everything is easily readable, even while using some color combinations most people would never consider. 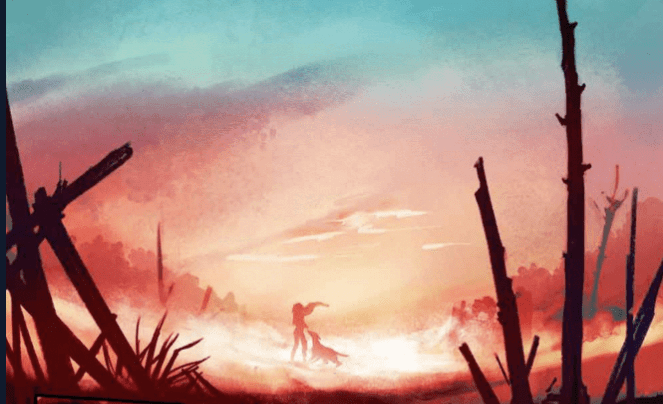 Gillen has changed the game of fantasy world-building. A couple of months ago I started a D&D campaign with some friends from work. It has definitely given me more appreciation for this story, but upon learning that Gillen had created actual rules and character sheets for this story, I was blown away. I already thought many of these character ideas were amazingly horrific and cruel.

The treasured two that I wanted to homebrew for our campaign were the Grief/Joy knights and the Fallen. After a few minutes searching online I had the handout file open on my computer, only to later discover the link is just at the end of #6 in the second essay. Of course, I go right to the knight, and to my absolute delight, the knight character is far more diverse than I ever thought. There are many more emotions than just grief and joy that your character could draw power from.

This is the new Game of Thrones so, for the love of God, please don’t let this end as badly as GoT did. There has always been mystery shrouding the world of DIE and issue #6 sheds some light. Many ingredients of this book I utterly love, but my favorite is the reality of it. This is still a story about a group of people playing a game that sucked them into this world, spat out, and then sucked back in years later. Gillen gives us so much to think about with this issue.

The Grandmaster and creator of DIE has been murdered and is now being kept with them as one of the Fallen. He opens himself up for one single question and without hesitation, Ash asks “You made Die. How?” and brings up a question I hadn’t considered at this point. How did a six-teen year old learn what was necessary to create this world? Of course, Sol doesn’t answer, but I love that this issue pulls real life and reality back into this story.

I thought this would just be a story of them escaping the world again while using flashbacks to explain what happened the first time. I couldn’t have been more wrong. Not only should we get that story, but this keeps the conflict going and interesting even after they eventually break free from DIE. Sol is the Grandmaster and the creator, but who pulls his strings? Who gave him this ability or showed him how to accomplish this? If he did all of this himself… how?

Another particular detail I find fascinating, and I often find myself forgetful, is that Ash is a male in reality, so with the reveal on the last page. I am so very intrigued how that was handled emotionally for the character. So much of this issue leaves me wanting more and more from this universe.

DIE #6 solidified my interest in this series, now that Gillen has me worrying about the person pulling the strings, whoever gave Sol this power, the ultimate threat. At this point, Sol still seems like a kid that just wants to play a game with his friends, but as Gillen has proven time and time again, we will be guessing up until the last few panels of this story. This issue has locked me in for the long haul.

Who’s starting the petition for a Gillen/Hickman collaboration? Where do I sign?

What did you think of the issue? Have you tried to play the RPG? Let us know in the comments.

Die #6 brings up more of the past our adventurers have endured, everywhere they go in this world, their past haunts them. This issue gives any RPG players a sense of dread that if they were sucked into their fantasy world, they might regret their choices.Review: DIE #6 - A Blast From the Past