NIGHTWING #74, available in stores on Tuesday, September 8th, upends readers’ expectations just as its predecessors did in this arc. The Joker has seized complete mental control over our hero—dubbing him “Dickyboy”—and has sent him to terrorize the Bat-Family. Fortunately, it’s this very family that holds the key to Dick Grayson’s freedom. Readers will enjoy a thrilling clash between the two sides as the battle for the heart of Nightwing concludes.

The scene is set; Bea, “Ric’s” love interest, arrives to find the Boy Wonder preparing to fight alongside Robin and the Red Hood. But then, in a move only surprisingly to his former teammates, Dick turns on them and immediately proceeds to pound their faces in. 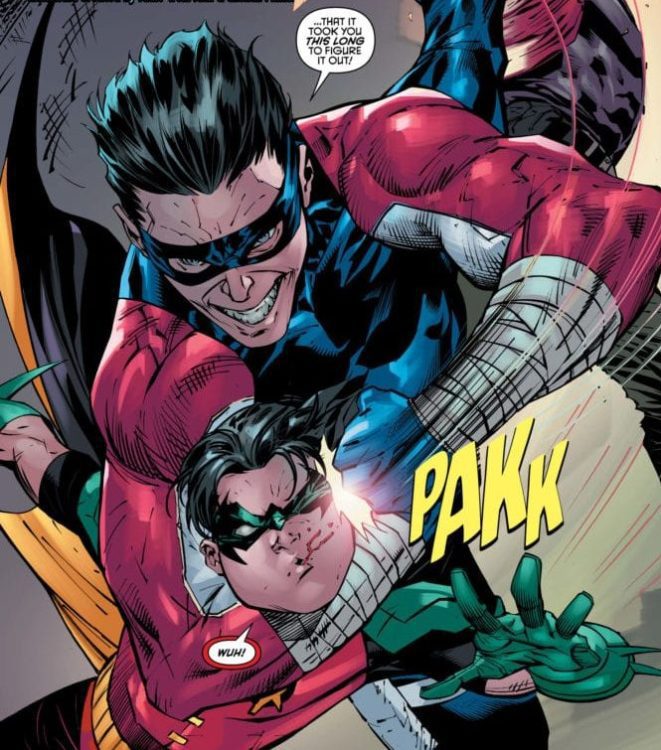 However, the key panel that completes this moment shows the Joker literally weeping with pride over his new “son.” The madman simply cannot hide the fact that turning a family against each other brings him joy,  and readers (ironically) love him for it. It’s comic characterization at its finest.

Readers soon learn shortly after that a bomb was also placed somewhere in Gotham City, leaving the heroes with another major threat to deal with. Bea, already at her wits’ end, feels hopeless. But like the sun bursting from behind the clouds on a stormy day, Batgirl swoops in to deliver a swift kick of justice.

The fight only gets more exciting from there with the special appearance of another notable member of the Bat-Family. Throughout this and the following scenes, writer Dan Jurgens demonstrates an ability to up the ante at the perfect pace.

Ryan Benjamin’s penciling and and Richard Friend’s ink work is fantastic; the panel showing Dick’s reveal as “Dickyboy” to his former teammates embodies the Joker’s very essence. His entire expression, while on the surface “happy,” contains that unnameable menacing quality fans associate with the Clown Prince of Crime. 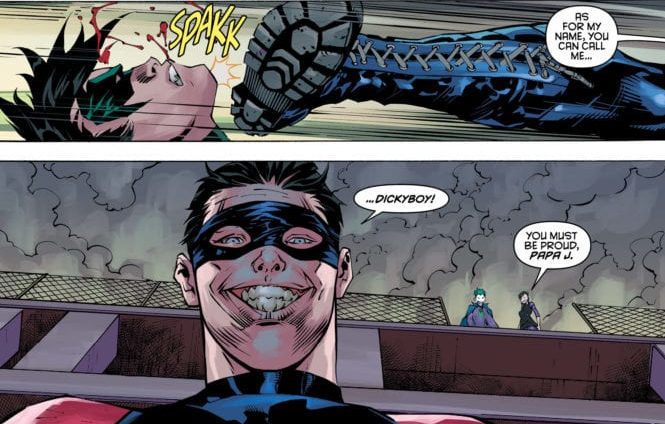 Rain Beredo’s coloring gives life to these and other impressive illustrations. Through a mix of darker shades and unnaturally bright hues, readers are kept fully engaged with the narrative. In addition, Andworld Design’s lettering tells the story in its own way through the use of bold fonts to emphasize Dickyboy (and the Joker’s) emphatic manner of speaking.

All in all, NIGHTWING #74 closes one door while opening five more. We are anxious to see what the future holds for this hero who’s mind has undergone so much trauma.

What do you think the Joker’s ultimate goal is? Let us know in the comments below!

NIGHTWING #74 upends readers' expectations just as its predecessors in this arc.Review: NIGHTWING #74 — A Thrilling Battle For Dick Grayson's Heart