It's never worth it to get on Emma Frost's bad side

Gerry Duggan has taken control of one of the most popular teams in comic books with the X-Men. He’s been building up his team issue by issue and showing the readers that it takes time to gel. This week, he gets to write Emma Frost in Devil’s Reign X-Men #3. Frost is not on Duggan’s team book, but she is a character that shows up from time to time in the title. With a whole mini series devoted to Emma, we get to see what Duggan can do with one of the most polarizing telepaths in comics. Joining Duggan on this issue is Phil Noto on pencils and colors and Cory Petit on letters.

Gerry Duggan not only gets the privilege of writing Emma Frost this issue, but he also writes an underrated favorite character, Union Jack. The interaction between Emma and Union Jack is pleasant, even though the two characters clearly have different objectives. Duggan uses these opening pages to show us just how dangerous Emma Frost truly is. Even though Union Jack’s people are prepared for Emma, with a power dampening collar, she still finds a way to get out of her arrest. Duggan also allows us to see Emma’s softer side as she meets up with the young girl Isabelle from the previous issues. What works with the dialogue in these pages is how genuine it feels. Both Emma and Isabelle are written as smart characters, and when they speak to each other, they’re honest. Isabelle asks why she wasn’t mind wiped and Emma gives her the truth. Duggan does deliver a final blow to Kingpin from Emma that is one hundred percent in character for her. Duggan doesn’t have Emma pull any punches in her confrontation and solidifies her as a mutant you should never cross. 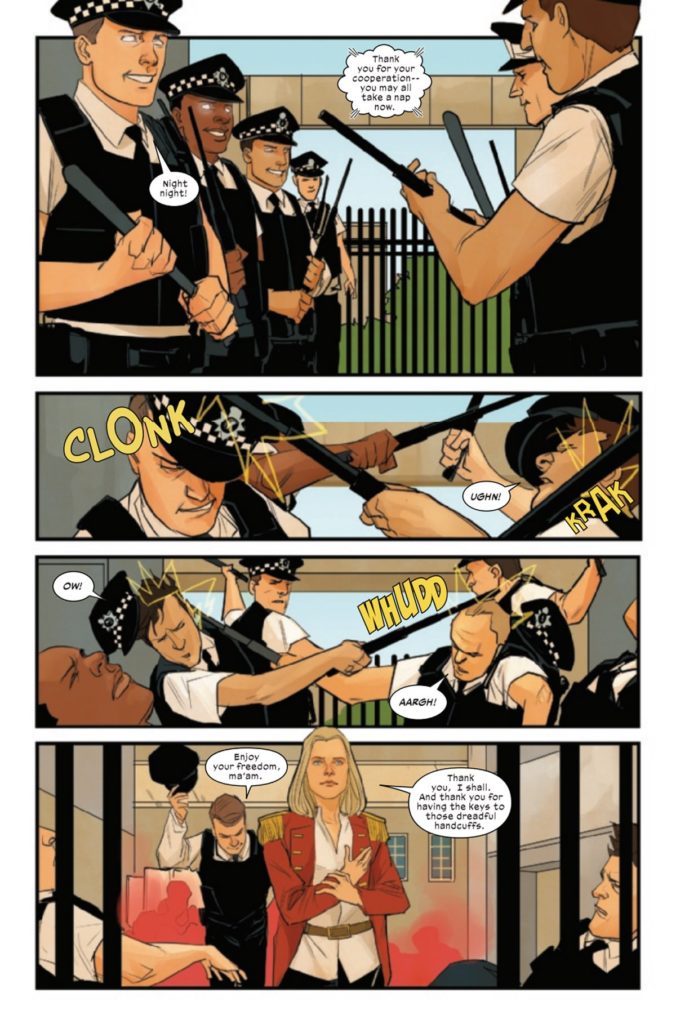 The pencils and colors in this issue are done by Phil Noto. Noto’s pencils are clean and easy on the eyes. Action sequences flow nicely, like police officers hitting each other with their nightsticks. Emma’s escape is handled well, as Noto takes us panel by panel on how she gets out of her handcuffs. The panels of the police officers being mind controlled is eerie. Noto gives the officers smiles on their faces as they spray one another with bear mace. Noto’s pencils work well with the script and give the reader a smooth reading experience.

As mentioned above, the colors are also handled by Noto. The color palette for this issue is light and many of the background panels feature a bland peach color to them. Noto applies a nice red hue on the page as gas grenades fly from the officers as they squabble with each other. Noto’s colors shine most on the uniforms that people wear. Union Jack’s outfit has a nice contrast of dark blue and vibrant reds. As Emma leaves captivity, her red coat is eye catching.

Cory Petit does the lettering for this issue. Any X-Men issue that features a telepath features the classic mind link word balloon. Petit uses these throughout the issue as Emma talks to dogs or has people do her bidding. When there is an action sequence, Petit uses a “THWACK” to signify a punch has been thrown. It also allows us to see that Isabelle is a skilled fighter and can hold her own against Union Jack. As the fight takes place, when Isabelle lands a punch, the “THWACK” is diagonal and placed where the hit occurs. These little touches show the power behind each swing.