The first season of Derry Girls was a huge hit in the UK and Ireland upon its release. It won people over with its likable and relatable characters, sharp dialogue and great comedic situations. Channel 4 immediately commissioned a second season which has recently been broadcast in the British Isles. It has a lot to live up to.

Derry Girls follows four girls and a wee English fella in the city of Derry/Londonderry in the 1990s. This group sets out to have normal teenage lives, in the midsts of the high-tension Troubles. 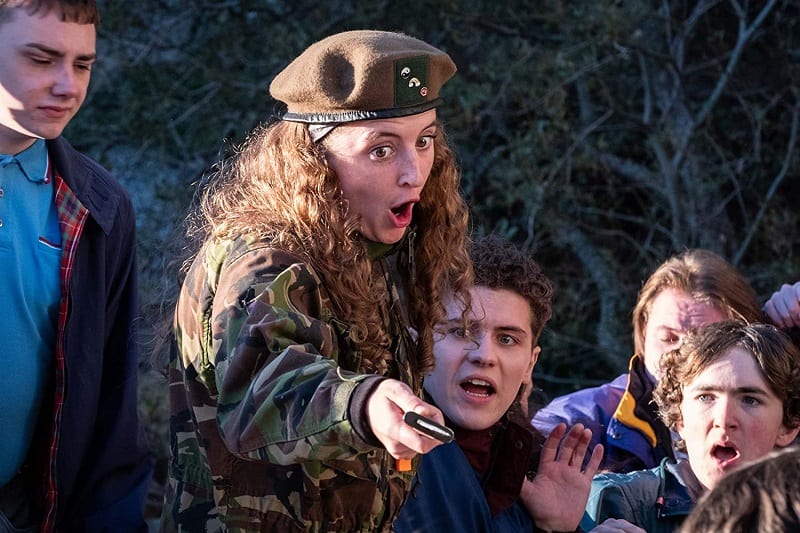 Derry Girls was created by Lisa McKee who grew up in Northern Ireland during The Troubles and that’s what influenced the show. She was able to combine relatable stories about growing up, outlandish scenarios, and show important issues involving The Troubles. And she does it with brilliantly written comedy, embracing ‘90s culture, and being politically neutral.

Within the UK there have been many shows that have tried to copy the formula and success of The Inbetweeners. Examples are BBC Three’s Some Girls and E4’s Drifters. But they often focus on the wrong part – the crude and gross-out humor. The real heart of that show was the characters and their dynamics.

McKee realized this because Derry Girls was about the friendship. The characters dynamics from The Inbetweeners is there, Erin (Saoirse-Monica Jackson) is the “normal” one, Clare (Nicola Coughlan) is the necrotic good girl, Orla (Louisa Harland) is as dim-witted as Neil and Michelle (Jamie-Lee O’Donnell) is the troublemaker. And Derry Girls has the added factor of Michelle’s English cousin James (Dylan Llewellyn). 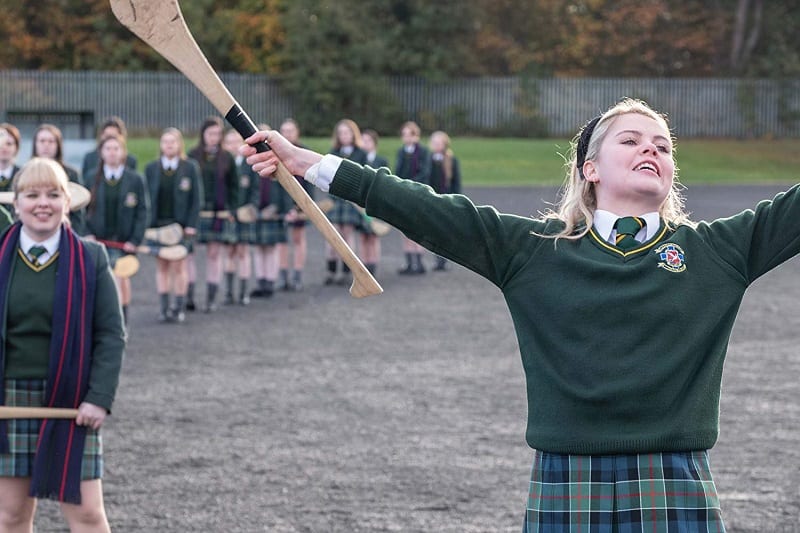 The second season offered more the same which is just fair for Derry Girls fans. It came with six very strong episodes that included two involving the Peace Process and all having some sort of teenage shenanigans.

The funniest episode this season was “The Concert,” and the most emotional was “The Prom.” “The Concert” was a typical teen sitcom story. The group defies their parents and go to a Take That concert in Belfast. McKee was able to combine teenage rebellion, an absurd situation involving an escaped polar bear, and having jokes about regular situations and The Troubles. It was so funny that certain logic holes can be overlooked, like the girls accidentally causing a bomb scare. 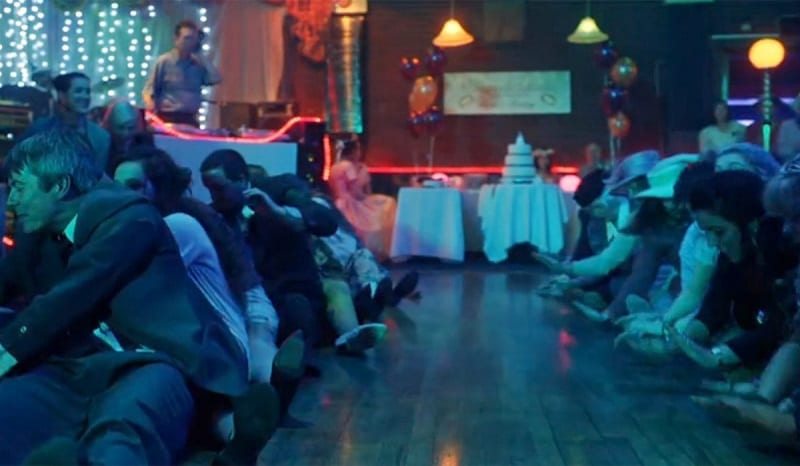 “The Prom” as the title suggests was the prom episode. Its emotional heart was about Erin and the heartbreak she suffers. Fans have compared the episode to the Friends episode “The One With the Prom Video.” It was heart warming and adds fuel to the fan theory that Erin and James will end up together.

This humor throughout the season reminds strong. The dialogue exchanges and lines are as witty as ever. Sister Michael makes lots of biting comments and makes fun of other locations in Ireland. Claire and Orla were the comedic highlights in the season. Coughlan as Claire got to show her comedic range – as well as being a panicky girl Claire Coughlan showed first class drunk acting and a tougher side in the season finale. There needs to be more Drunk Claire and Punk-Ass Claire. 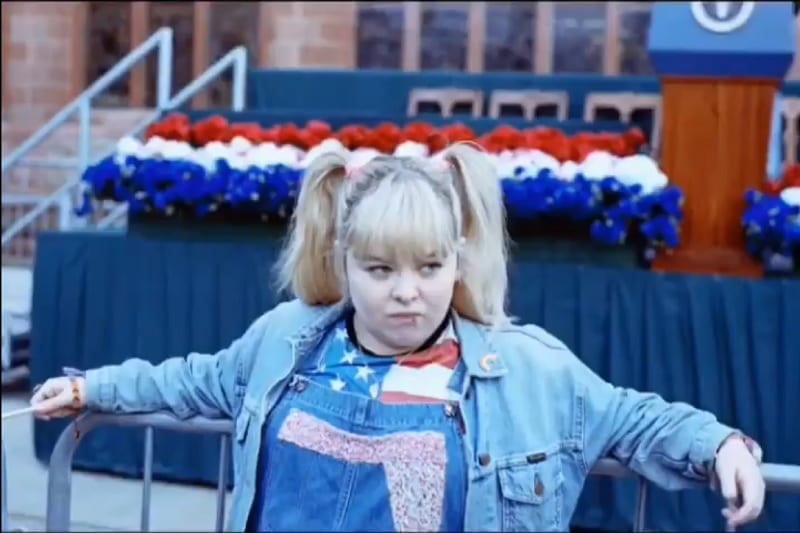 Harland as Orla was often a scene stealer. She often made outlandish statements like The Inbetweeners’ Neil which always raise a laugh. Harland could draw the eye even when in the background. Whether smiling when her friends are panicking or simply eating candy, she commanded the screen.

At times, the second season repeats plot beats and ideas from the first season. The first episode “Across the Barricade” ended the same way as the first season’s opening episode, “Ms De Brún and the Child of Prague.” The final two episodes of this season ended like the final episode of the first seasons, where an important moment happens in the girls life and in Northern Irish history at the same time.

Despite McKee repeating her own structure, she is able to take typical sitcom plots and twist them. This was the case when the girls running away to go to the concert and when Michelle has two dates for the prom. 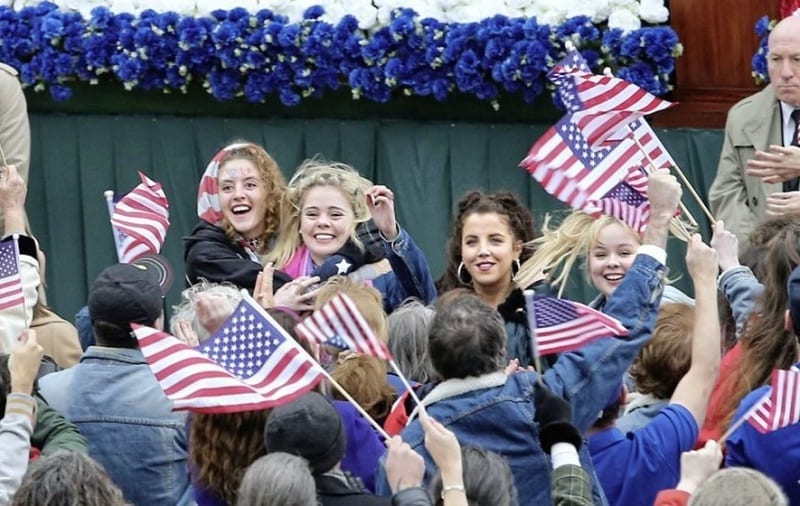 The second season saw Derry Girls attracting more recognizable actors as guest stars, at least for British viewers. The most famous actor was Ardal O’Hanlon (Father Ted) who appeared in “The Curse.” His character played to his strengths – being nice but dim. The season’s guest stars also included the likes of Kerri Quinn (Coronation Street) and Bronagh Waugh (Hollyoaks) in guest roles. The best guests were Quinn as short tempted Pavarotti loving hawker and Judith Roddy who was able to play an inspiring yet self-absorbed teacher.

The second season of Derry Girls will easily please fans of the show, keeping what works. It is a hilarious and a breezy watch because there are only six episodes. Channel 4 has already commissioned a third season.

Review: DERRY GIRLS SEASON TWO - A Hilarious, Charming and Relatable Irish SitcomWill keep fans of the first season happy as well as fans of shows like The Inbetweeners.