DEJAH THORIS VOL. 3 #6, available from Dynamite Comics on July 1st, finds Dejah Thoris and her team locked in combat against the Jeweled Assassin, who may be protecting the source of the End Winter. Dan Abnett’s story and Vasco Georgiev’s art reveals the assassin’s identity and the power behind the coming war.

Lucio Parrillo’s cover work is consistently outstanding. Dejah Thoris strikes a confident action pose with both blasters firing away. Her quintessentially gravity-defying outfit is painted in a Parrillo’s unique style, and the entire scene is laden with the dusty reds of Mars. Parrillo’s painting pulls all of Edgar Rice Burroughs’ iconic components together for a stunning cover.

Abnett’s story starts right in the middle of the cliffhanger fight from the last issue (you can read our review of issue #5 here). Dejah and crew confront the assassin that’s psychically haunted her dreams, and they discover his surprising origin. Meanwhile, Tars Tarkas joins forces with Thuvia for protection against unknown enemies.

Abnett demonstrates he really has a handle on pulp adventure with this issue. The opening fight scene is rowdy, and it concludes with new information that furthers the plot. It’s a fine balancing act between mindless action and thoughtful detective work. The reader will vacillate between the two, both equally well done. With this level of quality, I’d be interested to see what Abnett could do if given another detective/fighter such as Batman, Daredevil, or The Shadow.

Georgiev’s art hits the mark in two key areas. The action sequences are dynamic and slick. You feel every strike when Llana unleashes her fury on the assassin. The kicks, the punches, and glave strikes streak through the panels with a high degree of kinetic momentum. 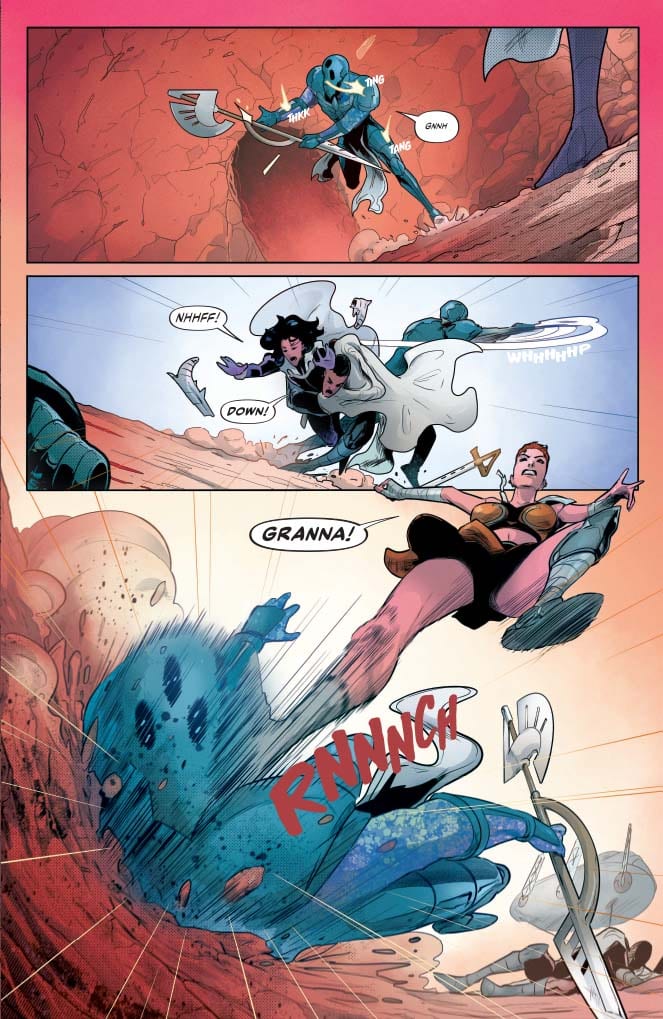 Second, Georgiev put an extraordinary amount of thought and execution into the faces. In particular, when Morokh steps in for a little insectoid mind control, the victim of his psychic work unsettles you with a disturbingly zoned out stare. It’s one thing to draw faces with emotional expression, but it’s another to draw faces that look disconnected from the owner’s mind in a believable way. Great work by Georgiev on this issue.

Dearbhla Kelly turns in another excellent performance with her nuanced use of skin tones on the coloring. Barsoomians have a distinctly reddish tinge to their skin, and Kelly gives the lead character the right tones without looking tacky. The pop of dark lips helps to emphasize the signature red skin by way of contrast to make the distinctively Barsoomian quality stand out a little more without looking like a bad sunburn. 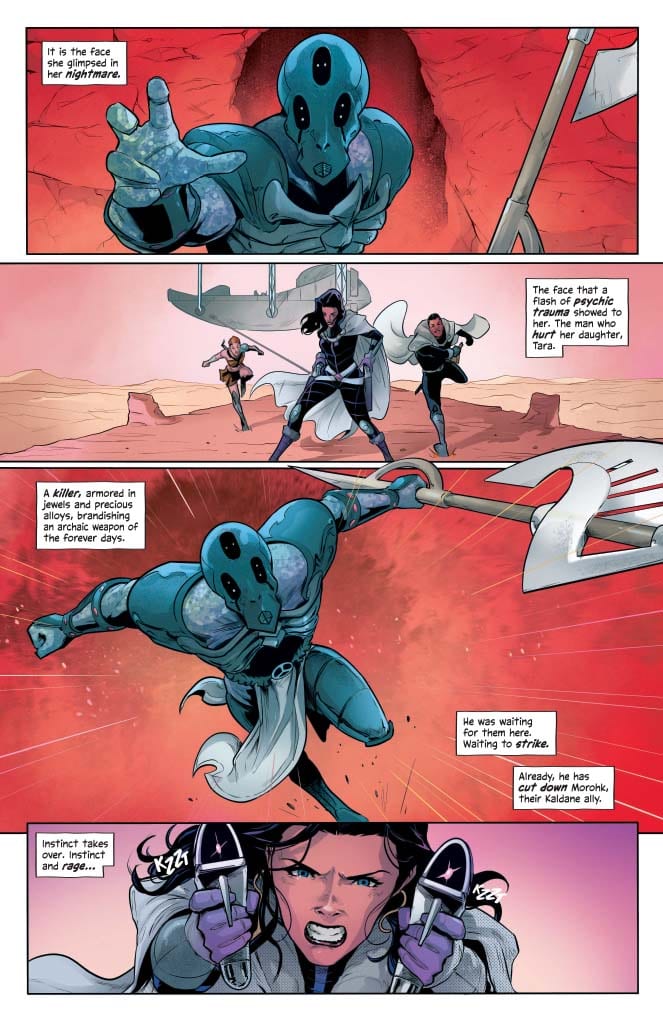 Consistent with the previous issue, Simon Bowland’s lettering makes great use of alternate font colors to emphasize non-human(oid) speech and provide some visual interest. The Kaldanian bug speech’s pinkish-red and the Tharks fern green speech bubbles add a little more alien distinction from one species to the next. As a point of improvement, sometimes the green font with the green fill for Tars’ word bubbles was a little too hard to read. It would have worked a little better if two greens were selected with a higher contrast to make it easier on the eyes.

DEJAH THORIS VOL. 3 #6, available from Dynamite Comics on July 1st, is a great mix of action, adventure, and detective work. The writing is a high-quality pulp adventure, and the art team is firing on all cylinders. The cliffhanger ending will leave you wanting more.

[UPDATE: The article was updated to correctly reflect that Dejah Thoris was created by Edgar Rice Burroughs and not Robert E. Howard]