Cyborgs, dimension-hopping, space bounty hunters…sounds interesting, yes? All that and much more is here in Death’s Head #1, the new title from Marvel.

After a meeting with his employer goes south, Death’s Head finds himself transported to Earth. He revives in the middle of a punk show, only to find himself squaring off against Wiccan and Hulkling of the Young Avengers, and antics ensue.

Death’s Head isn’t exactly an obscure figure. The cybernetic bounty hunter is a cult favorite first introduced in the UK in 1987. In the character’s own way, Death’s Head is a perfect distillation of ‘80s dark age, hyper-violent excess. And, in that spirit, Death’s Head #1 doesn’t spend much time establishing the character, preferring instead to jump right into the action.

The book doesn’t offer readers much time to breathe. It’s one action sequence flowing into another, with Death’s Head intent on killing just about anyone he can get his hands on. It may just be the shared UK roots, but one can’t help picking up on hints of Judge Dredd here, at least in terms of style.

Writer Tini Howard is not shy about weaving humor into the story as well, though. In fact, it’s that balance of humor and action that proves critical to making the story work. The banter between Hulkling, Wiccan, and Death’s Head is among the strongest assets present in Death’s Head #1. There are chuckle-worthy moments spread throughout the book, too (“Drain in floor detected. Statistics suggest that the likelihood of being eviscerated in a room with a drain in the floor is 94%.”) Without that critical counterbalance, the book could come across as very one-note.

That said, there are more subtle themes at play here, too. Even though Death’s Head is the name on the cover, much of the real conflict seems focused primarily around Wiccan. The character’s desire to rejoin The Avengers seems to be central to his development, and to the story at large.

The book provides some intrigue as well, closing this initial issue with a hook meant to ensure readers return. Based on what we see, it looks like we’re in for an interesting ride. 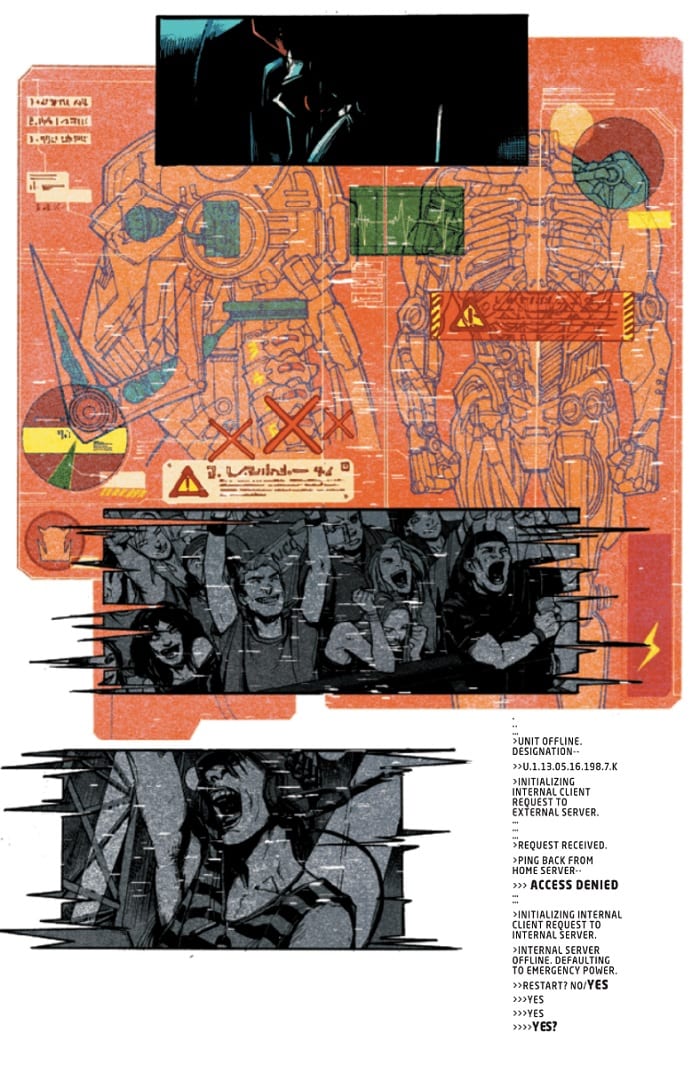 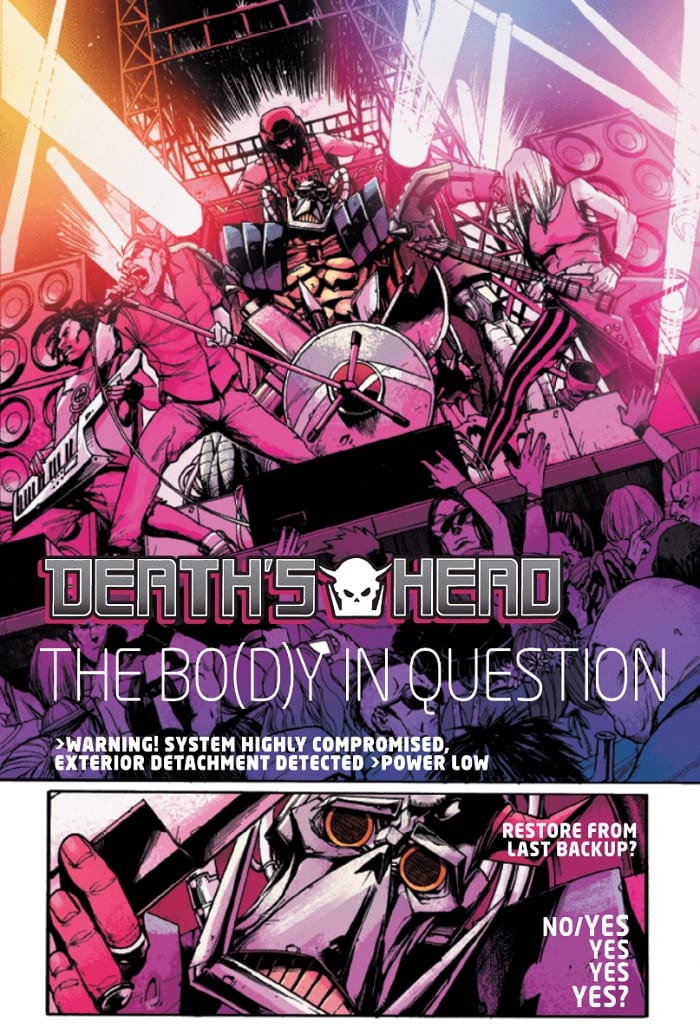 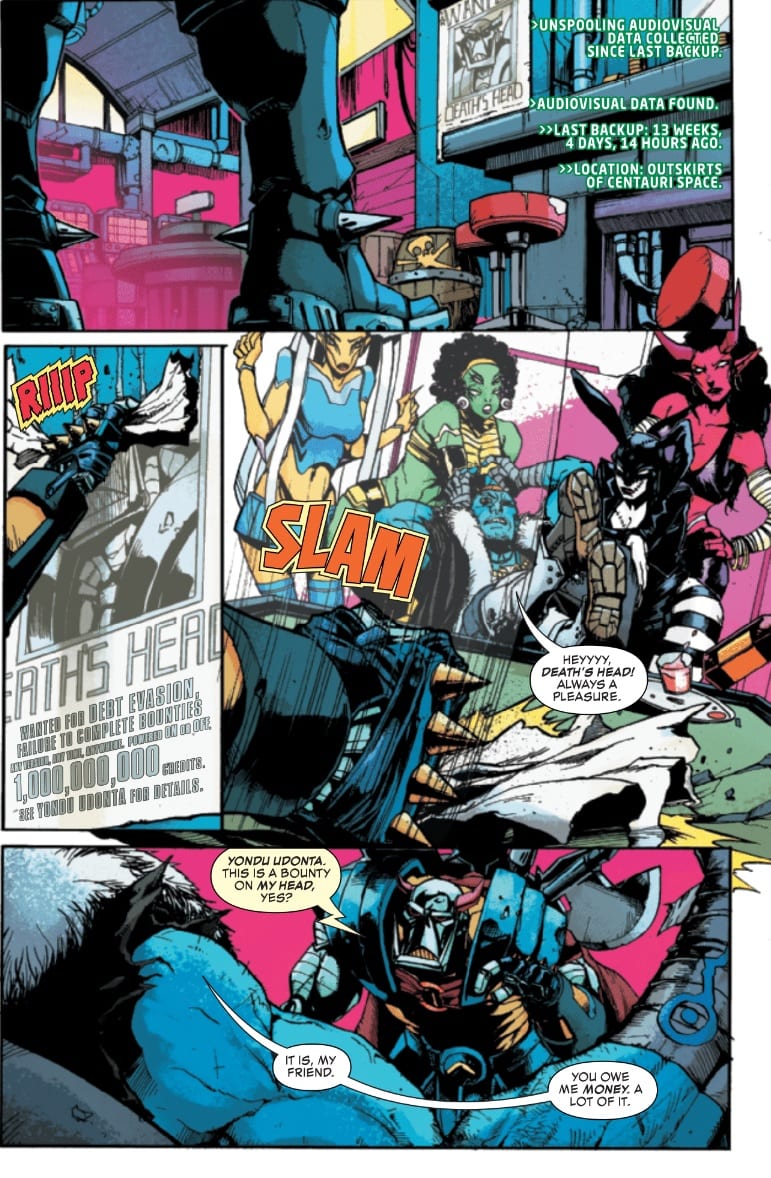 Artist Kei Zama brings some fairly impressive artwork to the table in Death’s Head #1. Her illustrations are dynamic and crackle with energy on each page. This works especially well for the fight sequences through most of the book. Still, it’s richly-detailed, which helps to securely ground the reader, especially in those quieter passages.

The inks effectively convey the mayhem of these scenes. Of course, that does have its downsides, too. Some sequences can be hard to follow, given the constant shifts and unorthodox use of perspective. There is the odd panel here and there in which it’s hard to make out what’s really being shown. Despite those issues in composition, it’s a strong and well-stylized showing overall.

Colorist Felipe Sobreiro employs a wide and very vibrant color palette in Death’s Head #1. The colors can almost overload the reader’s eye at certain times; the effect works, though, underscoring the chaotic action unfolding on the page. Sequences seen through the eyes of Death’s Head employ hazy, yellow-tinged effect that clearly echoes notes of The Terminator, further underscoring the ‘80s action tone.

Death’s Head #1 is a great beginning for Marvel’s new miniseries. If you’re in the mood for big guns and mile-a-minute action, you won’t want to miss this one. Pick it up July 31 at your local comic book shop.

DEATH'S HEAD #1 is a great beginning for Marvel’s new miniseries. If you’re in the mood for big guns and mile-a-minute action, you won’t want to miss this one.Review: DEATH'S HEAD #1 - Big Guns And Mile-A-Minute Action