Be ready to party, fans of Deadpool, because it’s Wade’s 30th birthday and you’re all invited. Available now from Marvel, Deadpool Nerdy 30 #1 is an eight-part anthology celebrating the 30th anniversary of the character’s first appearance in The New Mutants #98.

Nerdy 30 strings together eight loosely connected, semi-biographical shorts. They follow Deadpool from conception to death, then finally to the inception of the character in New Mutants in a meta, tongue-in-cheek ending. Part retrospective, part birthday party—all delightful. 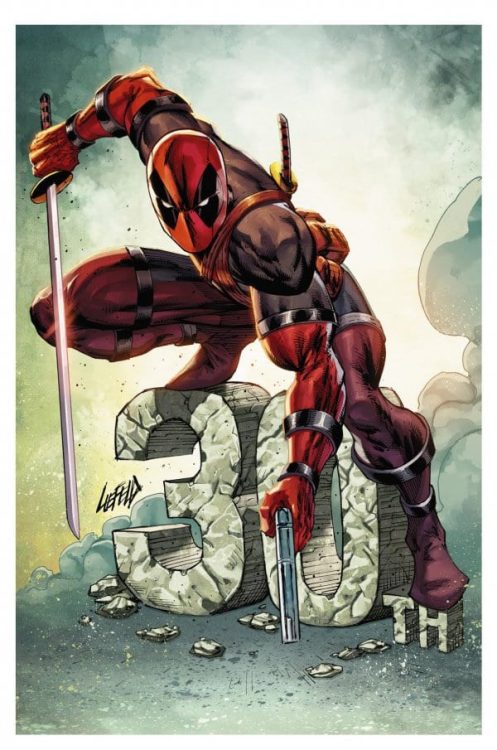 Each story is entertaining on its own, thanks to some returning favorite creators. But there are a couple stand-outs. The first of which is story six entitled “No Chill Whatsoever.” Written by Marvel mainstay Daniel Way and drawn by his frequent collaborator Paco Medina, “No Chill Whatsoever” layers a neo-noir style over Deadpool’s childish pursuit of a birthday cake.

It’s Deadpool’s birthday, and no birthday is complete without a cake. So, instead of turning in a drug chemist to the C. I. A., Deadpool handcuffs the man to a rack inside the freezer of an ice cream shop. Medina’s bold outlines and dusty, charcoal-like shading coupled with colorist Jesus Aburtov’s pastel blue, purple, and green create a sense of whimsy that is complementary to the writing.

Moreover, (without revealing the story’s ending) Deadpool manages to get in a final word against C. I. A. corruption, which gives this non-violent short a little punch. It’s classic ‘Pool: adventurous, hilarious—and socio-politically relevant.

The second standout was story seven, “Party for One.” As the penultimate story, “Party for One” follows Deadpool as he’s close to death. As usual, he’s got himself into a multi-villain conflict and is now dealing with the consequences. Writers Duggan and Posehn take Deadpool’s habit of talking to himself to a hilarious existential extreme. Deadpool mocks himself, sings, and questions his life, while confined.

Artistically, Koblish ups the melodrama of it all by using a cinematic style, especially in the latter half of the story. Deadpool flashes back to the conflict that lead to his current predicament. On one page, we get a dramatic medium shot panel of an injured Deadpool. Next, an overhead of Deadpool getting shot. Then, finally, Deadpool stumbles away from a burning city, negotiating with another villain. It all looks and feels like one of Marvel’s big blockbuster movies. 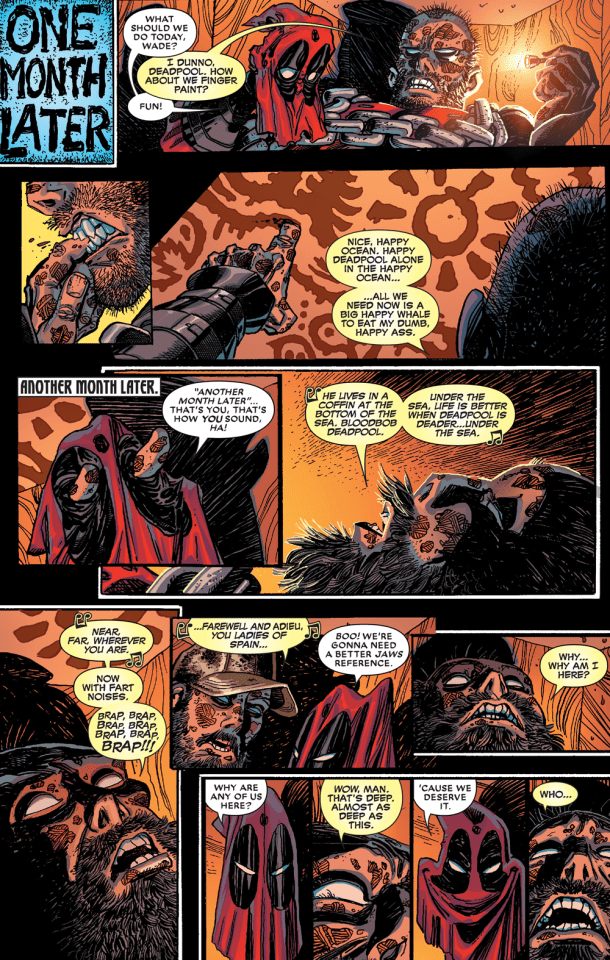 Filardi’s contrasting cold light blues and warm orange, the latter framed in black, gives a sense of shifting time and space. The colors also contribute to the overall gravitas. But in no way does “Party for One” ever feel too serious. It’s tongue-in-cheek and self-aware as this story seems to mock every self-serious comic book hero’s near-death experience. It’s as if Duggan, Posehn, and Koblish have let us in on their inside joke.

Even though there’s a lot to love about it, Deadpool Nerdy 30 #1 isn’t flawless. My only problem with this anthology is the lettering. Sabino’s lettering is functional for the most part, but his tendency to place SFX in corners and his placement of speech bubbles takes some of the fun out of the read.

One too many times I found myself puzzled by a speech bubble tail pointed toward a character’s chest or leg instead of their mouth. In my two favorite stories, there are instances of SFX tucked so close to the corner that my eyes almost missed them as I scanned the page.

Despite my lettering nitpicks, Nerdy 30 is still a wild ride and a comforting hug to long-term fans of Deadpool. So, if you haven’t already, give yourself an excuse to celebrate and pick up this special issue!

Elizabeth Buck
Cat parent, TV lover, and hater of cake living in Northern California. Educating and entertaining through the written word is the game.

Full of lowbrow gags, innuendo, and the good ole Cable appearance, Deadpool Nerdy 30 #1 has everything you love about Deadpool. It's part retrospective, part showcase—and a whole lotta fun.Review: DEADPOOL NERDY 30 #1—Party On, Wade