Image’s Deadly Class by Rick Remender, Wes Craig, Jordan Boyd and Rus Wooton continues to be one of the best books in the medium with another intense, somber and absolutely gorgeous issue. This is sequential storytelling at it’s best.

From Image- BONE MACHINE,” Part Two A nice, relaxing trip to a remote cabin in the woods—what could go wrong? 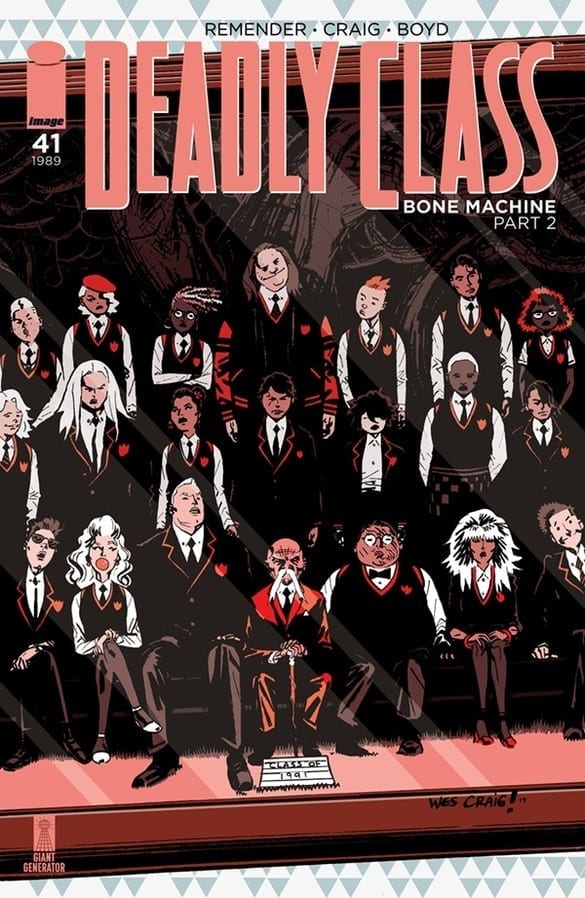 After a couple of issues with some big action, violence and turns, Deadly Class #41 slows down a bit. The bulk of this issue is spent inside the thoughts of the main character Marcus. This allows writer Rick Remender to bust out a first-person narrative. Remender is an excellent writer, and as much as Deadly Class is a sort of high concept comic, it’s when Rememender gets inside the heads of his characters that his talent really shines. Marcus’ thoughts tell us how much the character has changed since we first met him; he’s less angry young punk and more of a morose assassin and sort of school leader. But he still sees through the bullshit at King’s Dominion. Remender’s prose here flows with elegance, yet feels like the thoughts of a teenager (albeit a smart one who is also a deadly killer). It’s a tough balancing act the scribe has been able to pull in every issue.

The biggest plot development here is Saya’s return to the school and the reaction she gets from her re-appearance. Her return signals a big status change for the former bad-ass Yakuza, and where Remender takes Saya’s story from here is going to be a ride.

The end of the issue takes us out of Marcus’ head and we get our most plot-driven scene in the issue. The scene takes place in a carnival and ends in a murder, but it plays out like kids hanging at a fair. That dichotomy has always been one of the titles’ strongest narrative tools.

Remender’s dialog also continues to be great. His teenagers talk like kids do, but there’s an element of word weariness to their talks too. These kids may be kids, but collectively they have been through more shit than any adult.

Of course, the art is fucking fantastic. Since the first issue, Wes Craig has done nothing but create sheer comic book magic on every page. Deadly Class #41 is no different. Craig continues to create some of the best page layouts in modern comics. There is a balance and flow to his panels that draw on everything from Frank Miller to manga. His linework is also highly energetic, yet is clearly meticulous in composure. His inks give everything weight and form.

When you add in Jordan Boyd’s colors, everything comes alive. Boyd is one of the best colorists in comics and pulls from a diverse palette that changes in order to suit mood and atmosphere.

The lettering in this issue is also a knockout. This issue (like a lot of Deadly Class) is very heavy on the number of words on a page. But letterer Rus Wooton’s clear letters alow for easy reading and his font just looks fucking good on the page. The layouts allow for heavy busts of words, yet it doesn’t take away from the art at all. It’s in fact integral to the whole package working. All you have to do is read the great sequence at the end of the issue to understand. It all comes together.

Deadly Class #41 is another great issue in one of the best on-going titles you can get right now. Comics like this are the reason you want to go to a store every week or month and not trade wait or read digitally. You want to hold this book and you want to flip these pages. It’s time you all attended King’s Dominion if you haven’t yet.

Comics like 'Deadly Class' are the reason you want to go to a store every week or month and not trade wait or read digitally. You want to hold this book and you want to flip these pages. It's time you all attended King's Dominion if you haven't yet.Review: DEADLY CLASS #41- Reunions and Ruminations