With Deathstroke building his army, who will rise up and stop him?

With the Justice League dead, the villains of the DC universe have started taking over in this week’s Dark Crisis #3. The younger heroes and legacy characters get a chance to shine under Joshua Williamson’s pen. Can they inspire as much hope in a world that seems to be more hostile than ever? Daniel Sampere is responsible for bringing these images to life on the page. He’s joined by Alejandro Sánchez on colors and Tom Napolitano on letters. The combined might of this creative team may not be able to bring the Justice League back, but they may be able to save the day. 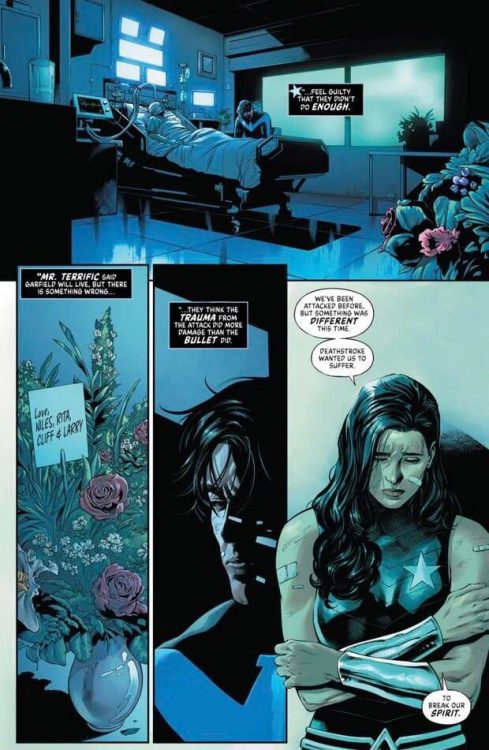 With any big event comic, writers have to juggle multiple story threads. Joshua Williamson is dealing with three major chapters right now: Jon Kent trying to form a new Justice League, Deathstroke and his plans to take over the world, and the Green Lantern Corps investigating space. All of these stories are necessary, but the Green Lantern story reads the most interesting to me. Williamson gives us a nostalgic feeling with this part of the book that lets us see all of our favorite Lanterns work together to save the world. Seeing Kyle Rayner actually get something to do in a big event is worthy of praise. Williamson also brings us full circle with the team up of Kyle, Hal Jordan, and Jo Mullein. These characters represent different eras of the lantern for readers. Each has their own fan base and each has their own style of wielding the ring. Williamson continues to show us the struggle of the younger heroes as Jon Kent and his new team deal with Black Adam. We have two different ideologies represented here. Jon Kent represents a new way of dealing with problems and villains. Black Adam represents the old way. He’s also the last remaining member of the Justice League. The tension here feels legitimate. Black Adam doesn’t want to take prisoners, and sees the situation from the eyes of a battle-worn veteran. Jon is idealistic and wants to try a different approach. The Deathstroke story line doesn’t take up much panel time this issue, but there is still a moment of great impact. For an event that got a lot of criticism when it was announced, Dark Crisis has been an exciting read.

The pencils this issue are handled beautifully by Daniel Sampere. His work continues to impress and is nearly flawless. As the Green Lanterns gather, although they are off in the distance, Sampere is so detailed that each character is easy to make out. There are several panels in this issue that stand out. Sampere brilliantly draws heroes coming to help join Jon Kent in his mission. The line work, the detail, and the background are all perfect. It’s a ray of light in this dark story. Hal, Jo, and Kyle descending into madness as they are haunted by images from their past is also iconic. Twisted versions of themselves flood the background as they enter the unknown. Daniel Sampere continues to cement himself as one of the best artists in the comic book business.

The colors by Alejandro Sanchez set a tone for being moody. Even though the Green Lanterns are vibrant and leap off the page, the background is a dark blue and black. When Kyle, Jo, and Hal enter the black lantern, Sanchez treats us to bright green for our heroes and dark black and gray in the background. This issue has some of the best colors you’ll find in a book this week. Sanchez is successful in blending the dark and the light together to give readers just enough hope.

The letters are provided by Tom Napolitano. Letters play a crucial part in this issue because there are a lot of sound effects. As Ravager kicks an enemy, Napolitano places a “Crash” lined up perfectly with the villains back. There are panels where several characters are talking all at once, Napolitano makes sure that everyone is seen and that no word bubbles block any character. Distorted word balloons also play a role in this issue. As the Green Lanterns fall into the black lantern, a word bubble that is misshapen appears in the center of the page. Napolitano makes it feel almost demonic, and it works very well. 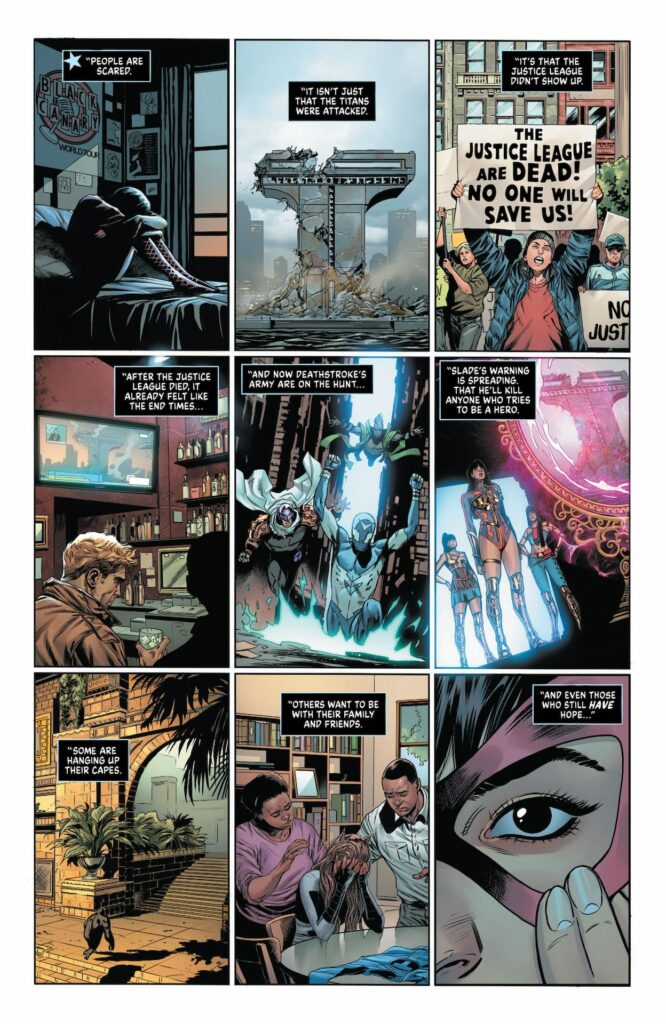 Dark Crisis #3 has been just as good as you would expect. This series has exceeded expectations and will leave you wanting more. Joshua Williamson has written another good issue that puts all of the DC universe in danger and no one is safe. The art continues to impress and leap off of the page. Dark Crisis #3 is available at a comic shop near you!

The third issue of DARK CRISIS continues to juggle the plot lines rather well. The addition of the Green Lantern Corps ushers in more excitement for this event.Review: DARK CRISIS #3 Raises The Stakes For Our Heroes