New heroes emerge when the world needs them most

The Justice League is no more. As fans of DC Comics, we enter into the Dark Crisis. There may not be a worse time in the DC Universe than right now. The pillars of the DC Universe are dead; who will step up and take charge in this time of need? Joshua Williamson is the architect for this series and the writer. Daniel Sampere lays down the pencils with colors by Alejandro Sanchez and letters by Tom Napolitano.

There is a lot to unwrap this issue. Some of this issue deals with Jon Kent attempting to assemble his new Justice League. Williamson handles this part of the issue well. Jon isn’t Clark. His attempt to pull some strings doesn’t have the same weight that Clark has. He’s met with many no’s in his attempts to recruit heroes. Williamson paints a world for the reader where hope and faith are lost. Citizens hold signs saying the end is near. Villains are attacking non-stop. The world needs a new Justice League, and they need hope. This issue sets the tone for what we’ll see throughout the following seven issues. Williamson has laid down the groundwork. From here on out, it should be an action-packed thrill ride that brings new heroes to the forefront of the DC Universe. 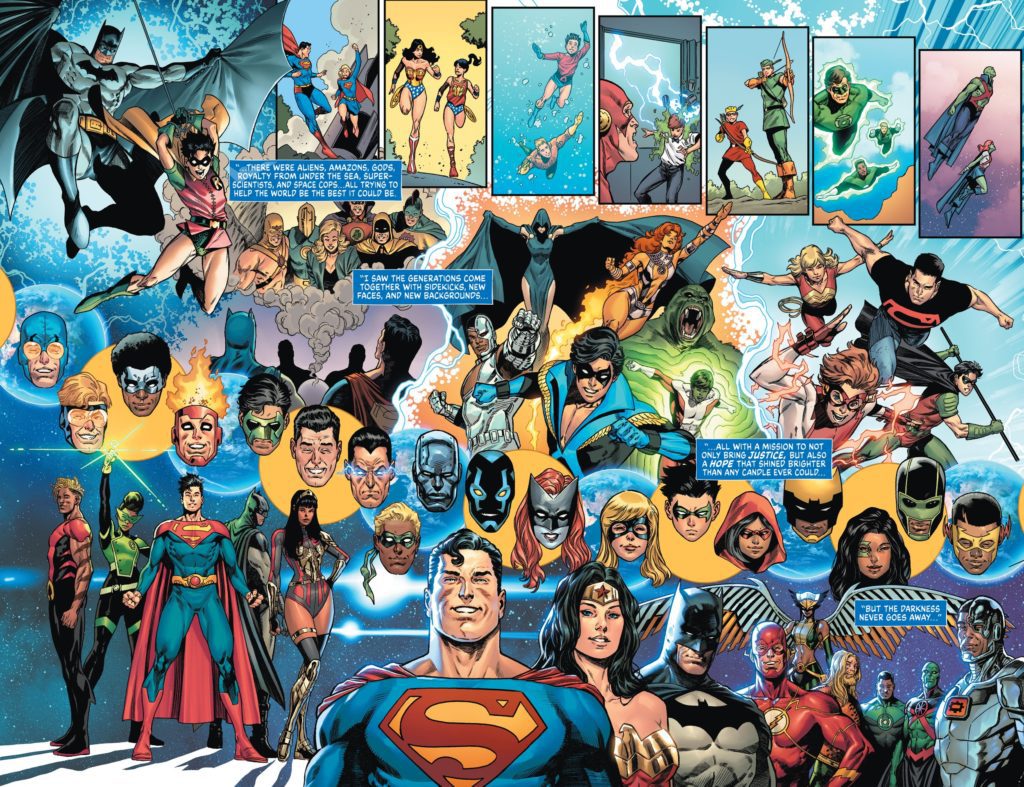 Sampere is absolutely on fire this issue. His pencils give us gorgeous panel after gorgeous panel. Action sequences are drawn crystal clear. Yara and Jon punching a demon together is beautiful. Sampere puts everything he has into this issue to make it the best possible book he can. This comes through on the page. No panel lacks quality. Even when multiple characters appear in small panels during the Justice League recruitment, Sampere makes everyone look amazing. The art in Dark Crisis #1 is flawless.

The colors by Sanchez go hand in hand with what Sampere lays down. Sanchez’s vibrant colors allow Sampere’s pencils to leap off the page. Jon visiting the statues erected for the fallen Justice League is colored wonderfully. Sanchez allows the backdrop to have the sun shining on the fallen heroes perfectly. When things turn grim, the backgrounds and colors get darker too. As villains descend on Titans Tower, the sky is dark, and Sanchez uses heavy blues on the page. This shift in color also represents a shift in the tone of the story. Earlier, Wally and Jon took care of low-level villains. The sky was bright, and things were easy. The colors get darker when the heavy hitters arrive and the fights get harder.

The letter work by Napolitano is effective. One of the best-lettered panels in the issue is when Booster Gold and Blue Beetle fist bump. Napolitano uses a “bros” placed right above their heads as they bump. The sound effects are incredible on this issue as well. As Batman chases a car full of criminals, gunshots “bang” fill the page. Insane laughter from the criminal outlines his face. Napolitano fills up pages with the little sound effects we all expect to see in comics. He makes them feel alive, and that makes a massive difference in this book. 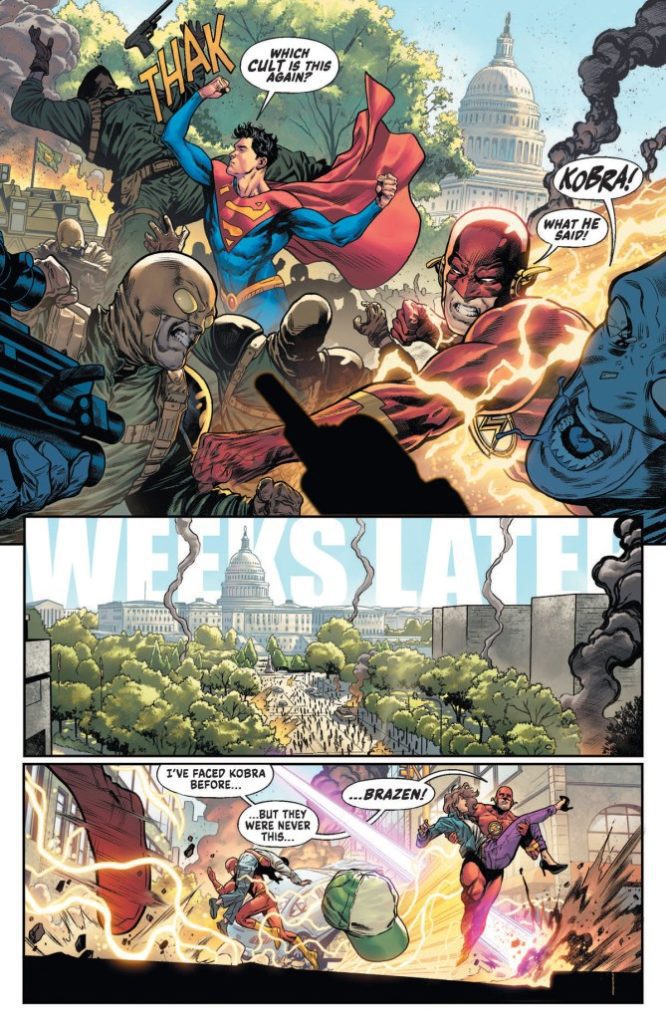 Dark Crisis #1 is an excellent start to an exciting event. Williamson is a writer who crafts good stories and can do something great. You honestly can’t say enough about Daniel Sampere’s pencils on this issue. His work is as perfect as you can get in comics. Dark Crisis #1 is on sale at a comic shop near you!

The most important part of tragedy is seeing the strong heroes who step up nextREVIEW: DARK CRISIS #1 Gives Us A Reason To Believe Again