Danger Street, a new series for DC Comics from writer Tom King, artist Jorge Fornes, colorist Dave Stewart, and letterer Clayton Cowles, has no right being this good. You’d think a story like this would feel stretched thin. It has fantasy characters, gritty noir detectives, sci-fi aliens, and superheroes, among others. But as these characters and genres war for your attention, they create a dazzling spectacle in their wake that just works.

This is not the first time all of the characters in Danger Street have seen print. In fact, all of them appeared in a series from 1975, called DC’s 1st Issue Special. The 13 issue series was experimental, strange, but somehow it was also incredibly charming. Each issue was its own story and none of the stories were connected. All the characters existed in their own little worlds. So, when King, Fornes, Stewart, and Cowles signed up for a series that would bring all these characters back, it wasn’t as simple as “updating” an old book. This creative team had to figure out how a banished alien general could be connected to a group of child millionaires (yes, you read that right.)

King takes this challenge of combining stories and does you one better. Every page, almost every panel, combines storytelling styles. The narration, in bright yellow caption boxes, sounds like something out of an old-timey children’s fantasy book, overlaid onto scenes of intense action. But, it’s not so much the combination of genres that interests King, as it is the combination of these characters. In an interview with Monkeys Fighting Robots, King explained that the inspiration for Danger Street came from FX’s Fargo series, along with the movies of the Coen Brothers (which, themselves, inspired Fargo.)

The Coens have a knack for taking wild characters with crazy quirks and just putting them in the same place to see what will happen. That’s exactly what Danger Street #1 feels like. King immediately gives you a sense of who each character is, and then lets their interactions lead to widespread chaos. The experimental attitude of “let’s throw things together and see what happens” seems to have carried over from DC’s 1st Issue Special. You’ll be on the edge of your seat by the final page, because you’ll have the distinct feeling that anything could happen next. 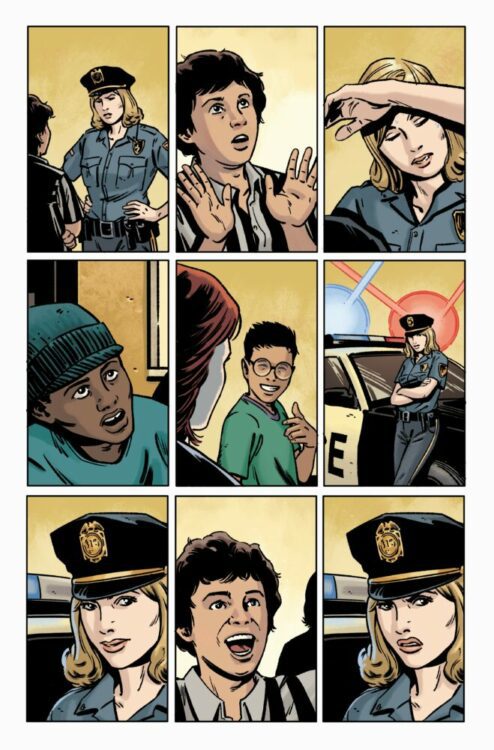 Fornes’ art is beautiful, but it’s also profoundly interesting. For one thing, we see a real deliberate use of the levels of each character’s gaze. When Starman talks with Warlord, he looks down a little, even though they’re sitting at the same height. When Manhunter bows before his master, we see Manhunter looking up in a way that almost feels feeble. And when Jack Ryder washes his face in the mirror, he actually is looking up a little at his own reflection. Fornes tells us something about the dynamics between all of these characters. We see how the characters feel about one another – estimate each other – by where they’re looking. We even see how much Jack Ryder looks up to himself.

Another brilliant moment is when we see Warlord, Starman, and Metamorpho driving down the road in a car together. Fornes gives us one image of the car that’s been split into two panels by a gutter running through the middle. Warlord sits on one side of the gutter, Metamorpho on the other, and while Starman sits mostly to one side, the gutter actually cuts through him. Starman feels like a character who is caught in the middle of a lot of things, and Fornes uses this visual cue to tell us that subtly.

Stewart absolutely highlights the uniqueness of each world that these characters inhabit. The Dingbats of Danger Street, Lady Cop, and even our trio of Starman, Warlord, and Metamorpho, all look quite normal on the page. Metamorpho sports skin of purple and orange, and Starman is blue, but besides that they all live in worlds that are your typical hues of grey, brown, and green. When we see Manhunter, things are different. The panels Manhunter sits in are panels of gaudy, bright colors. The page after Manhunter’s introduction shows other characters driving through the desert against a white background. It’s nearly colorless in comparison. Stewart is really showing what diverse people we’re dealing with.

Stewart even shows how some characters are divided against themselves. We essentially see three versions of Jack Ryder. One version is the brightly clad Creeper, jumping through the darkness of a back alley, looking like a firefly in the night in his yellow costume. But as he lays into a thug, the colors fade until there’s nothing left but black, white, and the vibrant red of blood. The next page shows Jack clearing the blood off of his face in the mirror. The whole page is incredibly muted in its tones, you almost forget the Creeper and Jack Ryder are the same person. Stewart is doing so much with these simple choices. We get a window into the hearts and minds of these characters. 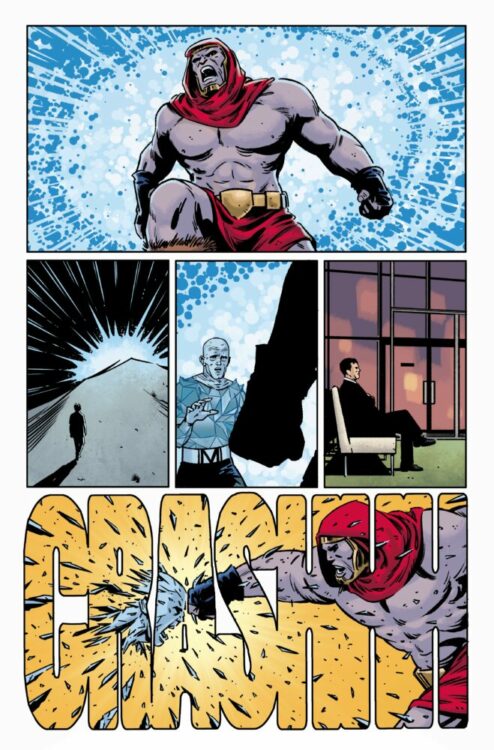 There are so many brilliant choices from Cowles in these pages. Even small things, like a cop car’s sound effects being shown in alternating letters of red and blue. Or, when we see the laughter of the Creeper, looking like it’s been painted in blood against the page. Cowles writes the “VROOOM” of a dune buggy driving down a hill with the letters getting smaller the further the buggy gets away from us. But it’s in the smaller details that the magic really happens.

As shit really begins to hit the fan, we see Cowles’ letters begin to vary more. The “AAAAAA!” of someone getting grabbed by the throat is staggered, like the noise out of their mouth comes out unevenly. Another character looks on and simply says “What?” in small lettering on a large word balloon, which is echoed in format by another character’s ominous line of “No” only a page later. It’s stuff like this that just make this comic sing.

Danger Street #1 is an incredible start to what’s going to be an amazing series. Danger Street is simply fearless. It brings together a wild cast of characters, and a superstar team of creators, and lets beautiful chaos reign. You do not want to miss this fantastic issue, which is out now at a comic shop near you!

Danger Street is simply fearless. It brings together a wild cast of characters, and a superstar team of creators, and lets beautiful chaos reign.Review: DANGER STREET #1 is a Glorious Mishmash of Genres