Crossover #1 is the new series, out now from Image Comics, that you need to pick up. Full of extraordinary situations and genuine emotion-provoking scenes, Crossover is sure to be a series you won’t want to miss.

About the Book:
The heroes that we know from comic book pages have become real, and the damage they have caused is horrific. They are now contained, but the world has drastically changed because of their presence. Now, one girl is about to find herself wrapped up in a situation unlike any she’s experienced before. 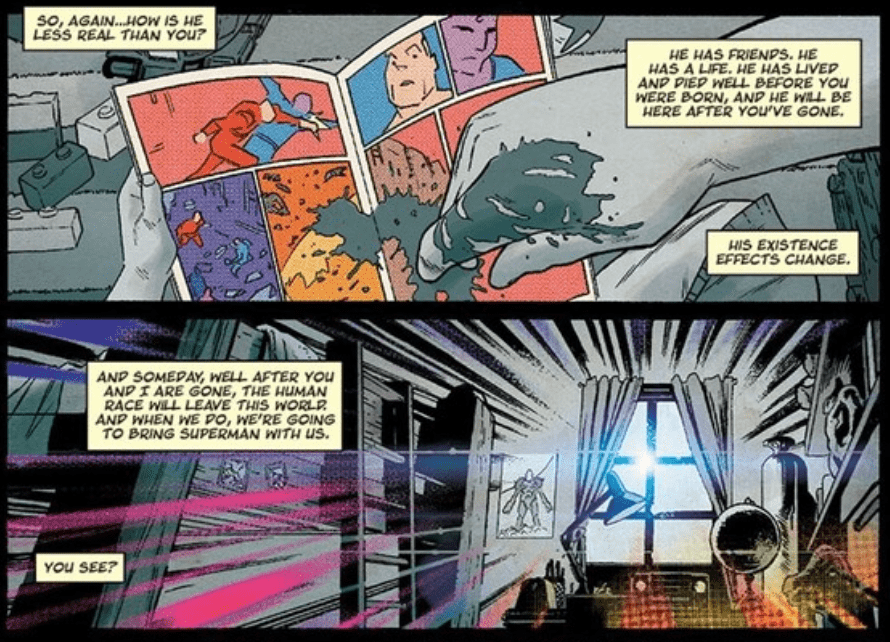 This issue was an absolute pleasure to read. Donny Cates does a brilliant job of immersing us into this entirely new world that once was like ours but has been changed by the appearance of superheroes. We get this wonderful glimpse into so many aspects of this world, and yet by the end of the issue, we have barely scratched the surface of what it has to offer. First, Cates uses an unknown narrator to explain to us what transpired that caused the world we see to become so different. Then the narrator introduces us to the main character, who we follow throughout one of her typical days. Her everyday life shows us a completely alternate version of a location I’m sure many readers are very familiar with, highlighting how much the world has changed. When the main character’s typical day no longer becomes as typically, Cates can give us circumstances that will lead to the main character and the reader being able to see more of this fantastic world. Crossover #1’s story also coves quite a few serious themes and successfully pulls at the reader’s heartstrings. The transition into this entirely different world is seamless, and it would be difficult to think of a way to do it better. 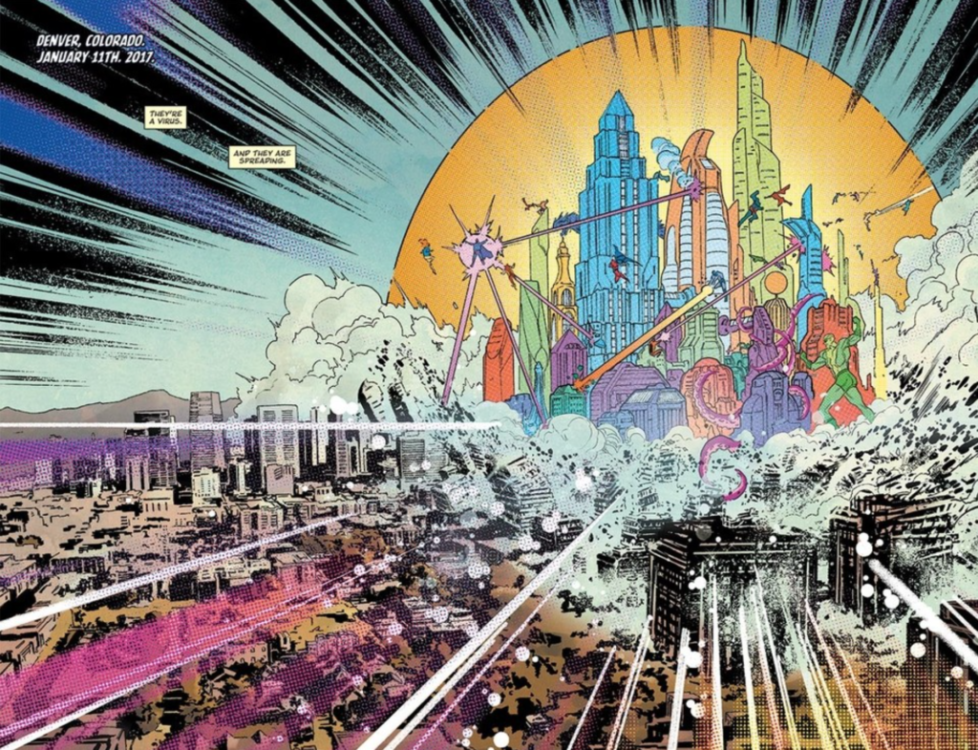 Geoff Shaw provides some stunning art in Crossover #1 that is integral to making the issue such a wonderful experience. Having the heroes drawn in a style that reflects old comic books – with them covered in dots – creates a nice contrast to the other characters’ sharp lines and scenery in the issue. Shaw also enhances the issue with his remarkably expressive drawings and detailed faces. There is wide diversity in his characters through body type, race, and physical appearance, making the world seem more realistic. Panels filled with many people reflect the many different individuals we see every day, rather than an artist who habitually makes all of his characters look similar.

Crossover #1 has some fantastic coloring from Dee Cunniffe. There is an enjoyable variety of colors used and many bright colors that liven up the page. Cunniffe also does some interesting coloring in the issue when a particular panel needs emphasis. Cunniffe gives everything in the panel a blue tint as if to say that time has stopped in the panel to provide us with enough time to comprehend the situation. The technique has a similar effect to when a film uses slow motion. It is odd to see this in a comic book since each panel already acts as a frozen image in time, but through Cunnife’s coloring, the technique works wonderfully.

The lettering of John J. Hill does not do much to surprise the reader for most of the issue, but when it comes more into play, Hill’s talents become apparent. Crossover #1 has an unknown narrator. The captions used for his are bland, with a common font and a tan background. This is understandable, as you want the narrator’s world to blend in with each panel and seem as it was just a part of the world. However, besides this and ordinary speech bubbles, there isn’t any lettering to comment on for much of the issue. While these two lettering choices do serve important roles, they are by no means impressive. Towards the end of the issue, everything changes, and the lettering becomes much more exciting as the story quickens the pace. Hill uses bold captions, giant fonts, and everything else a reader hopes to see in lettering. I hope it continues for the rest of the series.

Crossover #1 is an issue that you will not want to miss. It wonderfully sets the stage for a riveting new story and has brilliant artists on the project to make each issue a visual spectacle. If you have doubts about this new series, pick up a copy of this marvelous first issue, and it should change your mind.

A gripping introduction to a new world, full of breath-taking art.Review: CROSSOVER #1 - A Must-Read New Series