For groups formed by shared passion for entertainment, fandoms can get pretty damn angry, huh? As fandoms have gotten bigger and bigger, outbursts of rage and frustration have only become more common. In Rogues’ Gallery #1 by writer Hannah Rose May, artist Justin Mason, colorist Triona Farrell, and letterer Hassan Otsmane-Elhaou, that rage spills offline into full-on physical violence. And actress Maisie Wade might have to become more like her onscreen counterpart to survive the night.

Maisie Wade has had enough. The actress has been playing fictional hero Red Rogue on TV for ten years, but after a contract dispute, finally decides to leave the part. The news is met with mixed reaction by a group of hardcore fans. Said fans are loudly frustrated with the direction the show has gone, often blaming Maisie as a primadonna actress who’s twisted the show to meet her vision. But the second she leaves the show, they pivot to blaming her for dooming it to cancellation. One member of the group, a young man named Kyle, had been using the show as a way to bond with a neglectful father. While he was initially wary of the group’s increasing talk of violence against the actress, an outburst from his dad pushes him to move the group into action. Their plan? To steal an original copy of the comic Red Rogue Down from the actress’ house. All so they can give it back to the “real fans.”

This first issue only features Maisie Wade in snippets taken from her TV show, or in quotes from the press. She stays somewhat mysterious, while the angry fans driven to violence take center stage. Many, many of their complaints will sound familiar to people who’ve spent any time in fan spaces. But to keep the group from just being a collection of angry talking points, Kyle gets the most focus to show how a lonely, isolated kid can get sucked into a group of angry fans. It’s a difficult tightrope to walk, both trying to ground Kyle as a more realistic kid in a shitty situation and having him instigate a violent raid of an actress’ house in an over-the-top parody of fan culture’s worst instincts.

Not to say that that obsessed fans turning to violence itself feels unbelievable. More that an actress forced to dress as the hero she plays, defending herself from fans dressed as villains, is a premise more grounded in metaphor than reality. It’s a metaphor focused on Maisie’s point-of-view, which makes it a surprising choice to start from the perspective of the fans. Part of it is probably to keep the book from feeling completely one-sided, especially in how the narrative uses Kyle. Which works. The choice of viewpoint gets the most out of authentic-feeling conversations between angry fans and a sympathetic eye towards Kyle’s escape into fiction. It’s in setting up the why, justifying why the kids would raid a house in full cosplay and delving into their plans, that it feels weakest. It’s a premise that feels immediately, emotionally true, and focusing on a more literal setup robs it of some of its power. The final page, however, promises more focus on Maisie. Which should help the premise really sing. 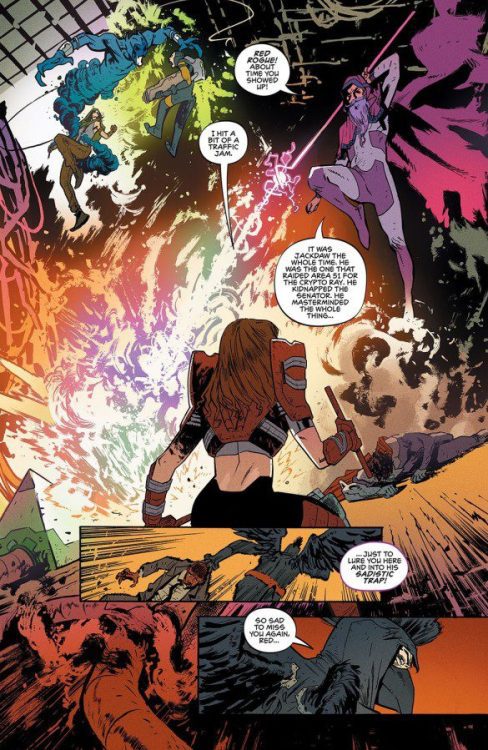 Justin Mason’s art helps bring out the grimy soul of the story being told, focusing on filthy environments, littered with empty cans and mysterious stains. Lots of angry gesturing and yelling pops up throughout, though the stand-out panel focuses on Kyle’s shadowed face, a slight smile showing through as he declares the need to teach Maisie wade a lesson. While this initial issue is more focused on conversation and scheming than high-octane action, a short sequence depicting the Red Rogue show demonstrates Mason’s considerable skill at drawing frantic fights. Backgrounds blur and blood arcs through the air.

Colorist Triona Farrell keeps with the grimy tone by focusing on dull greens, browns, and greys. That especially goes for Kyle’s room, completely dominated by shades of brown and rust-red. But the early sequence within the world of the show goes for a more psychedelic approach, with glowing green walls and explosions melting into rainbow prisms. It makes for great contrast, and how much this approach will return as Maisie begins to live out the life of her superhero character is yet to be seen. 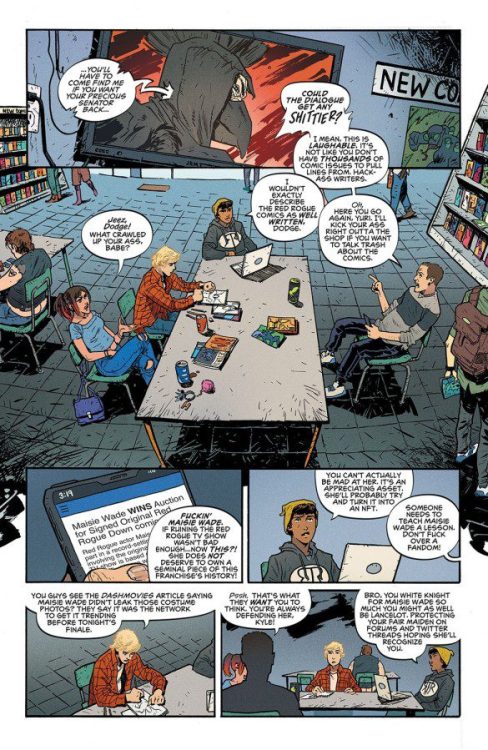 It’s also in that initial sequence that Hassan Otsmane-Elhaou has the most fun with his lettering, each declaration of a fictional superhero name having its own fake logo, much the way more branding-focused cape comics used to (and still) do. Red Rogue is drawn in red bubble letters, while Worldguard is in a thinner, more florid font. There are other fun details throughout, like how quieter dialogue will be given a thinner, mixed-case font to contrast the classic all-caps style. Or how yelling is rendered in wavering, unstable lettering.

Despite a setup with a few stumbles, Rogues’ Gallery #1 is a promising start that looks to draw more from its premise as the series continues forward. It’s available now from comic shops near you, and well worth a look.

Bunch of angry fans, a publicly-listed address, and a whole lot of free time. What's the worst that could happen?Review: Cosplay Heist in ROGUES' GALLERY #1