Image Comics brings Michel Fiffe’s excellent indie superhero comic Copra under its banner with a debut issue that is a treat for longtime fans and an excellent jumping in point for new ones.

From Image- COPRA returns in the first issue of its all-new ONGOING SERIES! Acclaimed comics auteur MICHEL FIFFE picks up where his band of mercenary misfits left off, reintroducing the entire cast of his Suicide Squad-esque revenge machine in a brutal standoff against their own leader. Jump right into the thick of it with the world’s greatest action team in this extra-length debut milestone. 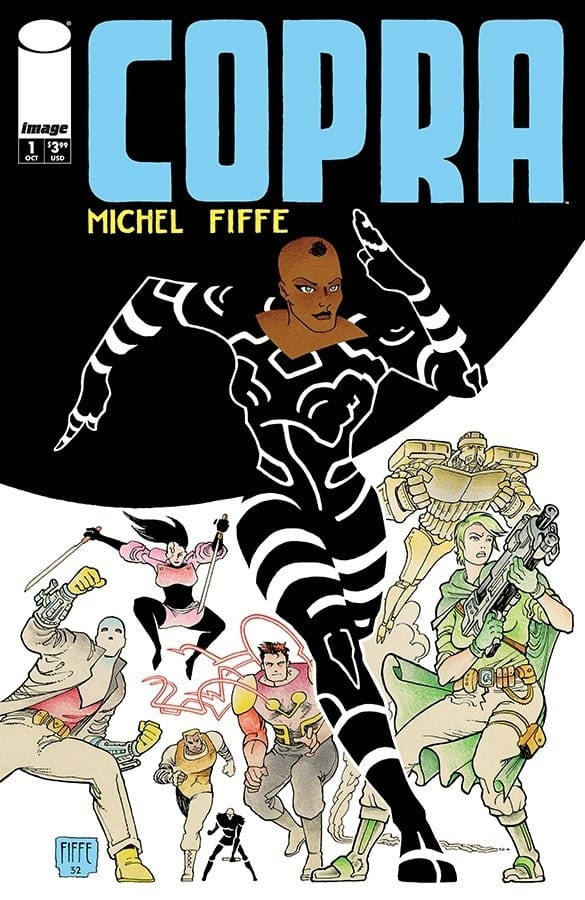 Copra #1 opens with a few quiet and catch up pages. Fiffe drops us in on his Suicide Squad analog as they take a moment to rest after their last mission (Copra: Round Five). Using roll call techniques and just a little bit of exposition, Fiffe quickly gives new readers all they need to know (who the team is and why they are in Miami) before the shit hits the fan and we get a full-on classic Copra action scene. And what an action scene it is. We get robots, guns, super-powered fistfights and martial arts moments. Fiffe excels at writing and drawing a kinetic scene. Flipping through the pages is exciting, and the images feel like they are moving and popping off the page.

His understanding of the comics medium is obvious. He pulls influences from all sorts of places: manga, indie comix, Steve Ditko, 80s outlaw comics, 90s Image and much much more. One of the best aspects of reading and looking at issues of Copra is figuring out where the comic book influences come from and how Fiffe tweaks them and pushes them to make them unique, bizarre and totally his own. His art also feels HAND-DRAWN and so immediate you feel like Fiffe is drawing right in front of you. Copra is the best kind of homage; filled with love, knowledge of the medium and originality. It’s a fucking pure pleasure to read if you are a comics fan.

The story itself may be a take on Suicide Squad, but the weirdo backstories and strange characters give it a very offbeat tone that at times adds some surrealism to the story and makes the characters such outsiders that you can’t help but fall in line and root for them.

If you really dig comics, then Copra is a must buy. Grab this issue, buy the previous collections and jump right in. Fiffe is one of our best current comics artists/cartoonists and this is the kind of thing only this medium we all love can pull off.

You can pick up Copra and any and all comics at your local comic shop.

'Copra' is a fantastic comic book; filled with love, knowledge of the medium and originality. It's a pure pleasure to read if you are a comics fan.Review: COPRA #1 Brings Michel Fiffe's Cult Comic To Image And It's Great