Review: COMMANDERS IN CRISIS #1 – A Series With A Lot Of Promise

On October 14, Image Comics releases Commanders in Crisis #1 from superstar writer Steve Orlando and artist Davide Tinto. They are joined by colorist Francesca Carotenuto and letterer Fabio Amelia in a story that stretches from the streets of Philadelphia to the halls of power in D.C. to the very fabric of reality itself!

Orlando has given himself a gargantuan sized task in his first issue. He has to create brand new characters, make readers care about the characters, and establish the cosmology of the world. Commanders in Crisis #1 is pretty ambitious and plays off of past Crisis-tropes from DC Comics in a way that would read like parody if it wasn’t for the fact that Orlando and company seem to be using it to craft a relevant social message for our time. A message of hope, empathy, and the consequences of our present actions on the future.

While this first issue is a little heavy in exposition, which makes the dialogue a bit clunky at times, Orlando establishes the characters, his or her motivations, as well as their backgrounds, laying a clear groundwork for the series. If future issues can avoid being overly exposition-heavy, this has the potential to become a very solid series.

Another danger this series may face is being a bit “on the nose” with its moral and political messaging. If it can be nuanced without being preachy, this could be a very profound series.

Co-creator Davide’s artistic powers are on display in this issue. Davide can capture the bombastic action in this issue, and there is a fair share of furious action. He is able to capture the movement and motions of the characters well in a very busy issue.

Davide also portrays the emotions of the characters well. Readers meet a lot of new characters in this issue, and it would be very easy for an artist to phone it in when it comes to the facial expressions of multiple characters, but Davide spares no details and draws characters whose faces exude personality.

Davide and Orlando have created characters with unique power sets, and Davide highlights his skills by drawing some very abstract sounding powers. He is, of course, joined in this endeavor by Carotenuto, whose colors assist in portraying the various characters’ abilities.

Carotenuto’s colors are bright and almost shiny in certain places, adding some shading and shadows that make this a lovely book to read.

Amelia’s letters are quite serviceable in this issue. The sound effects and intros for the characters are nicely stylized, particularly one character’s dialogue, which is uniquely colored when she uses her power. The dialogue is also easy to follow. As noted earlier, there is a lot of expositional dialogue in this issue, but Amelia’s letters never make any of the pages look overcrowded.

Fans of DC Comics crisis events should love Commanders in Crisis #1. It is a pastiche of DC’s crisis stories, which takes those concepts in some potentially unique directions. Morrison fans especially should love what Orlando, Davide, and company are doing in this issue. This story touches on the importance of hope, empathy, and the consequences of allowing those things to disappear from public discourse. I’ll definitely be checking out issue #2! 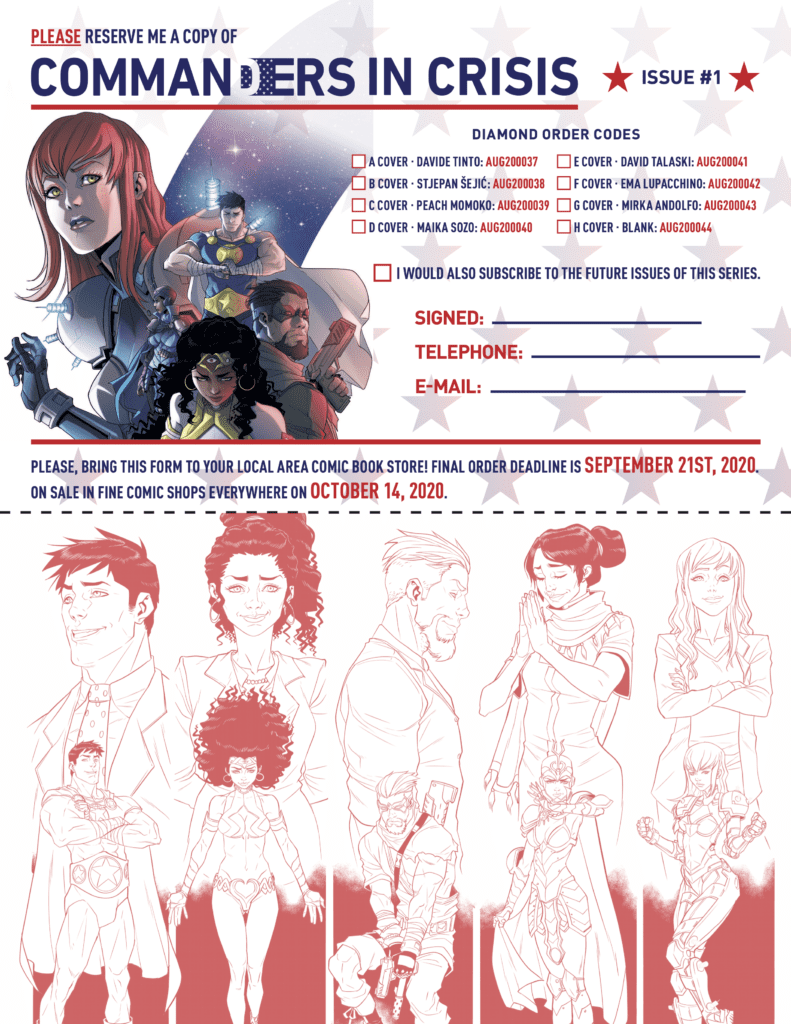 Commanders in Crisis #1 is a beautiful pastiche of DC Comics crisis events with a timely message for the current social climate.Review: COMMANDERS IN CRISIS #1 - A Series With A Lot Of Promise