Review: Clark Is Branded A Political Opportunist In SUPERMAN #20

Clark Kent’s life as a reporter/superhero has become more intertwined than ever since revealing his identity to the public. Within the pages of SUPERMAN #20, available in comic book stores on Wednesday, February 12th, readers get a look into how the world of mass media perceives this combined identity. Unfortunately, some are reluctant to give Superman the benefit of the doubt. A particularly cynical reporter at the Daily Star claims it’s unfair to leverage his status as a hero in his reporting work, despite his fellow employees’ insistence of the contrary. But when it’s revealed Superman recently claimed the title of Earth’s Representative in the United Planets, media professionals everywhere want answers.

The reporters at the Daily Star are spending their time adapting to the new status quo of reporting in Metropolis, one in which Clark breaks stories as a star reporter and as Superman. A few people are uncomfortable with him straddling these roles, but for the most part the reporters realize that he spends just as much time saving the world as he does reporting. We even hear a personal story from one woman which recounts a time the hero save her and refused to break the story so other media outlets would have the chance to on their own.

But while this discussion is taking place, Superman attempts to keep the peace on a distance planet. Mongul has attacked the United Planets peace meeting, and the Man of Steel is doing all he can to keep the peace lest war breaks out in the cosmos. 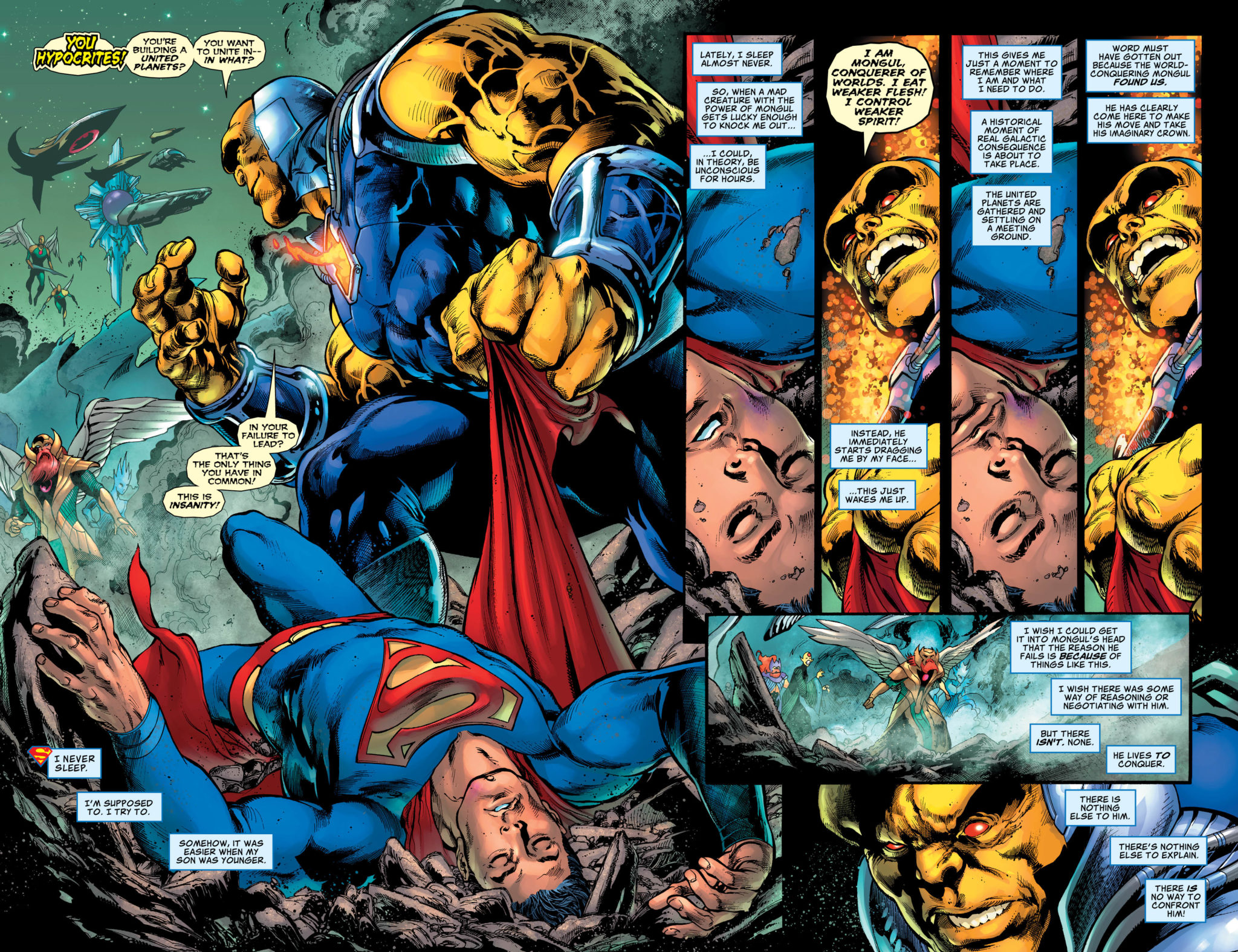 Despite Clark’s fight for peace, a number of accusations from the Star fly his way after video footage is released of his diplomatic activities on behalf of Earth. The reporters believe this to be a prime example of Clark using his dual status as hero and reporter to garner political clout. Ultimately, they question why he deemed himself the ambassador for Earth despite not being elected to the position.

Writer Brian Michael Bendis does a wonderful job of positing unexpected troubles in the life of Clark after revealing his identify. We would naturally expect every villain in the galaxy to attack his loved ones, but Bendis surprises us by showing the political ramifications instead.

The artwork in this issue to top-notch, presenting readers highly detailed panels of both the scenes in the newsroom and at the United Planets gathering. Ivan Reis, Joe Prado, and Oclair Albert’s penciling and ink work, combined with Alex Sinclair and Jeremiah Skipper’s coloring and Dave Sharpe’s lettering, present a seamless story that shows both the epic battle with Mongul and the chaos in the Star’s newsroom. We see the team is equally able to depict the average news office just as well as an alien planet with multiple alien beings.

Reis, Prado, and Sinclair’s main cover features Clark in the clutches of Mongul, who’s the catalyst for the destruction of the United Planets peace talk.

Brian Hitch and Sinclair’s variant cover gives readers a god-like depiction of Clark, showing how many of those in the newsroom, and society as a whole, now see the once clumsy reporter.

SUPERMAN #20 throws in an interesting new wrench in Clark’s life. Despite the lack of hurtles facing him after the initial identity reveal, it seems our hero failed to consider the politics of the whole ordeal.

Do you think the public as a whole will turn against Superman? Let us know in the comments below!

Review: Clark Is Branded A Political Opportunist In SUPERMAN #20Writer Brian Michael Bendis does a wonderful job of positing unexpected troubles in the life of Clark Kent after revealing his identity.