Steve Rogers has undergone many shifting circumstances throughout the past few issues, and they don’t seem to be decreasing. After being framed for the murder of General Thunderbolt Ross by Wolfgang von Strucker, the hero turned himself in to prevent collateral damage, only to be sprung from prison by none other than Sharon Carter and the Daughters of Liberty. Together, this epic team is on a mission to clear Steve’s name by taking on corrupt organizations. They plan to start with the Watchdogs, an extremist group hell-bent on enforcing their sense of “tradition” upon society’s most vulnerable.

Readers will be able to join Steve and the Daughters for the fight when CAPTAIN AMERICA #14 hits stores on Wednesday, September 25th.

Steve and the Daughters haven’t worked together long, but they’re already proving to be a formidable, seamless team. The story initially features Echo, an experienced fighter herself, showcase equally amazing abilities to infiltrate the Watchdogs base bar. She pretends to cozy with one of the most unsuspecting meatheads, then proceeds to take out the criminals one by one as Steve runs the team’s strategic operations. 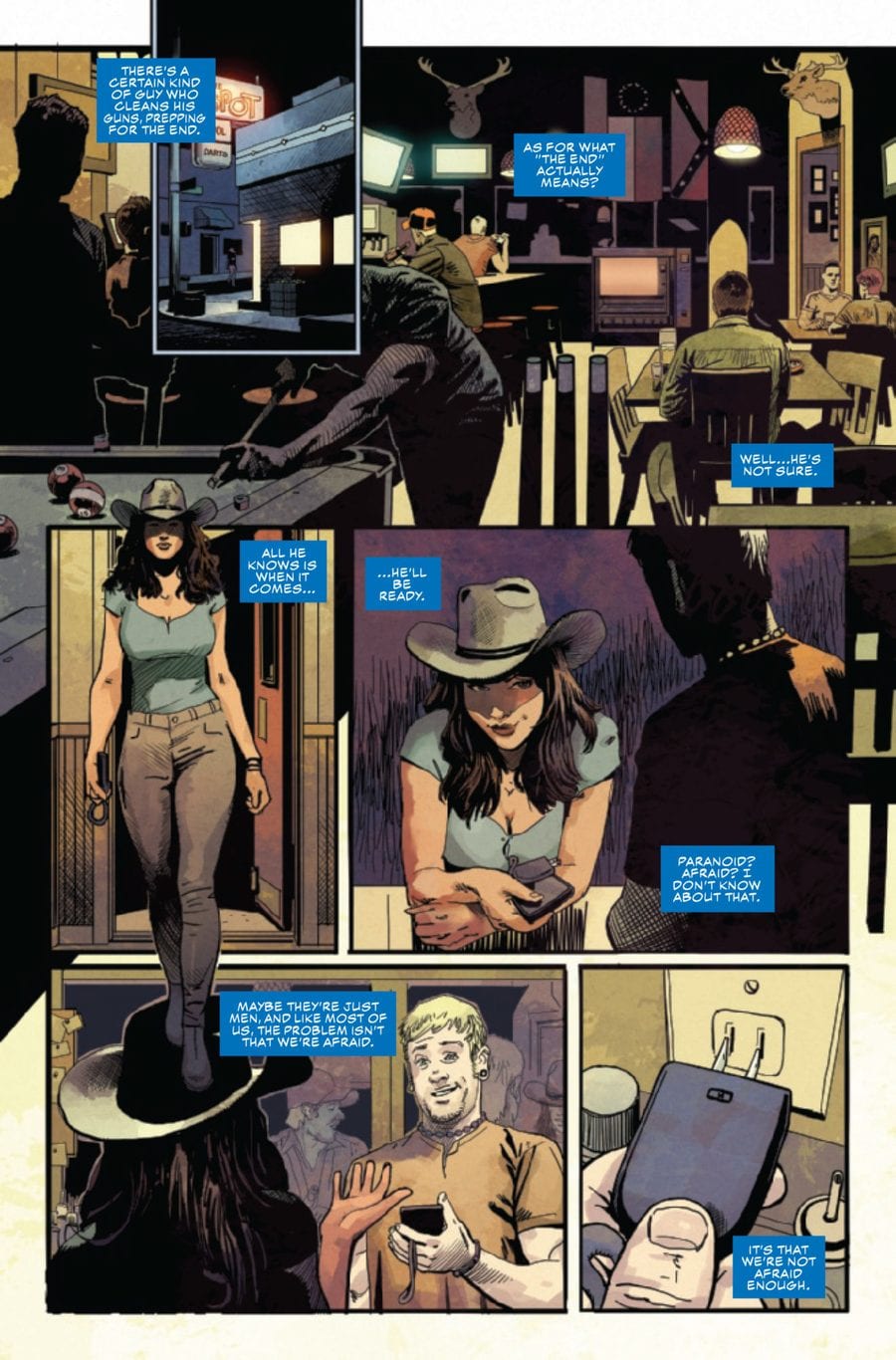 Steve eventually joins the fray and leads the team through the compound in search of their leaders. Here readers are treated to plenty of splendid action as Steve, White Tiger, and Echo take on the Watchdogs. The ease with which this team of heroes takes down such hate-filled villains is satisfying, but hearts stop when they uncover the true purpose of the organization. It’s a secret that hides beneath the organization’s dedication to keeping their traditions in place, no matter how many people they hurt in the process.

In this issue writer Ta-Nehisi Coates offers a brilliant critique of traditionalism, an all too common trait found among many in our country today. This ideology, rather than opening up the mind to new possibilities, encourages us to cling to the ways things have always been done—with force if necessary. In response, Coates presents Steve as the ideal for each and every American, simultaneously acknowledging one’s potential fear of change while embracing the beauty it can bring.

The artwork within this issue brings to mind the classic adventures crafted by Jack Kirby himself. Each element helps to craft this action-packed story—from Matt Milla’s multilayered  coloring in the fast-paced scene transitions to Niko Walter’s fleshed out fighting poses of Steve and the Daughters. In addition, letterer Joe Caramagna’s dynamic changes in fonts helps readers gauge the character’s emotions, matching each piece of dialogue with the scene’s level of intensity.

Alex Ross’ main cover artwork features Steve fighting off a team of soldiers superimposed over a larger version of his. The background image depicts the hero in his traditional garb, which serves as a metaphor for Steve’s reflection of his previous status as a beloved hero.

Patch Zircher and Jason Keith’s unique variant cover features a warping of Steve, first showing him in civilian clothes and then shifting to the Captain America suit. However, we see a third Steve—the one caught in between these identities. This places our focus on Steve’s struggle to define himself after his defamation at the hands of Hydra Cap and the Power Elite.

CAPTAIN AMERICA #14 offers us an exciting look at Steve in his best element: fighting social evils. It’s great to see him kicking butt with the powerhouse that is the Daughters, too.

Are you enjoying Steve’s collaboration with the Daughters? Let us know in the comments below!

Review: Steve Takes On Traditionalism In CAPTAIN AMERICA #14Writer Ta-Nehisi Coates offers a brilliant critique of traditionalism an all too common trait found among many in our country today.