Review: BOOKS OF MAGIC #5 Shows The Beauty Of Perspective

BOOKS OF MAGIC #5 takes readers into the fantastical world of The Dreaming as Timothy Hunter explores the realms of magic. He’s still learning how to balance his mystical side with the “normal” aspects of teenage life, but The Dreaming realm might help explain everything that’s been happening. Fortunately for Timothy, the answers he seeks might be closer than they appear; it’s all a matter of perspective. 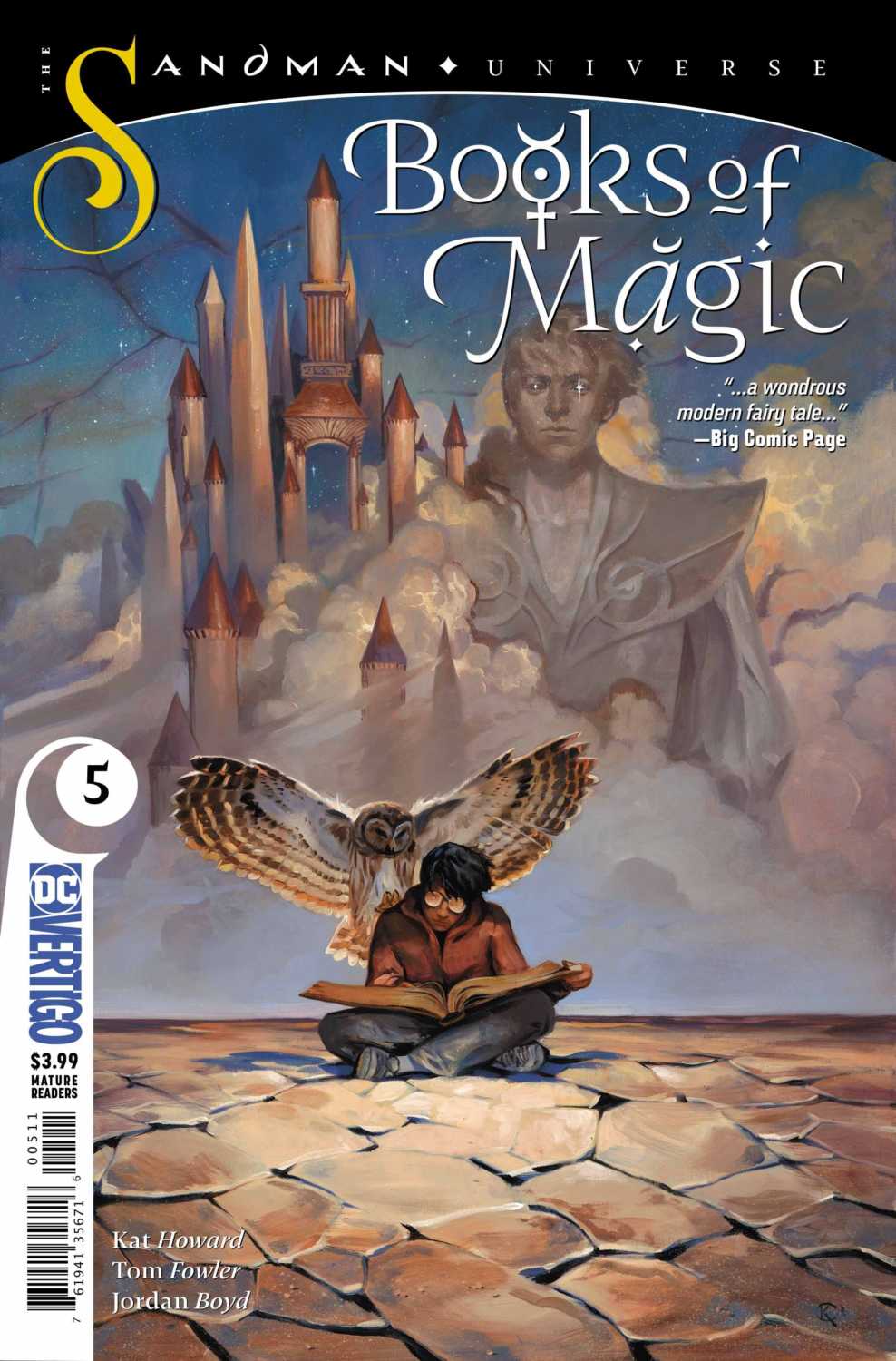 Timothy’s search for answers leads him and his owl companion to the dazzlingly bizarre world that is The Dreaming. This realm is made up of dreams and contains vastly distorted versions creations reminiscent of Earth. It’s enough to overwhelm the unassuming boy. He frantically looks for anything that seems familiar, eventually finding a library. 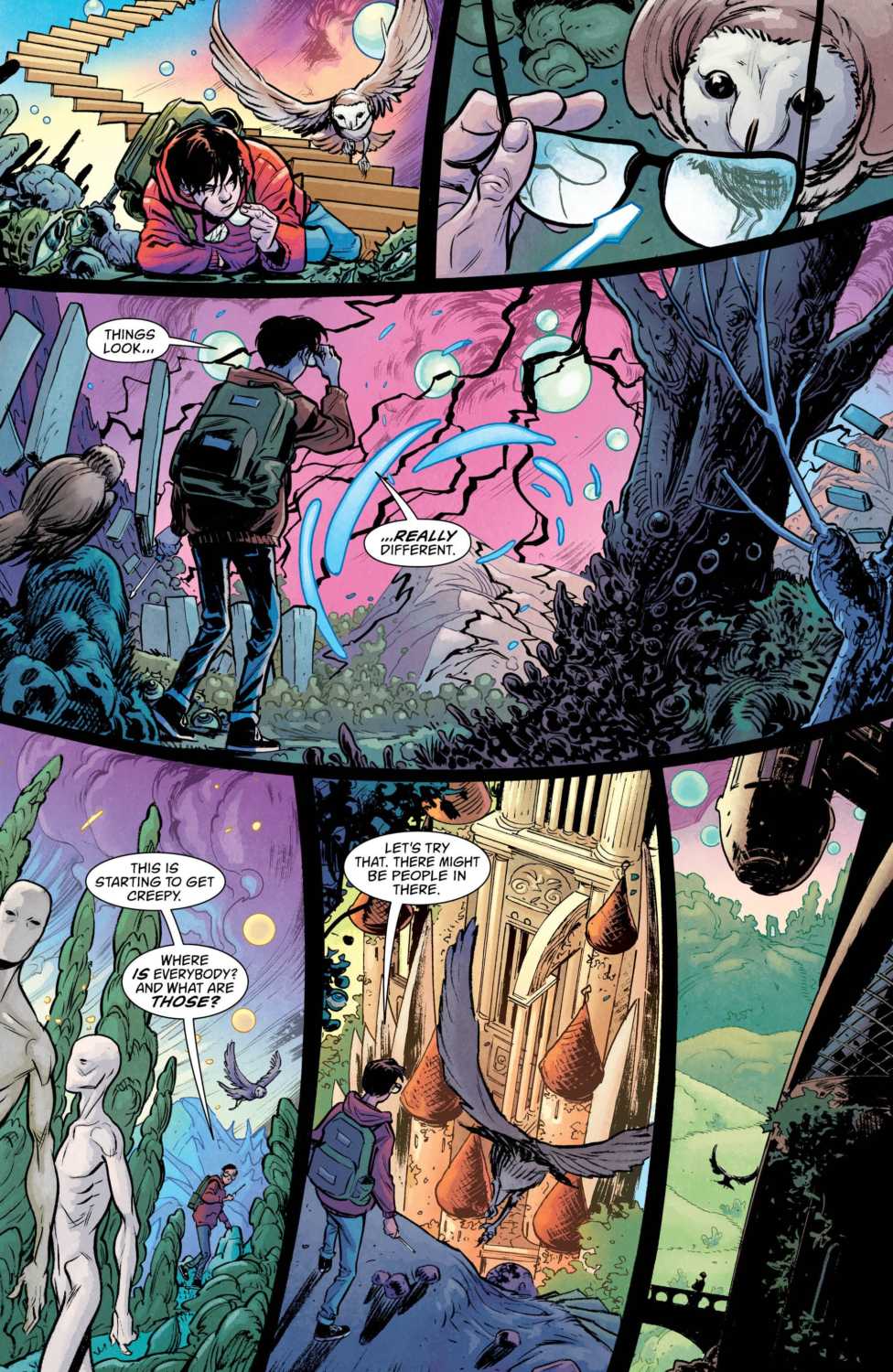 This issue is all about changing one’s perception of reality. We see a perfect example of it’s application when Timothy speaks with woman named Eve who’s taking care of a library in The Dreaming. When asked if the books housed inside are real or true, Eve responds with a well-known story while placing emphasis on a detail often ignored. Timothy claims the detail changes the whole story, but Eve offers another perspective: “The story is the same. The truth of it is the same. It is only that you see it differently now.” 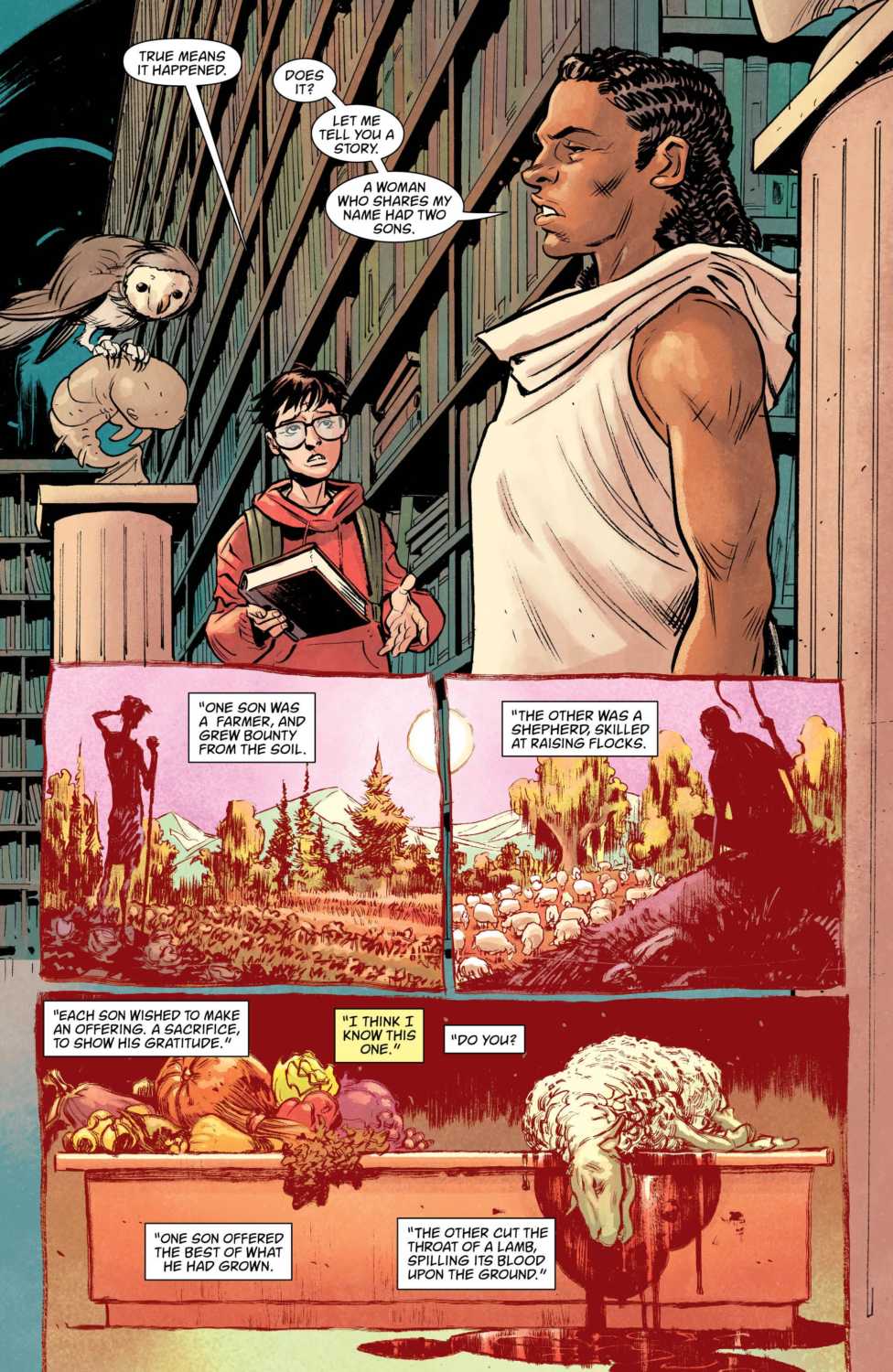 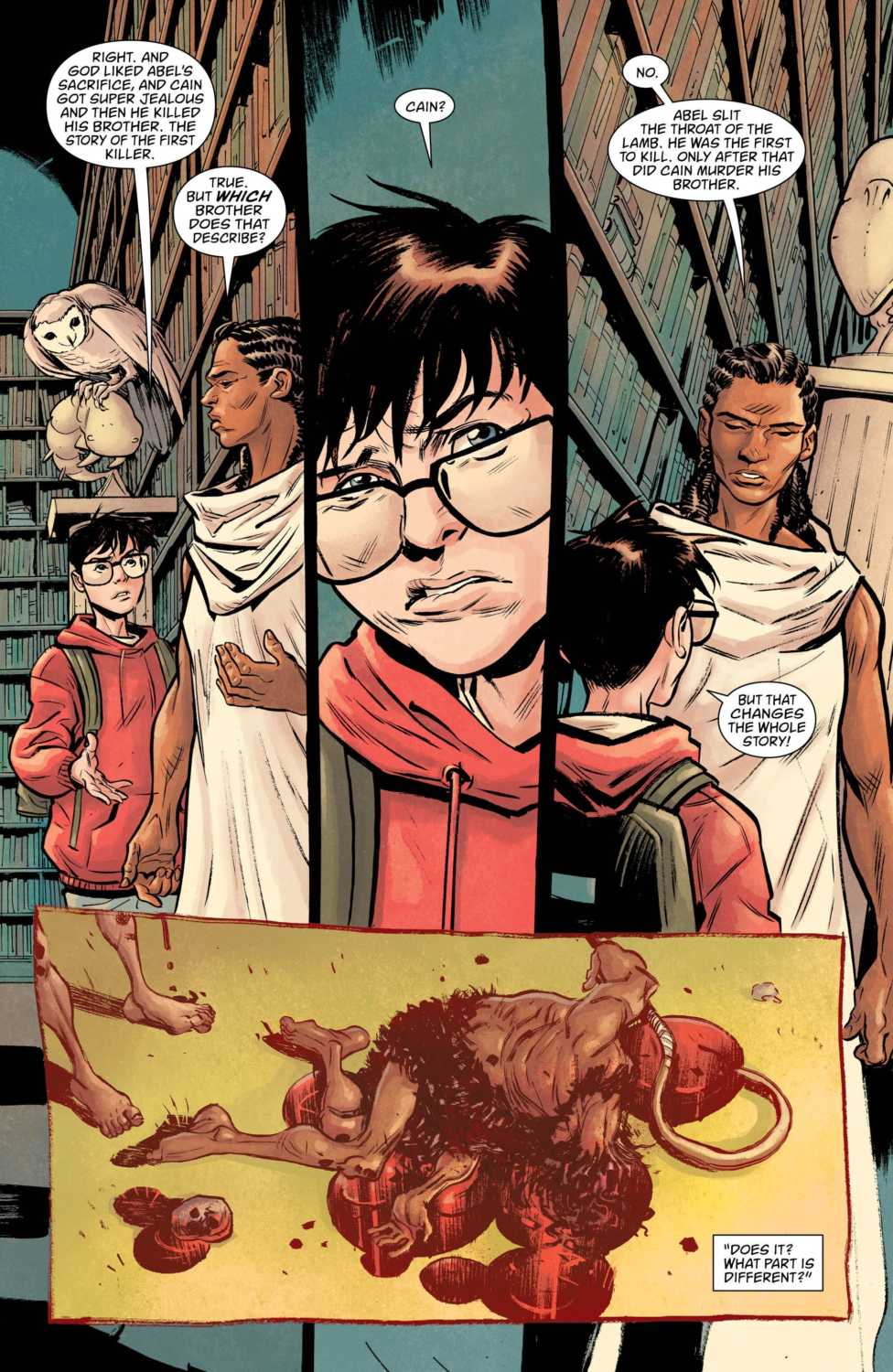 Kat Howard’s story furthers Timothy’s adventure through self-discovery and philosophical insight. This is the rare type of tale that invites you to think about the nature of reality while enjoying its wonderment.

This series couldn’t have chosen more fitting illustrators than the likes of Tom Fowler, Jordan Boyd, Todd Klein and Kai Carpenter. Carpenter’s cover art uses pastel colors to blend the elements together, which helps combine the normalcy of Timothy’s act of reading with the wider magical world looming behind him.

Fowler, Boyd and Klein’s inner art tells a different story; Fowler outlines each figure with dark, bold lines that highlight their many differences, which adds to the realm’s appearance of chaos. Boyd’s vibrant and multi-faceted colors adds a complexity that balances out the chaos. And Klein’s lettering is strategically placed in the panels to avoid distraction while remaining informative and emphasizing each character’s variances in speech. 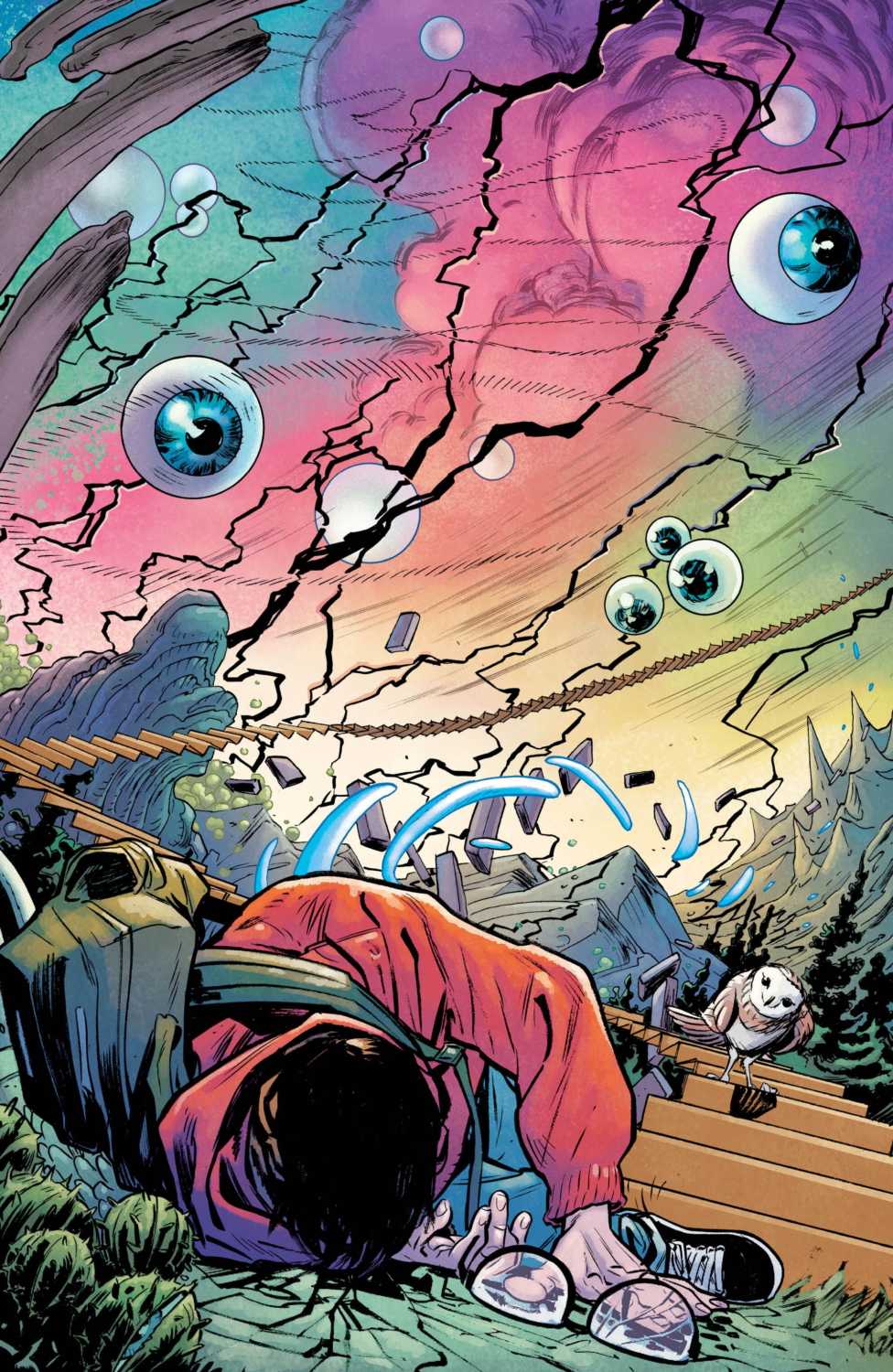 When combined in this issue, Fowler and Carpenter’s artwork reinforces the story’s theme of seeing things from multiple perspectives.

Are you liking Howard’s retelling of the BOOKS OF MAGIC storyline? Let us know in the comments below!

A philosophical reflection on the nature of truth, told through the experiences of a curious young wizard.Review: BOOKS OF MAGIC #5 Shows The Beauty Of Perspective