Review: BOOKS OF MAGIC #12 And Timothy’s Descent Into Misery

Timothy Hunter made a vow to never use magic again last issue, for the sole purpose of protecting his mother from the cult group The Cold Flame. But his mother’s odd behavior may call this decision into question. On top of that, Dr. Rose is caught in the middle of a deadly fight with the treacherous Mr. Davies, right in the middle of Tim’s school.

Find out what becomes of Tim and Rose when BOOKS OF MAGIC #12 hits stores on Wednesday, September 25.

Tim’s mother has been behaving strangely since returning home last issue, obsessively begging him to show her the Books of Magic. What’s more, she admits to casting a spell on her husband so there would be no intrusions. After spending time with her, Tim realizes this woman isn’t his mother after all; it’s a member of The Cold Flame. 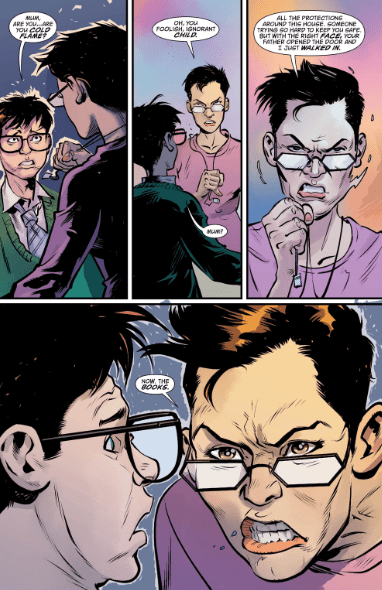 Shocked in utter disbelief, Tim uses an impressive force of magic to force the evildoer out of his house. But the there’s no time for rest, as his bully Tyler arrives almost immediately, alerting him to a dangerous magical battle taking place at the school. Feeling some sense of responsibility, and wanting to get away from his mother’s impostor, the young wizard races to the school intending to use his full magical power once again. But upon arrival, Tim learns that  Tyler’s request was all part of the evil Mr. Davies’ ploy to corner the young wizard in a trap, leaving Tim uncertain if he can trust anyone anymore.

Kat Howard has been slowly revealing Tim’s descent into misery throughout this series, and his actions taken in BOOKS OF MAGIC #12 is the culmination of that work. He’s lost almost every form of support in his life, and it’s clear the boy is ready to take out his hurt on the world. Unfortunately for Davies, Tim’s decided the treacherous teacher is the most suitable punching bag, satisfying that all-too-common teenage angst most readers have experienced.

The artwork in this issue beautifully suits its high-paced, action-packed story. Tom Fowler’s pencils, emboldened by Brian Churilla, Craig Taillefer, and Fowler’s inks, captures the brilliance of the magical fights within this issue. From the shambles of Mr. Davies’ office to the shattered glass in Tim’s bedroom, the ability of this art to draw readers into the action is astounding.

Marissa Louise’s colors respond well to each scene, shifting to intense purples and yellows during both fights, while sticking to more subdued colors in the transition scenes. Todd Klein’s letters work in a similar fashion by using more dynamic, large fonts in the more active scenes.

Kai Carpenter’s main cover depicts Tim attacking a person (presumed to be Mr. Davies) with his screwdriver wand. The anger in our protagonist’s face is consuming his entire fighting stance, showing the high level of hatred he has for the teacher.

The action-packed BOOKS OF MAGIC #12 is just the issue to take this series to a new level of intensity. Despite his troubles, Tim’s magical ability has improved dramatically, and he’s ready to unleash it upon the world.

What did you think of Tim’s actions in this book? Let us know in the comments below!

Review: BOOKS OF MAGIC #12 And Timothy's Descent Into MiseryKat Howard has been slowly revealing Tim's descent into harsher behavior throughout this series, and his actions taken in BOOKS OF MAGIC #12 is the culmination of that work.