Review: Timothy Faces His Friends And Family In BOOKS OF MAGIC #10

BOOKS OF MAGIC #9 took readers on a wild adventure into a book prison which housed Ellie, the classmate and best friend of Timothy Hunter. Fortunately the determined young woman managed to escape and find a way back home. Timothy, upon hearing the news, rushes to meet with her in the hopes of reigniting their relationship after having been gone for so long; the same goes for his father, who the wizard hasn’t seen in weeks. But the young man will soon learn that the magic in his life comes at a high cost, especially for his friends and family. 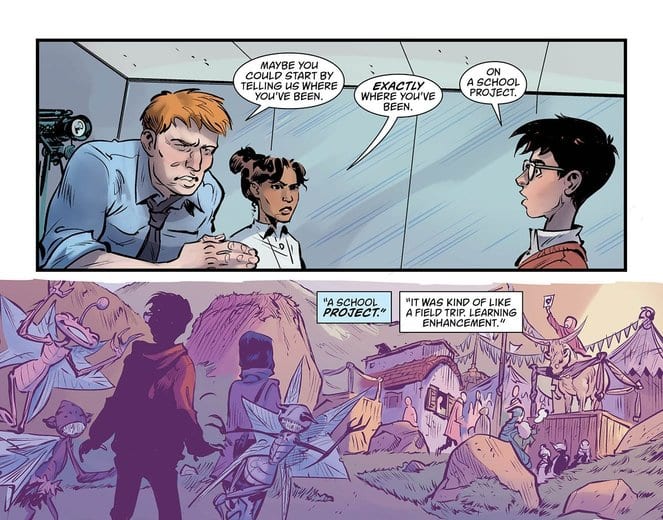 BOOKS OF MAGIC #10 takes readers back into the mind of Timothy as he wrestles with new problems in the “real” world. One would hope his troubles would die down after escaping the magical lands wanting to entrap him, but this individual isn’t so lucky. Upon returning to London, Timothy searches for his father, only to find the anxiety-reducing spell has left him in an almost catatonic state. 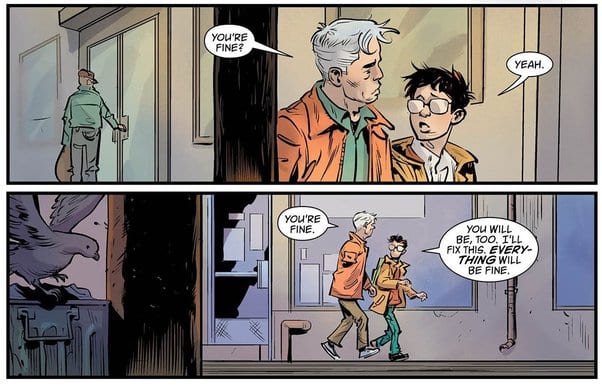 Hoping to seek reassurance in Ellie, Timothy makes his way to her house. But the traumatized girl has little to say to him as she relays her fear of Mr. Davies, the evil teacher who cast her into the book prison. Timothy reassures her that he’ll be able to stop Davies with magic and proceeds to demonstrate his ability to control pieces of chalk on the ground. Unfortunately, this ignites the fearful memories of Ellie’s imprisonment and causes her to abandon the well-meaning Timothy.

These devastating reactions from his friends and family upon returning to London leave Timothy in a depressed state. It’s clear magic won’t solve all his problems; in this case it appears to make things worse. Readers will grapple with Tim’s desperate attempts to reconnect with the family and friends he’s been forced to abandon for some time.

Tom Fowler’s pencils, Brian Churilla’s inks, Marissa Louise’s colors, and Todd Klein’s lettering work in harmony throughout BOOKS OF MAGIC #10. It may seem difficult to transition the story’s setting back to the non-magical world of London, but the creative does a great job of entrancing readers all the same. The bold outlines framing the London streets, the variety of colors in Timothy’s chalk demonstration, and placement of dialogue boxes give readers the impression of a classic fantasy storybook all the same. It shows us there’s still magic involved in Tim’s life despite his less than ideal circumstances.

Kai Carpenter’s cover artwork gives us those fantasy vibes from childhood. He continues the series’ trend of illustrating the cover to look like a storybook while adding a detailed map of the magical lands Timothy traverses.

BOOKS OF MAGIC #10 brings readers back to reality as Timothy seeks to rectify the damage his magic has wrecked upon his life. It’ll be interesting to see how he will continue the wizard training in such circumstances.

What did you think of Timothy and Ellie’s reunion? Let us know in the comments below!

Review: Timothy Faces His Friends And Family In BOOKS OF MAGIC #10A detailed look at the consequences magic bestows upon Timothy "normal" life in London. Readers can relate to his desparate attempts to balance his destiny with the relationships in his life.