There are two schools of thought that surround SpikeTV’s cult-favorite yet short lived TV show, Blue Mountain State. One is that the show is a wonderful parade of breasts, beer, and football, much in the vein of the American Pie franchise. The other view sees the show as a parody of such works – taking the misogyny and ridiculousness of college football culture to such extremes that you can’t possibly take it seriously. It was members of both parties that made the show so beloved in its time. And while its possible the former of the viewpoints may find Rise of Thadland enjoyable, the latter will likely walk out before the attraction opens its doors.

To put it simply, Blue Mountain State: The Rise of Thadland is a bad movie. It picks up a year after the show, where senior Alex Moran (Darin Brooks) is trying to save the beloved Goat House, the football team’s home for drugs, alcohol, and women. In order to buy it out from the outside bidders, the team calls upon former member Thad Castle (Alan Ritchson), who has enough money from his pro-football contract to buy out the house. Thad agrees to do so, under one condition: the team must make his childhood dream of a drug-infused amusement park come true – Thadland. If they build it, he will come. What follows is the gang partying in an amusement park, huffing balloons filled with poop vapors, and one character – co-creator Chris “Romanski” Romano – having sex with a goat. Yes, there is a beastiality sex scene in this movie.

In case the promise of goat sex, poop fumes, and several shots of Romanski’s penis aren’t enough to turn you off to this film, let the shoddy plot and juvenile humor do so instead. While the show focused on the humor that stems from the team’s ridiculous situations, this film is light on any actual jokes. We get a couple one-off jokes about how girls are dumb, how Romanski has a gross penis, how the dean has a funny accent because foreigners are funny, but that’s about as far as the humor goes. The film is only a vehicle for the concept of an R-rated theme park where Ritchson can call Walt Disney an “unimaginative piece of shit!” Likewise, the plot of the actual film only fills about 90 minutes worth of time, as it takes only about 20 minutes for the team to introduce their new amusement park. Sure, the Goat House may be auctioned off, Alex wants a lesbian cheerleader to be his girlfriend, and Thad hasn’t been as great as he thought he’d be outside of college, but who cares about all that when you can see Thad slap breasts and snort cocaine out of the sky?

Even for fans of the franchise, there’s little pleasure from seeing the boys back in town, unless you were hoping for them to realize the error of their ways. Alex decides by the end that he’d rather not be a party boy, opting instead to be with a girl he’d once slept with way back in the show’s earlier seasons. Fans were hoping for a return of two former characters, Shilo and Radon, who both only spent a season on the show. And both do show up – for about 10 minutes total. Instead, we see a lot of new character Dickdawg (played by Youtuber Jimmy Tatro), who is successful at being a second Thad Castles and not much else. Even the team’s beloved coach is only on screen enough to have his arm broken in a motorcycle accident. If a film like this doesn’t focus on complete and total fan service, especially after being crowdfunded into existence, then what has it really accomplished? 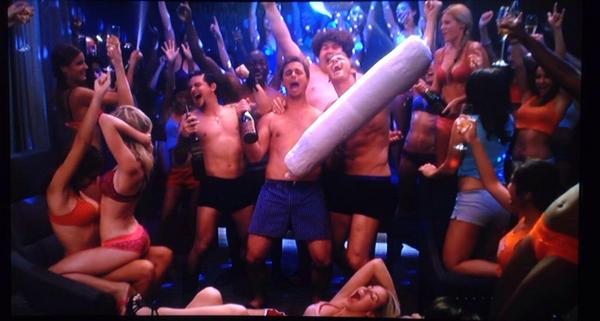 Now that’s not to say the film has absolutely zero positive qualities. We do see glimpses of real humor from Larry Summers (Omari Newton), the former Thad sidekick turned assistant coach. We also get an interesting twist of Donnie, one of the lead players, revealing that he’s gay, which Thad proclaims to the entire campus with excitement, going so far as to buy him “a guy.” There’s a brief moment where one of the “sloots,” Thad’s catchphrase term for women, notes how ridiculous and misogynistic the whole situation is.

That may be the crux of my issue with this film – it seems to be self-aware of its explicit and juvenile nature, but rather than have any real comedic insight into it, it rushed headlong into it. There’s no real humor or meaning behind Rise of Thadland except that the gang – both fictional and real-life cast members – wanted one last hurrah of horror. Alex’s ending revelation of letting the frat culture go to be with Mary Jo (Frankie Shaw) makes no sense within the context of the film – if it really was all about NOT embracing this horrible culture, then why is it only in the final few scenes that we get any indication of it? Blue Mountain State: The Rise of Thadland seems to want to be more than it possibly can be. It wants you to think it sees the error of its ways, but it’s preaching about sin while still in the thick of it. What use is self-awareness when you don’t do anything to change it?

The movie doesn’t do enough of anything to make it redeemable to someone who wants more than a party, but after watching three seasons and a movie based off similar madness, maybe that’s all the film should be. Anyone who’s hoping to watch The Rise of Thadland for a good movie is out of their mind. A viewer hoping for a delightful parody of football culture should only watch this as a means of comparison. Even fans of the raucously funny show shouldn’t expect to much from this movie. The people who are most likely to enjoy it are the ones who made the movie, who now have 90 minutes worth of proof that people liked that thing they made once. To the creators, it’s a victory lap that misses the point of what made it work at all.