Review: Blood is Thicker than Water in CARNAGE #1

Back in 1995, Carnage met the Joker during a crossover. While they initially hit it off, what caused them to turn on one another was Joker’s insistence that murder was an art. When he killed, it was out of a sense of theatricality, an attempt to make a point about the cosmic joke. Carnage… didn’t. He just kind of wanted to do it. 27 years later, Carnage’s symbiote has found itself without its trigger-happy host, courted by a serial killer with artistic ambitions. So the question, then, is whether the alien will want a partner with the soul of a killer poet. But for those who wanted Cletus, don’t worry – a backup story has him doing what he’s always done best.

As with, Carnage Forever, Carnage #1 (no subtitle) features three stories. A twenty page main story, a ten page backup story, and one page of newspaper-style gag strips. The main story is written by Ram V, following detective Jonathan Shayde as he pursues a serial killer who goes by the moniker “The Artist.” What quickly becomes clear is that the killer’s spree is all an attempt to court the Carnage symbiote, recently left without a human host. But the symbiote quickly reveals itself to have… different ambitions.

The original Carnage stories were written in a time where serial-killer investigation dramas were exploding in popularity, and the character always carried some of that with him. The many stories that try to go into Cletus’ mind have all opted for different serial killer clichés. Sometimes he’s begging for death, sometimes he’s a helpless child trying to exert control, and sometimes he’s simply a moral black hole, devoid of emotion. This first issue leans heavy on those influences by opening with a very classic Silence of the Lambs type set-up, a harried detective chasing an eccentric killer with a flashy theme, only for the symbiote to show up and admit it has little interest in what the killer has been doing. When the symbiote says it wants to find its own meaning rather than just doing what Cletus did, it’s rejecting the influences that have defined Carnage up to this point (give or take a few excursions into dark god worship). What does it want, then? The issue doesn’t answer that yet. It’s more a table-setting exercise for a new direction, starting by setting itself against what’s come before. 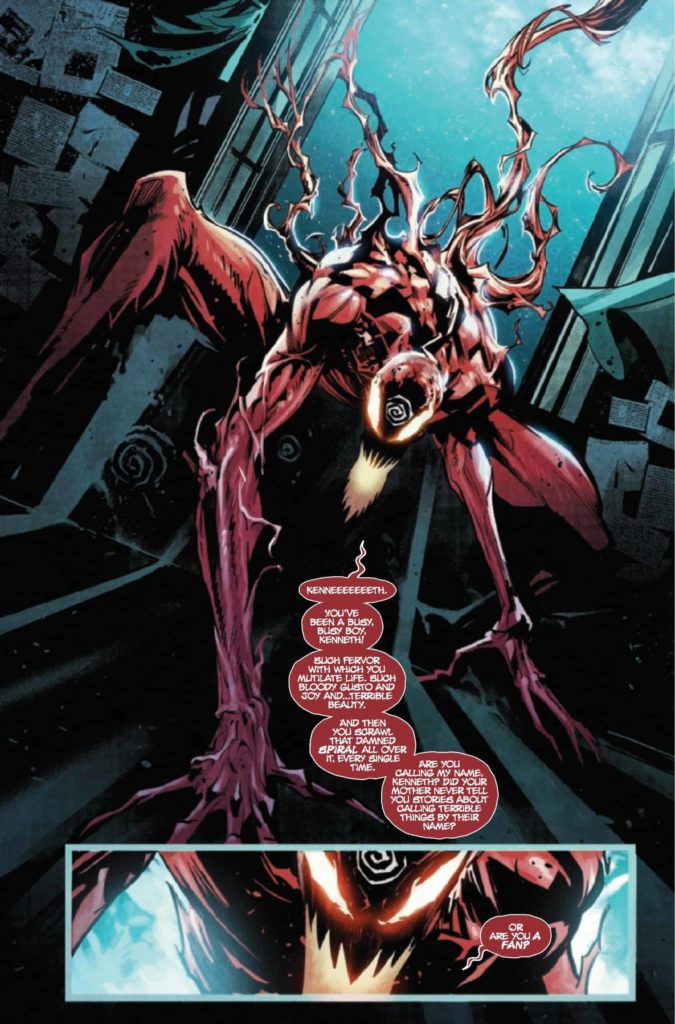 As a balance against Carnage’s new direction, we also have a backup story starring Cletus and written by Carnage co-creator David Michelinie, set during the character’s 90’s heyday. The story has a young child in Juvie try to recruit Cletus to murder some bullies that have been giving him trouble. Cletus agrees, but his spree rattles the child, who ultimately decides to stand up to the killer and decry his brand of bloody vengeance. While Ram V’s take on Carnage is influenced by Donny Cates’, who writes the character as a supernatural agent of chaos, Michelinie’s version is someone who really wants to be an agent of chaos. Michelinie has always written Cletus as a bit pathetic, which makes sense for a character who uses his power to hurt people weaker than him and literally nothing else. His Cletus is a blowhard big-talker who shouts his flimsy motivations to anyone who will listen. He even falls for the same trick he fell for many times in the 90’s – someone telling him “Since you’re an agent of chaos, then the most chaotic and unexpected thing for you do would be doing exactly what I want.” So naturally, he’s ultimately defeated in this story by being stood up to like a schoolyard bully. Carnage rules, up until he picks on someone with a backbone.

Finally, Ty Templeton gives two more newspaper-style cartoons on the final page to act as a bit of a palate-cleanser. After two stories of filth and murder, it’s nice to end on two cuter, bouncier strips about murder. His cartoons were a highlight of Carnage Forever, so I’m glad to see the tradition continuing strong.

Francesco Manna starts the issue by cutting lose – reality tears apart and detective Shayde is stretched like taffy as a dimensional portal sucks him in amidst imagery of floating shapes and eyeballs. After that, he’s free to scale things back for a creepier, more grounded aesthetic. Caution tape, grimy warehouses, and rooms lit by a single open window. It’s a detective thriller. But as soon as Carnage shows up, expect more close-ups on molecules and magic portals- something colorist Dijo Lima gives an unearthly glow to. The second half of the issue involves Carnage using Hydro-Man as a conduit for the aforementioned magic portal, and Lima depicts it by showing Hydro-Man’s cool blues becoming overtaken by Carnage’s piercing reds. When they struggle against one another, the red and blue overlap to create a neat, 3d-glasses effect. It’s a moody, blue comic that sells its descent into chaos.

As for the backup, Rom Lim is someone who’s been drawing symbiotes since the 90’s, and his work with Roberto Poggi harkens to classic Carnage. Carnage is a writhing mass of red and black spaghetti strands wrapped around a muscular man like a suit. Colorist Roberto Poggi even gives him his pink void of a mouth. As opposed to Manna’s more moody and mysterious tone, Lim goes for a cartoonier aesthetic, complete with plenty of off-screen PG-13 kills. Poggi renders it all in bright reds and oranges – this is much more the Carnage you can imagine leaping from the pages of Spider-Man.

VC’s Joe Sabino letters both stories, and you can tell he’s having fun indulging in the occasional 90’s horror-style font for credit-boxes and captions. The bolding of some words helps establish the flow of the dialogue, which helps for a motor-mouth like Carnage. 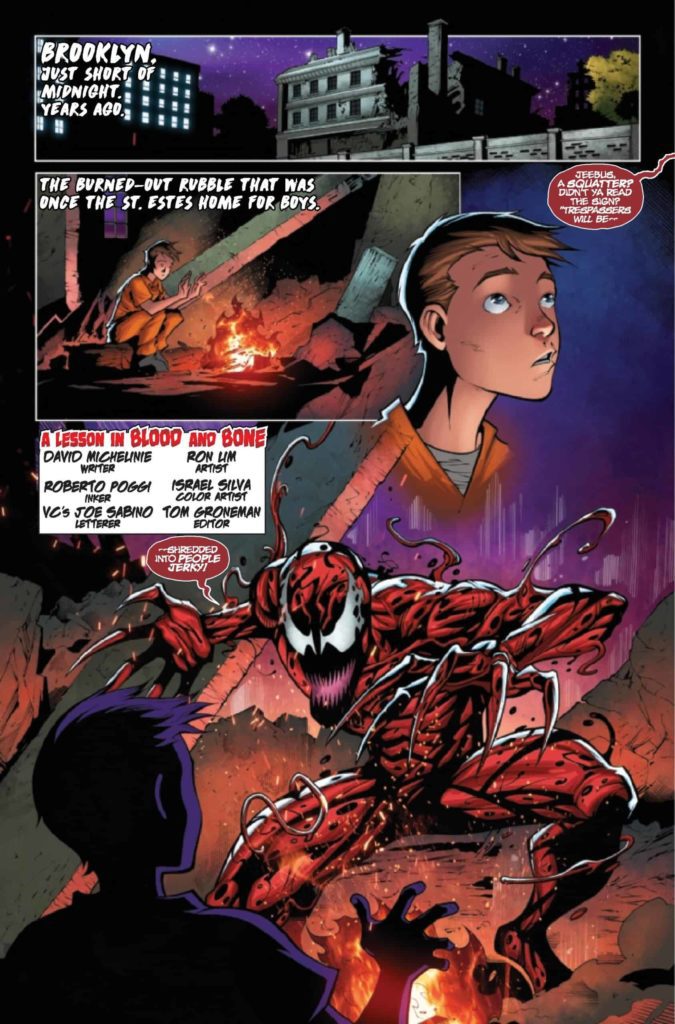 Ty Templeton’s cartooning is effortless and bouncy. He effectively simplifies the writhing, slimy designs of the symbiotes into Peanuts-esque characters.

Carnage #1 is more than anything a statement of intent. The new series is moving past serial killers into more grandiose, cosmic horrors. How that will look is still unclear, but the previews given by the comic’s brief interludes into portal-induced madness definitely keep me curious.

In a post-Cletus haze, the Carnage symbiote has decided to move on to greener pastures, They won't stay green for long.Review: Blood is Thicker than Water in CARNAGE #1