The Black Hammer: Visions miniseries from Dark Horse Comics has been a delight so far. And Black Hammer: Visions #6, from writer Cullen Bunn, artists Malachi Ward and Matthew Sheean, colorist Dave Stewart, and letterer Nate Piekos, is no exception. This creative team brings us back to the brilliant background character of Cthu-Lou. And in a simple one-shot, they make us thoroughly fall in love with the character. 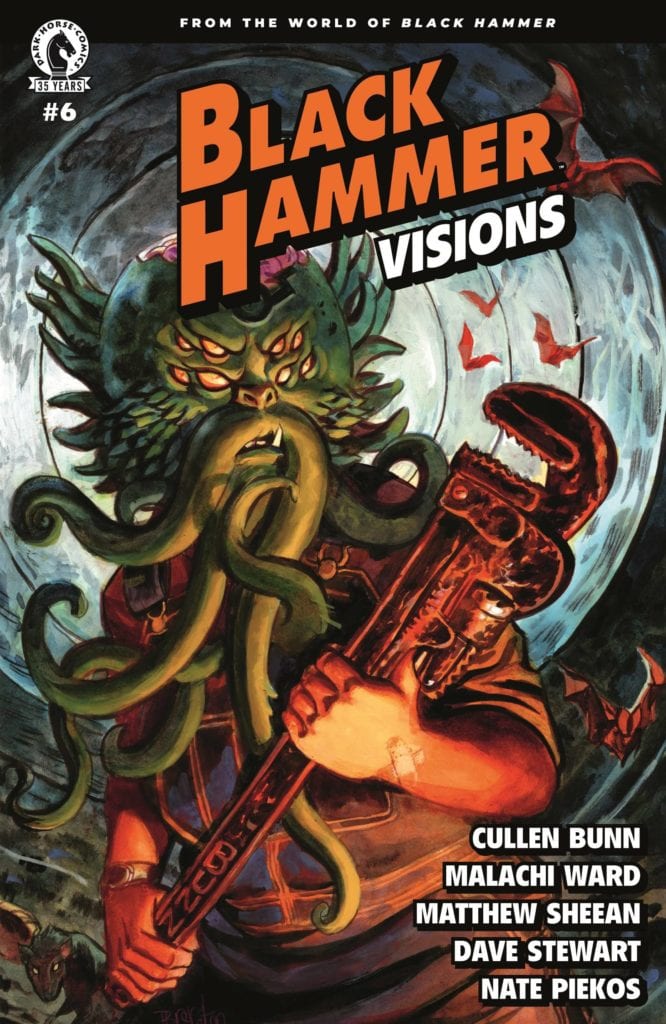 Bunn gets Cthu-Lou’s voice just right. Cthu-Lou, or Lou as he prefers to go by, is a plumber who had a run-in with a Lovecraftian god. The monstrous god bestowed great powers upon Lou, turning Lou into its herald. With a new tentacle beard, and six eyes, one would expect Lou would have no choice but to take to the job set before him. Instead, he sits on the couch and watches TV, hoping someone will finally hire him to do some plumbing again.

Bunn captures this dichotomy brilliantly. From the get-go, we see Lou watching TV as reporters describe mysterious celestial phenomena. We’re led to believe these things have something to do with the Lovecraftian god in the sewers. But Lou turns the channel over to sports. He doesn’t care. He wants nothing to do with all of that. And as Lou runs into more of the god’s minions, even their speech patterns couldn’t be more different. “Look around you, Cthu-Lou. See what your defiance has wrought,” is the kind of melodramatic speech we hear from these Lovecraftian horrors. “I don’t suckle at no god’s teat,” or “Ferfucksake,” is the kind of response that’s typical from Lou. He’s not polished or proper. He just wants to get on with his life.

Ward and Sheean create an interesting mix of paranormal and natural art. Through the smallest details, they can turn a seemingly normal location into something spooky. When Lou blows cigarette smoke into the faces of some teens, it lingers in the air like a thick fog. And when we see the Lovecraftian god talking with rats in the sewers, Ward and Sheean make a point of giving us no frame of reference for how big they all are. So when a rat crawls through Lou’s window and turns out to be the same size as him, it’s a terrifying shock.

Stewart’s color palette for this issue is relatively dim. When we see Lou in his home, the TV is the only thing lighting the scene. When he’s at the bar, the lights are low. It’s only in the sewer, of all places, that the colors get bright. At least for a bit. As Lou and a bunch of other random people walk through the sewers, the coloring is darker than ever. Every character looks as though they’re holding a flashlight under their chin. It’s spooky. But when Lou actually talks to the elder god, we see neon blues, yellows and greens. Maybe what Stewart is telling us is that, despite its drawbacks, this god is offering Lou a life of significance and color. And even in the face of that, Lou is turning it down for the life he knows and loves. Even if it might seem a little dim in comparison. 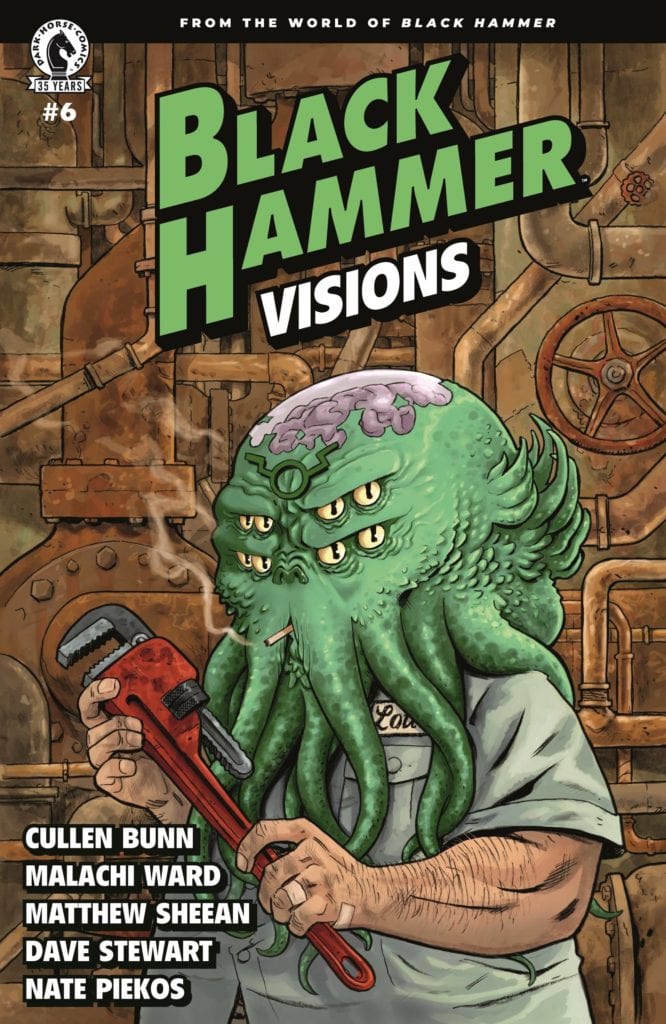 There’s so much to love about Piekos’ sound effects in this issue. Sometimes the lettering is small and almost hard to notice, like a little “Hmf” from Lou as he sits on the couch. Other times the letters actually become part of the panel. A “LOOUUUU…” is what beckons Lou into the sewers, rising from one panel into the other. But while the sound effects of this issue are fantastic and dynamic, the lettering for the dialogue feels a little static. Every line of dialogue is delivered in a single chunk. There are no joins or balloon connectors to space out each beat, and sometimes beats feel like they get lost in a paragraph. Of course, if it’s in the script that way, there’s often not much a letterer can do. And Piekos makes the most of every other aspect of his job in this issue!