Dark Horse Comics’ Black Hammer Reborn #2 is one part morality play, two parts fever dream. Writer Jeff Lemire, artist Caitlin Yarsky, colorist Dave Stewart, and letterer Nate Piekos show us how the life of a superhero can turn on a dime. The world Jeff Lemire has created with Dean Ormston in Black Hammer is now a sprawling universe. This series gleefully reaps the rewards of their hard work.

Lemire immediately shows us how Rose Weber is just like her mother, Lucy (AKA Black Hammer II). She’s curious, ambitious, and very, very irresponsible. But the world of Black Hammer is full of surprises, and Rose isn’t ready for all of them. As this issue turns from scenes of teenage rebellion into dreamscapes and twisting realities, Lemire sends us back in time to catch up with a younger Lucy Weber. It’s no accident that this happens. Lemire is not only hinting at where some of the danger, both metaphysical and natural, may be coming from, but he’s also showing us that Lucy, in her heyday, got herself into as much trouble as Rose.

Yarsky’s art in the previous issue sometimes dabbled in the world of melodrama. In my review, I suggested it might be that she was counteracting the mundanity of Lucy’s life with big expressions and flare. Black Hammer Reborn #2 seems to confirm this theory. We see both Rose and a Lucy in scenes where they’re in grave danger. They smirk and smile, only occasionally getting very expressive. Even when scenes twist and flip upside down, Rose doesn’t look too worried. Yarsky brilliantly savors the really expressive moments of her art. She balances big stakes with sly smiles, and familial arguments with wild faces.

Stewart continues some of the themes he underlined in the last issue. His colors often look dark or muted. The scenes we see look as though they are occurring at night. But it’s the moments of superhero-level stakes that are colorful and bright. Windows into the Parazone are brilliant green and yellow, just like Lucy’s Black Hammer costume as she fights crime on rooftops. But when we see Skulldigger in this issue, he creates a tone that sits in-between these extremes. As a character, he’s colored in greys, whites and blacks. But behind him, the scene feels both dark and colorful at once. The night air is a soft purple, with rays of pink and orange light radiating from below. It’s as though Skulldigger is neither mundane nor is he super. He’s his own flavor entirely. 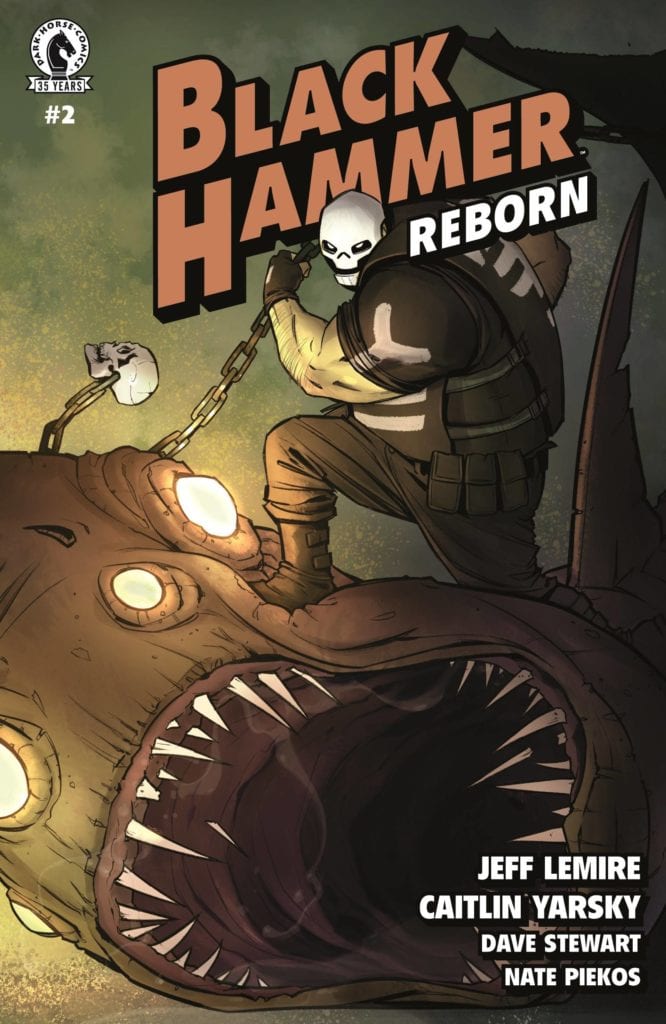 Peikos truly writes sound effects that you can hear. And their brilliance lies in their subtle differences. As the issue goes on, there are many sounds that repeat themselves. The “choom choom” noise of lasers is uniform. So is the “chak chak” of a weapon, or the “bzzz” of a phone. These are the unchanging noises of machines. But the “SHRAK” of a portal opening is unlike the “SHRACK” of it closing again later on. The fonts look the same, but as it appears it begins with a big S and H. The sound hits us like a wall, then fades away. And as the portal disappears, it’s the A, C and K that are large now. It gives one last earsplitting noise before fading out altogether. Piekos’ letters change in subtle ways, but the sounds they represent are as clear as day.