Review: BILLIONAIRE ISLAND Brings Cathartic Satire to the One Percenters

Ragging on the rich may be the order of the day for current fiction, but few would likely be able to do it quite like Snagglepuss Chronicles and Second Coming writer Mark Russell. Here the satirist teams back up with Flintstones co-creator and artist Steve Pugh for “Billionaire Island” #1, a brutally funny examination of the ultra-wealthy’s lifestyle – and what will one day come of it. Welcome to Billionaire Island, where anything goes…if you can afford it. But the island’s ultra-rich inhabitants are about to learn that their ill-gotten gains come at a very high price. 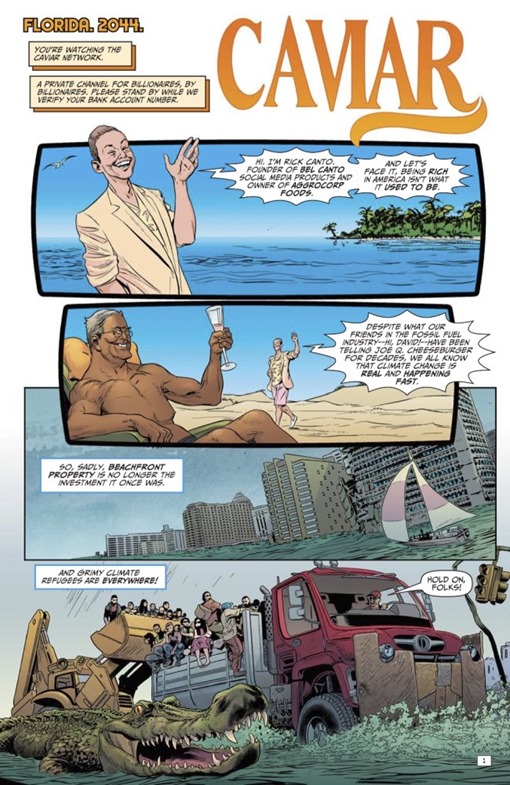 Mark Russell‘s brand of sardonic language and gallows humor brings the overall message to immediate life in “Billionaire Island” #1. The script introduces the plot to be at where many believe to be at the near-apocalyptic endgame of capitalism, but it’s presented with the hokey advertising style of a 90’s gameshow host. The comic keeps this kind of language and narrative presentation over the top of much more grounded realities – some relatable, some grim. This is where Russell’s satire makes itself at home. The comic also has a catharsis at its core; a sort of “coming storm” if you will. Without getting into spoilers, this should prove to be a grossly satisfying experience to get to watch play out. The comedy mixture of absurdist black comedy and flashes of a brutal underlying reality make for a sharp, even read that is both hilarious and compelling. 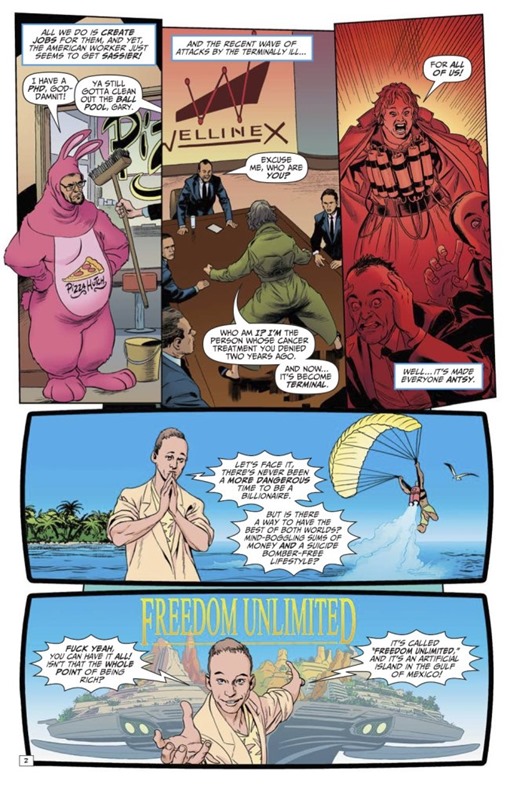 Artist Steve Pugh between goofy cartoonist style and natural character art in ” Billionaire Island” #1. On the one hand, Pugh’s work is fantastically detailed with human characters that all look distinct and realistic. On the other, he also knows how to implement facial expressions and absurd settings to match Russell’s satirical script. The primary billionaire antagonist is given features that are vaguely rodent-like, while also exuding physical persona of a cocky used-car salesman. There’s also a scene involving a giant hamster wheel which (again, no spoilers) really helps set the tone both visually and story-wise for this comic. Much of the winding aesthetic this issue has is due to the colors from Chris Chuckry. From the 80’s neon hues of the tacky commercial segments to the grounded colors of this world’s harsh realities, the whole book is given a top-notch visual experience in terms of character, setting, and tone. 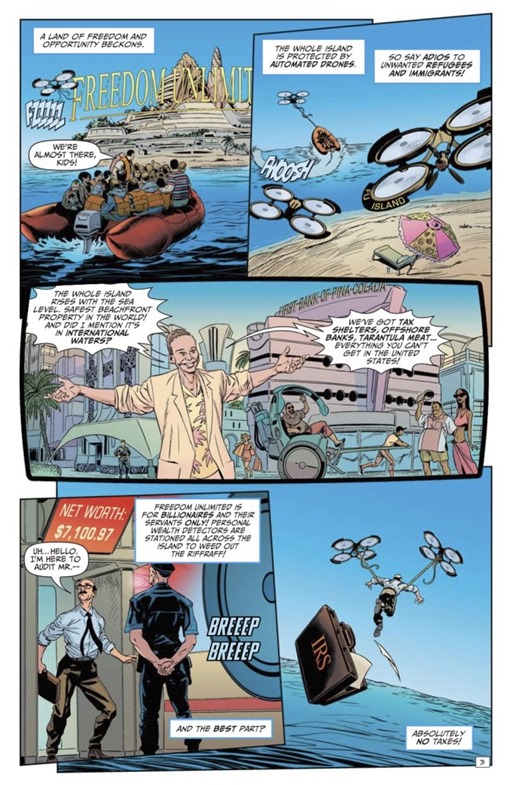 “Billionaire Island” #1 is Mark Russell and Steve Pugh teaming up to do what they do best. Russell’s brand of satire hits the sort of absurd marks found in political cartoons, but on a larger and more poignant scale. The visual direction of the comic from both Pugh and colorist Chris Chuckry creates a vivid experience that lends itself perfectly to the story being told here. Albeit a bit on the nose, the timely exigency of this series coming in such a politically charged moment towards the one-percent is sure to make it find an audience ready to partake in some much-needed satire. Be sure to pick up “Billionaire Island” #1 when it hits stands on 3/4!

Review: BILLIONAIRE ISLAND Brings Cathartic Satire to the One PercentersMark Russell brings his personal brand of commentary and satire to capitalism's endgame.