Review: A Battle Royale With Christmas Elves In BATTLEPUG #2

The last Kinmundian and his loyal Battlepug (a.k.a. Sprinkles) recently reunited with Bryony, their plant mage friend, so she could show them a message from the warrior’s cruel, former overlord—the King of the Northland Elves. Fueled by revenge, the Kinmundian sets out to confront his adversary, while the other mages journey to the city of Rensselaer to find additional help. But what both groups don’t know is that the King is dead, and a more formidable foe lies in wait.

Find out what happens when BATTLEPUG #2 from Image Comics hits store on Wednesday, October 9th.

With the Kinmundian and Sprinkles are off on their mission to the Northland, the mages make their presence known to the town of Rensselaer and its mayor: Callistus the Pirate King, or rather, the reformed Pirate King. The eccentric old fellow claims to have reformed the once corrupt town and focused on other pursuits, such as his self-proclaimed amazing “hamball” meal. 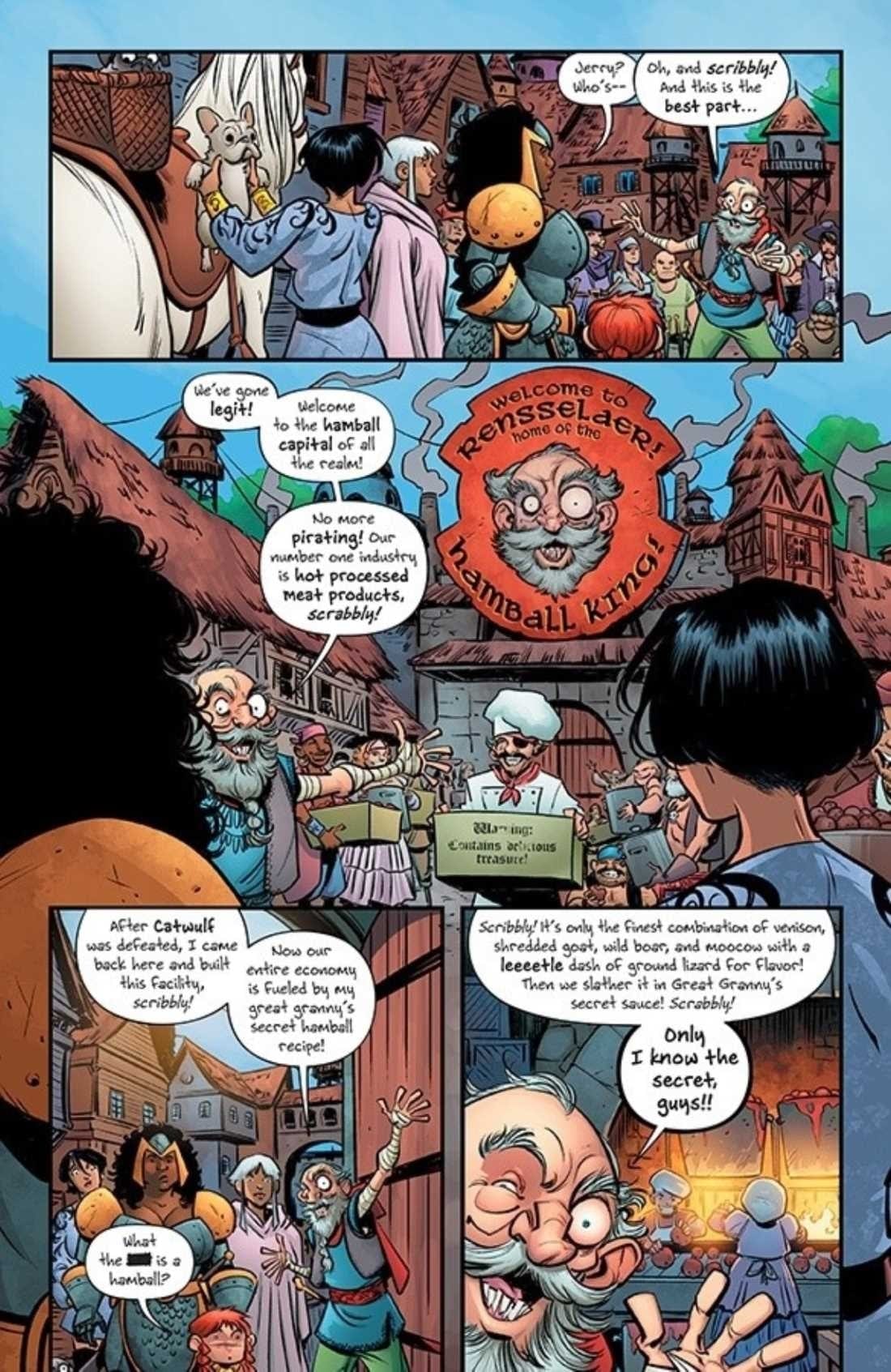 Our group (mostly Bryony) isn’t immensely impressed, but they believe the former villain to be trustworthy enough to help them in their quest. He’s the only person around who knows much of anything about the Elven Kingdom, and they believe he will be a valuable asset. Fortunately, he agrees to help, and the ever-growing band of heroes makes it way to the Kingdom.

As the story progresses, we seamlessly transition to the Kinmundian and the Battlepug in the northern lands of the Kingdom, confronting a group of elves lead by none other than the Putin look-alike, Jofel!

It’s these hilarious surprises (the unicorns, Jofel, etc.) that writer Mike Norton leverages to keep the reader on their toes throughout this narrative, always wondering what could happen next. And that feeling only grows when the Queen of Kingdom makes herself known to our heroes. What fate could possibly await them?

Norton and Allen Passalaqua’s unique brand of art plays wonderfully into the narrative’s quirky tone. The landscapes, buildings, and characters have an almost cartoonish quality to them, as if one were in the midst of a Looney Tunes episode—albeit with more adult humor. And this works perfectly for the series. The story’s bizarre features, such as Jofel’s candy cane hands, are exactly what make us love this series. This applies to CRANK!’s unique lettering as well—the fonts often look like they were handwritten, adding to this story’s sense of originality.

Norton and Passalaqua’s main cover art features an epic fight between the Kinmundian, Sprinkles, and the elves of the Northland Kingdom. This scene stokes readers’ anticipation levels by giving them a taste of the exciting fight to come.

Tony Fleecs’ variant cover features bright and colorful illustrations reminiscent of the My Little Pony series, giving readers a lighter tone to the murderous unicorns Bryony and rest must face.

BATTLEPUG #2 is a thrilling addition to the first issue, taking us further into the Kinmundian and team’s world through insane antics. We’re locked in tight and can’t wait to see how Norton, Passalaqua, and team continues to blend themes of epic fantasy with endearing low-brow comedy.

Do you think the Kinmundian and Sprinkles will be able to escape from the Queen’s grasp? And will Jofel get his revenge? Let us know in the comments below!

Review: A Battle Royale With Christmas Elves In BATTLEPUG #2The zany adventure continues as our warrior hero and his trusted steed take on an army of elves. But the hilarity leaves plenty of room for heartfelt moments.