Scott Snyder and Greg Capullo take Batman through a wasteland of horror and heartbreak in the second issue of Last Knight on Earth.

The whole team is back together again for the last chapter of their Batman story that began in the New 52. Jonathan Glapion and FCO Plascencia have the inks and colors, while Tom Napolitano is handling the lettering. There will always be a soft spot in my heart for this creative team. Capullo has created a Batman for a generation; this is my Batman. Hopefully, this is not Snyder and Capullo’s last Batman tale.

Napolitano’s lettering is top-notch. The way the Joker’s speech bubbles appear scratchy and hurried always works so well. The Scarecrow’s words are stylized in such a way that you know he’s trying to be scary and haunting with his voice. Deciphering who is speaking and what narrative you’re reading is straightforward.

Glapion always captures the greatness in Capullo’s pencils and keeps the finished product looking prestine as if Capullo initially drew it in ink. FCO always mixes dark and gritty with bright colors when appropriate, which makes every page a pleasure to look at. Alfred is confronted by the unlikely duo of Bane and Scarecrow, and while Scarecrow is hanging onto Bane Yoda-style, Bane’s veins seem to glow almost illuminating the alley. 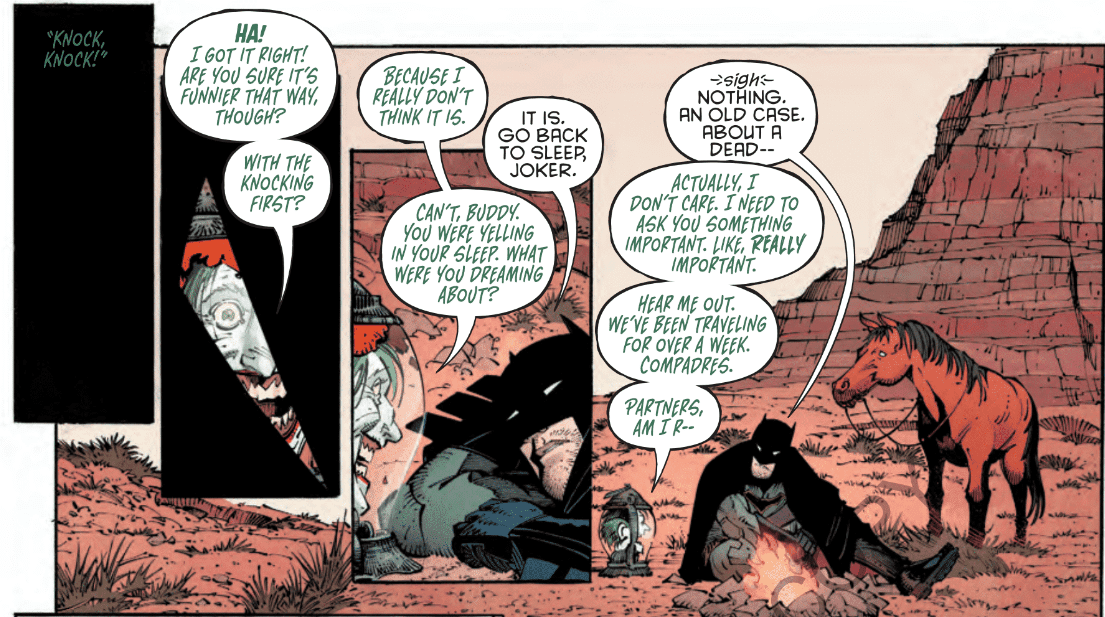 This post-apocalyptic Batman story has a Mad Max type of feel mixed with some Bladerunner and Fallout. It feels like every part of the country has its own horrors to deal with. Speed force storms, Hush soldiers, Animal Men, haunted tanks, formerly boiling oceans, calcium coastlines made up of fused bones, the Red and Green wreaking havoc, all the while Joker wants to be the new Robin.

Character designs for this future scenario are incredible. Every character appears as if they’ve been through something pretty terrible in order to be where they are now. Wonder Woman has a facial scar and a mohawk, Luthor is a shriveled old man, Scarecrow has no bottom half, and his fingertips are syringes. We discover that someone connected to Batman is responsible for all this terror and destruction. Looking like the final boss version of Batman, Omega rules all.

Snyder refers back to many aspects of his writing during the New 52, even his run on Swamp Thing. The Court of Owls is by far the best aspect to continue from that run, and their appearance in this book is truly a shocking reveal. If this is, in fact, the last Batman story from this creative team, I hope a different team gets the opportunity to elaborate on the madness that caused this apocalypse to happen. Why are there crocodile men, imp deathgrounds, and what about this Space Cavalry?

I’m not even an Aquaman fan, but even I want to know why the oceans were boiling and why the coastline is made up of bones. Why on Earth would anyone put the Joker’s head in a lantern? How did this speed force storm trap three Flashes in it? Why is the dead Spectre’s giant cloak now a portal? What happened at Fort Waller, and not to be dismissed, what happened to the real Superman?

If issue three of Last Knight on Earth doesn’t explain a few of these events, hopefully we’ll have a mini-series in the near future to cover the end of the world as Bruce knew it. So many aspects of this story are incredibly intriguing. This series could’ve been lengthened to a maxi-series just to cover all the events that are being glossed over. Maybe that’s a story for Snyder to pass down to a young writer trying to make their mark on the Batman mythos. With stories of caged universe hearts, god engines, zeta cannons, and speed force tornadoes, sign me up.

Issue three has quite a bit to wrap up to finish off this final chapter, but I am locked in and excited for what Snyder has in store.

Would you let a talking Joker head be your Robin? Let us know what you thought about this comic in the comments below.