Review: BATMAN/CATWOMAN #5 and the Hysteria that Follows Darkness

It’s often troubling to read a particularly dark story. That’s probably why we refer to them as “dark” in the first place. But creators have several tools to help us take their dark themes in. Some creators push the pedal to the metal. They say, “Oh, you think this is dark? You haven’t seen anything yet.” Others almost ignore it. Their characters, as a coping mechanism, push aside their trauma and fill the silence with laughter. Batman/Catwoman #5 fills its silences with hysteria. As this plot kicks into gear, writer Tom King, artist Clay Mann, colorist Tomeu Morey, and letterer Clayton Cowles show us that these characters are starting to break under the pressure.

King’s approach to the darkness in this plot is almost one of ignoring it. Catwoman gets drunk and taunts a bartender instead of grappling with some of the things she’s seen. But she has a madness that is just below the surface. It’s telling that we get three plotlines in this issue, and in only one of those is Selina drunk, but she acts with similar abandon in all three. She copes through self destruction. She finds comfort in witty banter and whimsical violence. But it all ends in blood and sweat. And the fact that these three plotlines are years apart, shows that she’s been carrying this trauma with her for a long time. King pushes deeper into what it’s like to be a superhero. He asks us to look at the scars that are left once the bright sound effects have long faded away. 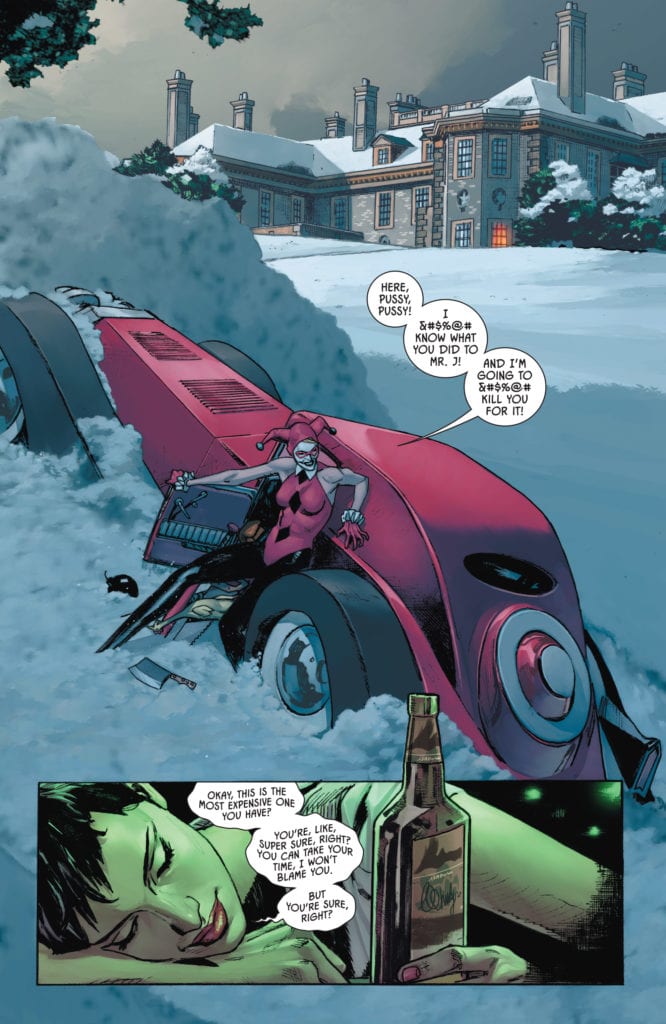 Mann never lets us forget the dual nature of Selina’s self destructive tendencies. She’s a funny drunk, but she’s also brutal fighter. One page shows old Selina, looking down through her sweat at someone she beat the crap out of. Mann interrupts that panel by overlaying a picture of a younger Selina from the panel below. She leans against a wall with a bottle in hand, a slight smile on her face. She seems harmless one moment but ruthless the next. Similarly, Mann shows Selina’s snap from comic book violence to true gore. She dodges bullets and delivers karate kicks, only to pummel someone into a bloody mess a page later. Catwoman is unpredictable and Mann shows us this has potential to be just as scary as it is charming.

Morey has reds, blues, and greens representing themes and moods in this issue. The red is always used in instances of violence. Even when it seems fun or bright, Morey quickly subverts it and brings it back to gore. Red surrounds Phantasm in every scene. She is an Angel of Death, after all. But it follows Selina into the future. We begin to wonder how much Selina has become a product of Andrea Beaumont’s actions, rather than Bruce Wayne’s. Morey visually links the two almost as though he’s asking us to spot the difference. 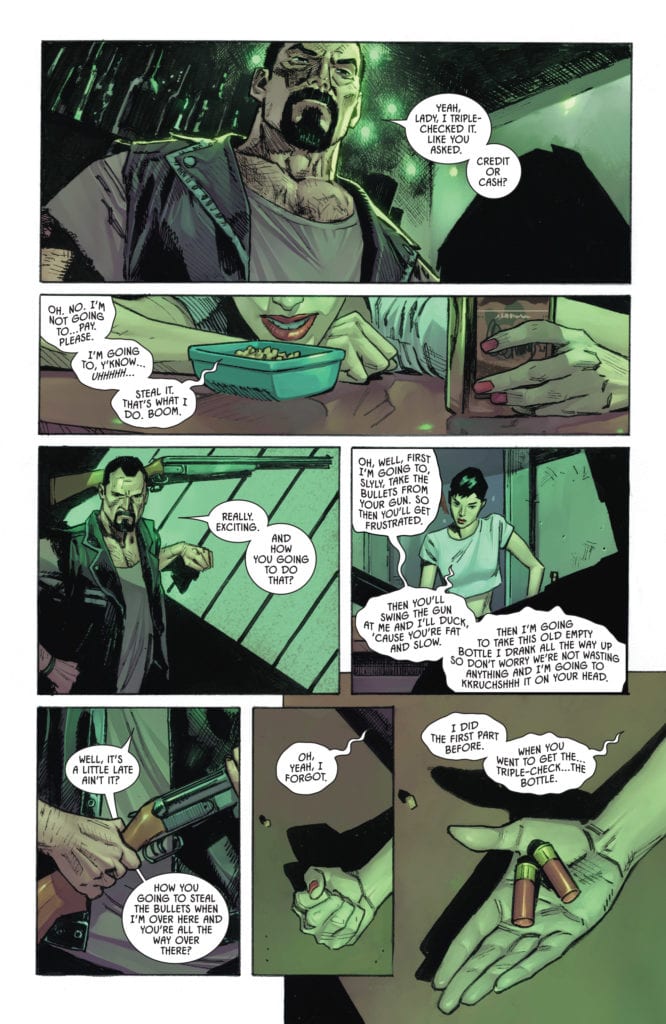 Cowles also shows us the link between Andrea and Selina. At one point, we see Andrea talking to one of her victims. (If “victim” is the right word.) She talks and her words surround him. Her speech bubbles create a wall around him, on the page. Visually, he’s boxed in by her, trapped. Cowles is showing us that her words tell him that he’s not getting out of this. Later, when we see Selina fighting with someone in the future, she does the same thing. In the midst of the battle, she speaks to her opponent. Her speech bubbles surround the other character, making it visually clear not only that Selina has the upper hand, but she’s also learned a thing or two from Andrea Beaumont.

Batman/Catwoman #5 shows the cracks that are forming beneath the surface. From its first issue, this story has been about the scars a life of crimefighting can bring about. Now we’re actually beginning to see where those scars came from. King, Mann, Morey, and Cowles continue to do some of their best work. Pick up Batman/Catwoman #5, out from DC Comics June 1st, at a comic shop near you!

BATMAN/CATWOMAN #5 shows the cracks that are forming beneath the surface. From its first issue, this story has been about the scars a life of crimefighting can bring about. Now we're actually beginning to see where those scars came from. King, Mann, Morey, and Cowles continue to do some of their best work.Review: BATMAN/CATWOMAN #5 and the Hysteria that Follows Darkness