DC Comics’ Batman/Catwoman #10 is pure chaos. All of the slow, intricate threads have lead to one big, messy ball of violence. Writer Tom King, returning artist Clay Mann, colorist Tomeu Morey, and letterer Clayton Cowles bring this series to a fever pitch. Anything can happen now.

The timelines in King’s script, three threads set in different moments of Selina’s life, are more interrelated than ever. Often, King has a character ask a question in a scene. The scene cuts off, interrupted by another timeline where another character almost seems to be answering that same question. King uses this to make sure we’re paying attention. At one point, the end of one of Catwoman’s lines feels incredibly disturbing, until we see she’s talking to someone else in another time. Some of this script, however, does feel almost like a tantrum. Characters scream into each other’s faces, grasping at anything they can say that would be hurtful. It feels like a firehouse of information and dialogue being blasted across the page. Some lines hit hard, others just miss the mark. And after 27 pages of punching and yelling – something that’s entirely out of character for King to write – the stakes begin to slip away. This issue feels messy and a little unfinished. Though, with characters like these, it’s quite possible that that’s the whole point. Mann really emphasizes Selina’s power in this issue. With one important exception, Selina is either looking straight out at her opponent or looking down at them. She’s above them, they are powerless beneath her. She hunches over Joker, ready to rain fists down upon him. She even looks down her nose at her own daughter. But while this points to Selina’s power, it points to her own dysfunction too. She actually sees herself as above all of this. Mann often depicts her standing on one side of the page, arms crossed and looking unimpressed. When someone finally has the upper hand and towers over her, she looks up at them, furious and small. Mann tells us so much about who Selina is by what he shows us in her fights.

Morey gives each scene, or timeline, its own specific coloring. One scene is cast in the light green glow of a toy shop, and later the red of the Christmas lights outside. Another scene is washed in the soft pink of the Iceberg Lounge’s neon sign. The third scene is colored in a gentle blue, set during a cold winter night. The red is interesting. It begins by creating a Christmasy feeling, matching the red of Joker’s Santa suit. But it quickly starts to feel more like the scene is characterized by bloody violence and fury. The pink has a similar effect, as Selina fights her daughter. In a way, the pink lights remind us that this is Selina’s little girl that she’s trying to beat up. But it’s the gentle blue color that’s the most interesting of all. As Selina fights the Joker, she’s getting nothing out of him. Her punching isn’t relieving any of her stress, his tormenting of her is met with matter-of-fact retorts. The scene, though actually violent, feels sterilized and unemotional. It’s just another day for these costumed hooligans in Gotham, and that’s exactly why Selina wants to break the cycle. It’s the normalcy of it that disturbs her the most. 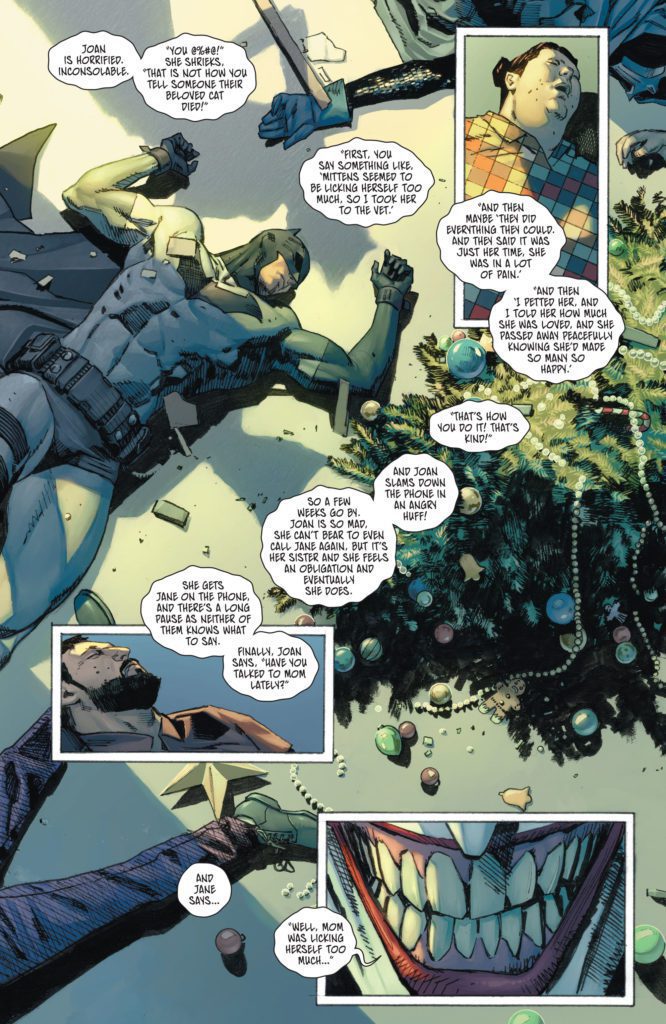 Cowles gives his sound effects so much character. The “SLASH” of nails slicing through the air is written in thin white letters that cut across the page. The “CRACKKCLICK” of a toy boat shattering against a wall is written in letters that look like they’re falling apart. When Joker is tossed onto a pile of display case Christmas presents, the “KRAANKKK” sound effect he makes is shown in big, hollow letters. It makes you feel like you can hear that the boxes are empty as Joker’s body hits them. Cowles is constantly coming up with new ways to make you hear this comic in your head. It’s fantastic.

DC Comics’ Batman/Catwoman has been slowly getting to its big climax for a while now. Issue #10 might just be it. While the script for this issue feels a little unrefined, it’s true to these characters. We’ll have to wait and see how much comes of this issue, and how much of the big picture we’re still missing. Pick up Batman/Catwoman #10, out now at a comic shop near you!

DC Comics' Batman/Catwoman #10 is pure chaos. All of the slow, intricate threads have lead to one big, messy ball of violence. Writer Tom King, returning artist Clay Mann, colorist Tomeu Morey, and letterer Clayton Cowles bring this series to a fever pitch. Anything can happen...Review: BATMAN/CATWOMAN #10 Hits Its Boiling Point