Review: BATMAN: BLACK AND WHITE #2 is Brilliant Through Simplicity

DC Comics’ Batman: Black and White #2 is absolutely fantastic. That’s because this anthology issue carefully bites off only what it can chew. Each story, by these brilliant creative teams, is incredibly simple. No need for exposition dumps, very few splashy fight scenes and even fewer twists. These are Batman stories at their best: quiet, methodical and mysterious. Just like the Dark Detective himself. 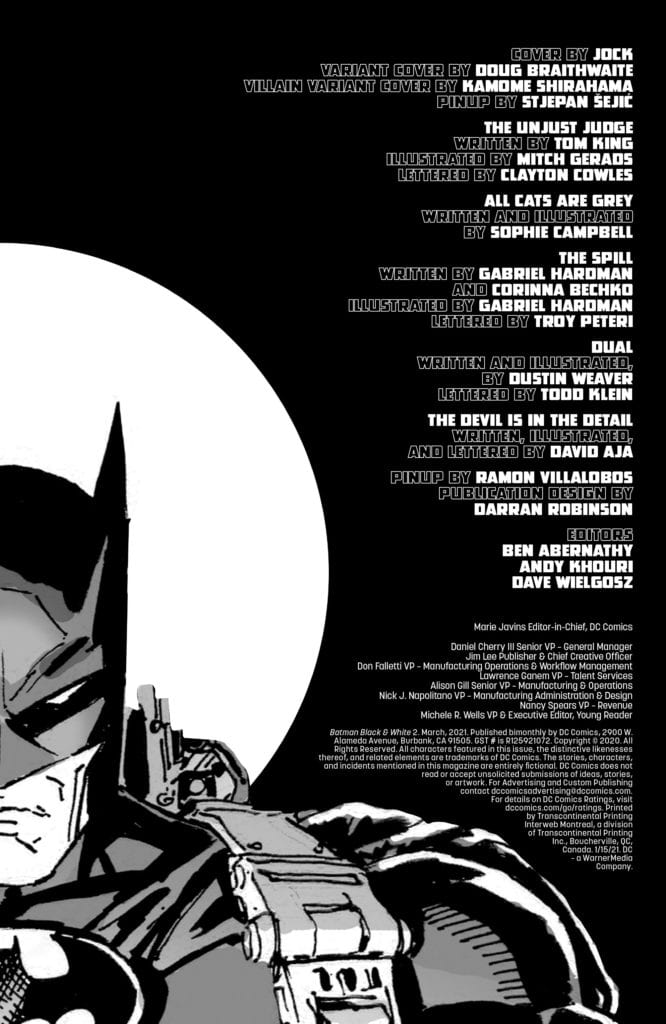 Written by Tom King, with art by Mitch Gerads and letters by Clayton Cowles, “The Unjust Judge” deals with faith and hard work. King brings Batman’s insecurities to the surface. He’s a man who wants to save everyone, and every failure rips him to pieces. Gerads will break your heart in this story. Batman’s face as he rails against his own failure, which gives way to overflowing grief, is devastating. And Cowles shows the relationship between Bruce and this man he’s trying to save. At first Bruce’s words come down towards the man, as though he’s more in control. But later, Cowles shows how they’re now on the same level, their words reaching upwards together. And with a brief panel, the man’s words stretch downwards, showing a shift in the dynamic and an acceptance of the situation.

“All Cats are Grey”

Written and drawn by Sophia Campbell, “All Cats are Grey” is the epitome of simple storytelling. Campbell uses no dialogue, no captions. Instead, we take everything from pictorial cues. It’s experimental but incredibly down to earth. Campbell shows in black and white, and ironically very little grey, a chase scene between Batman and Catwoman. It’s fun and fresh.

Written by Corrina Bechko and Gabriel Hardman, with Hardman on art and Troy Peteri on letters, “The Spill” is a story about Gotham in the rain. We see Batman as we rarely see him: helpless. Bechko and Hardman show us Batman’s panic through his inner monologue, and perhaps they tell us just a tad bit more than we need to know. But as Joker comes on the scene, Batman’s mind quiets. It’s as though he’s suddenly in a position he’s familiar with. Hardman echoes the chaos of each moment on the page. Panels within panels quicken the script to emulate Batman’s panic. Peteri amps up the drama with big sound effects. But Peteri doesn’t let the sound effect get in the way of the action, hollowing out the sound of waves so we can see the water engulfing everyone. It’s a Joker/Batman story that feels familiar and new at the same time.

“Batman: Dual,” written by Dustin Weaver, with art also by Weaver and letters by Todd Klein, is a high stakes supernatural mystery. Weaver creates a tense, intriguing plot. Batman follows an impostor, dressed in him but in white. Weaver’s use of poetic language to describe the chase gives this story the epic and dreamlike feeling it needs. Weaver occasionally wanders into the territory of overexplaining, but it makes sense. Batman is deeply confused and it’s almost as though he’s explaining events to himself, to figure it out. His art is detailed and often terrifying. Klein’s lettering is constantly changing. The cursive of Batman’s thoughts gives this story a mythic element. And Klein’s breaking up of dialogue and captions navigates the reader through what could otherwise be confusing pages. 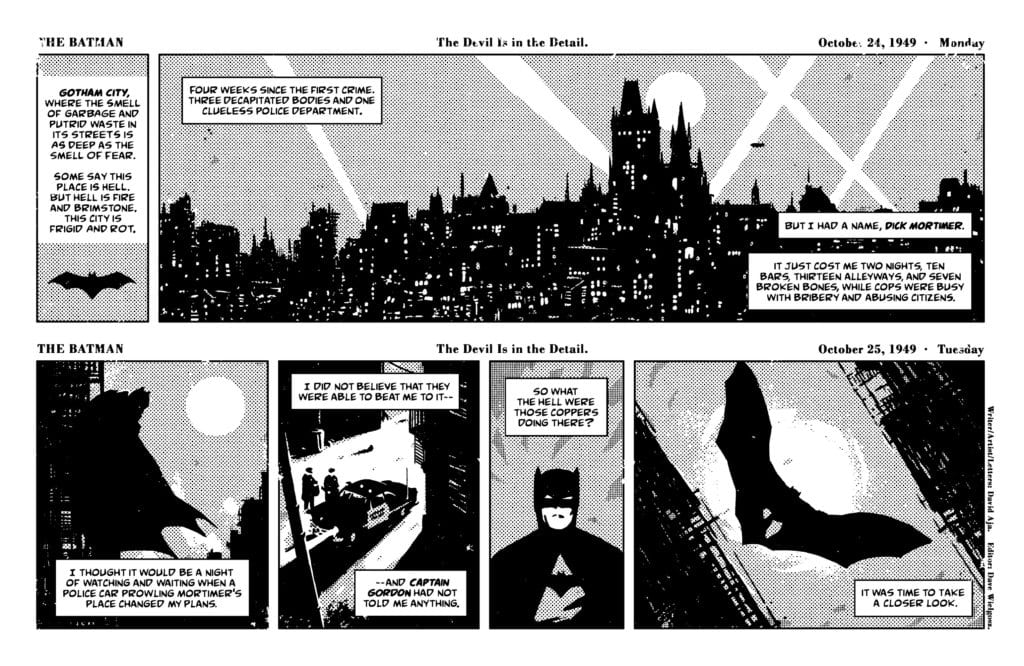 “The Batman: The Devil is in the Detail”

It seems each issue of Batman: Black and White has a perfect story. Last issue’s was a story by G. Willow Wilson, Greg Smallwood and Clem Robins. This issue’s is “The Devil is in the Details” with David Aja on writing, art and letters. Aja writes this short story like an old newspaper strip. He even dates each row and writes “Back on Monday!” at the end of those that “came out” on Saturday. He writes in a 1940’s tone, with Batman explaining each step of the plot for the reader. But he rises above the era, setting the story apart from mere plagiarism. For two days in a row, Aja writes nothing more than a Latin prayer.

His art uses Ben-Day dots to create the texture of an old newspaper. Some corners have streaks of white, mimicking a fault in the printing. And the art is so simple. Aja zooms us in on a hand with a gun or the side of a hooded face. His lettering shines with captions that take up a whole panel on their own. It’s a fantastic recreation of the old style. Everything about it screams a love of comics. Aja’s subtle writing, somehow not sacrificed by intense use of exposition, his minimalist art and his passion for the medium all make this a perfect Batman story. One for the history books, especially since it has the look that it’s from one in the first place.

DC Comics’ Batman: Black and White #2 is even more fun than the last issue. Every story is beautifully simple. Pick it up, out from DC Comics January 26th, at a comic shop near you!