Review: A Jumbled, Yet Mostly Satisfying Conclusion in BATMAN #85

This is it. Tom King’s epic story reaches its culmination with Batman #85, out this week from DC Comics. Here’s the critical question, though: does this final issue live up to the stakes set by the last three-and-a-half years of buildup?

As a storyteller, King is probably one of the most controversial creators in the game right now. 2017’s Mister Miracle was a universally-acclaimed masterpiece, while opinions on last year’s Heroes in Crisis event proved to be rather mixed. While his run on Batman has been strong overall, it has definite ups-and-downs, with those moments sometimes coexisting even within a single issue. 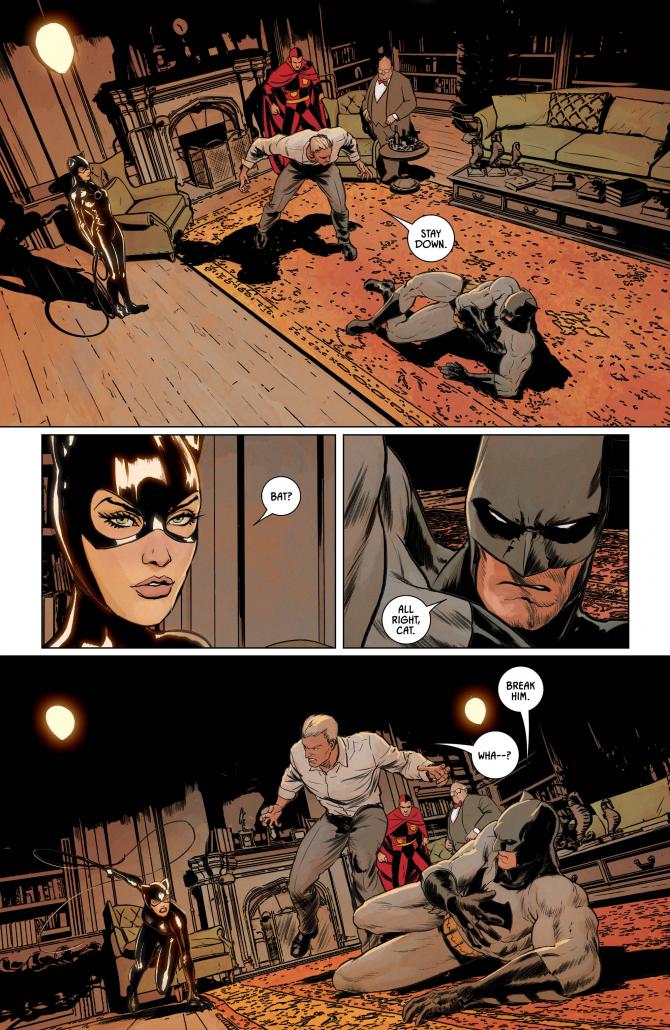 In typical King fashion, Batman #85 eschews linear storytelling, instead jumping from chronological point to point with nearly every page. We see Bruce duking it out with Thomas, then cut to him watching a football game, then to Alfred’s grave, then to jumping from rooftop to rooftop across the Gotham skyline, and so on.

There are plenty of highpoints throughout the book. For instance, we see King use the bar sequence as a kind of direct address, injecting some broader commentary on the character. As Bruce tells a fellow patron, “Stories change. People change.” Over eighty years of stories and continuity, Batman is not a character stuck in time; he evolves as his readers evolve. Over the years, we’ve seen Bruce Wayne continue to grow in complexity and develop as a character. He’s not a fixed entity, but rather one who changes with us.

That said, the book does suffer more than a bit from its jumbled presentation. There doesn’t seem to be any explicit intent behind the nonlinear motif from a storytelling perspective. Many of these scenes seem unnecessary, and only serve to obscure the story itself. The narrative in Batman #85 feels somewhat rushed and undercooked as a result.

For instance, King directly states his thesis by book’s end, answering resoundingly the question behind his entire run: can Batman be happy? It’s indeed a cathartic moment, but once again, pivoting to another scene somewhat undercuts the moment. Using an unorthodox story structure isn’t a bad thing…if it’s motivated. Here, however, it doesn’t really seem to be, and only gets in the way of an otherwise satisfying conclusion.

Batman #85 ends with an epilogue penned by incoming writer James Tynnion IV. The writer suggests, with ominous foreshadowing, that big things are on the horizon. Based on previous works, I’m confident that Tynnion is up to the challenge. Plus, it will be interesting to see how the tone of the series pivots following this issue. 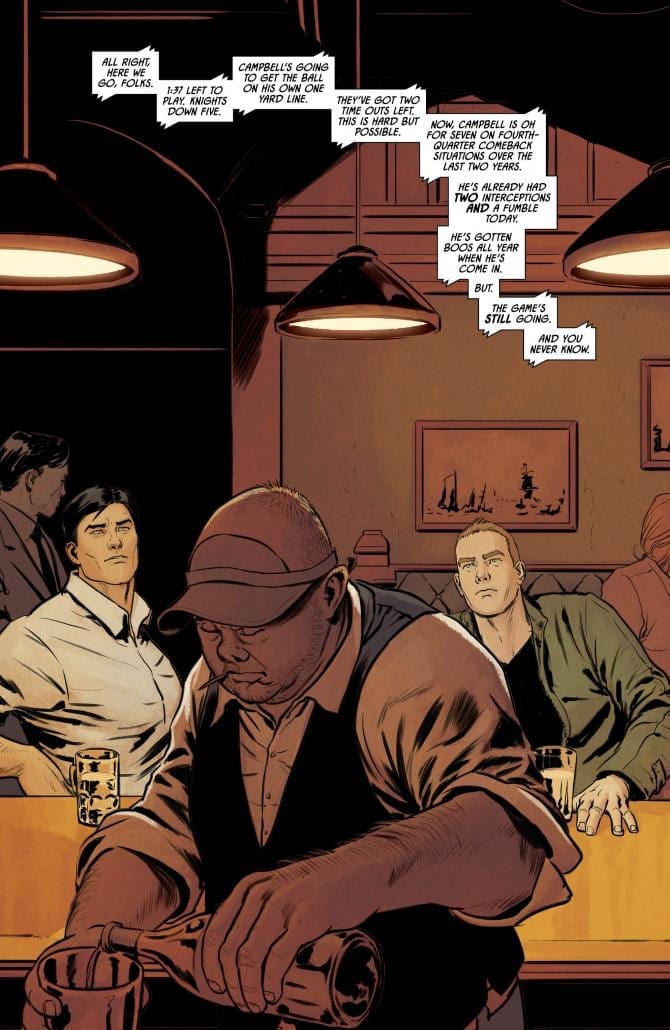 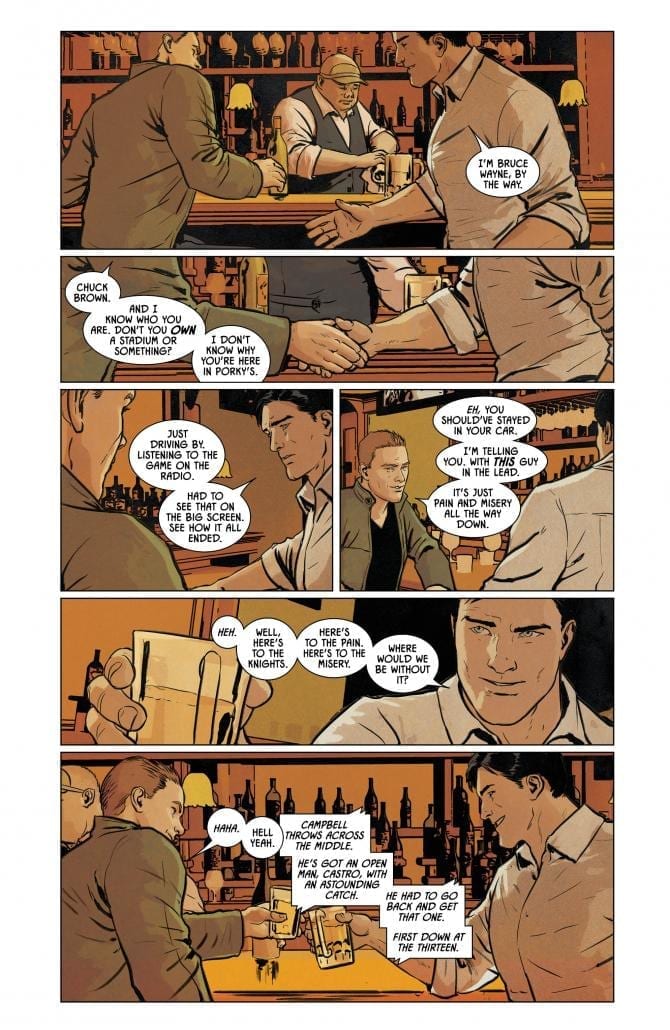 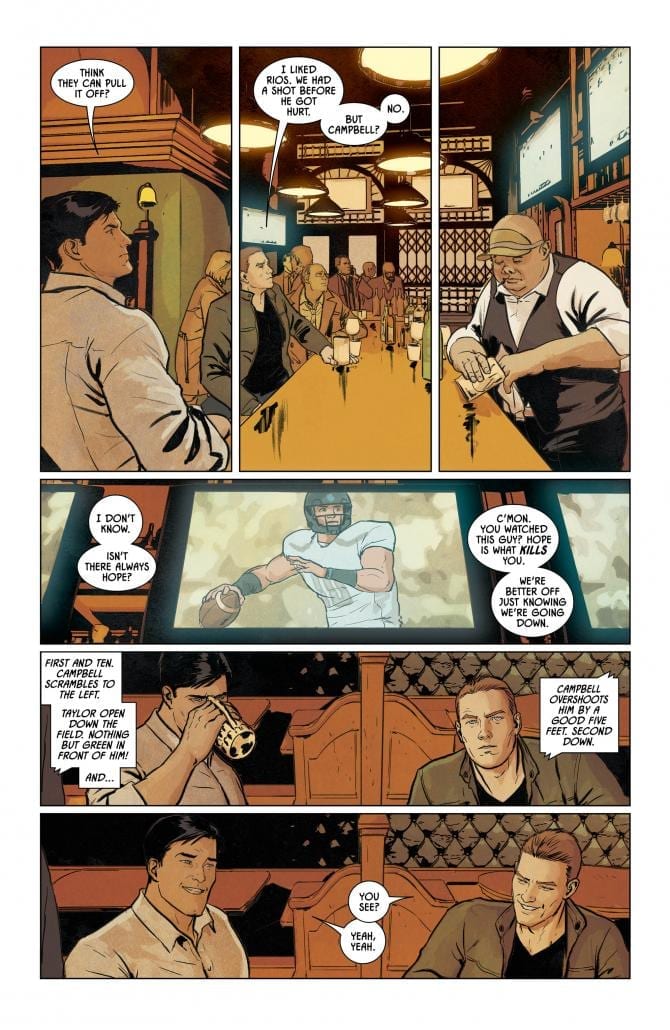 As Tom King bows out with this issue, we also say ‘goodbye’ to artist Mikel Janin, who will be replaced by artists Tony S. Daniel, Guillem March, and Jorge Jimenez beginning with our next issue. Janin’s artwork has been a consistent visual delight in Batman, and this issue is no exception.

The team clenly divide most of the pages in Batman #85 into horizontally-stacked panels of four to six per page. This offers some visual coherence, despite the constant temporal shifts. We also have the visual repetition–a hallmark of this creative team’s run–which adds to the effect. Despite the choppiness of the narrative, the artwork manages to nail the story beats. From one scene to the next, King and Janin tightly sync the pacing of the images and dialogue.

Perhaps Janin’s greatest asset as an artist, though, lies in his character designs. They’re consistently expressive and compelling, while simultaneously possessing a sleek and somewhat angular look. As many of the illustrations in Batman #85 are closely cropped-in on the characters, we really get to appreciate this visual element.

Jordie Bellaire, as always, comes through with the colors here. She employs several palettes for the different settings, with each really bringing the visuals to life. 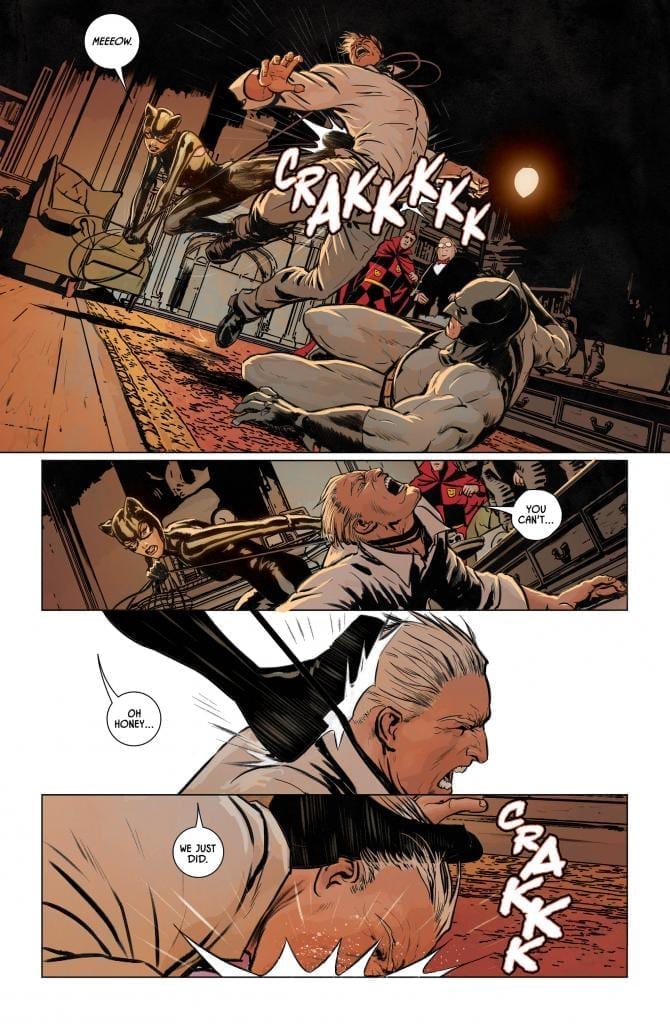 Love it or hate it, Tom King’s run on Batman was certainly one of the most novel takes on the character. Batman #85 condenses many of the themes and motifs that defined this series over the last three-plus years, so make of that what you will.

Review: A Jumbled, Yet Mostly Satisfying Conclusion in BATMAN #85With the setting and time changing every other page, BATMAN #85 has a rather jumbled presentation that detracts from the story's climax. There are, however, enough genuinely compelling moments to make the book work overall.