Review: Farewell to the Father in BATMAN #83

For Bruce Wayne, Alfred Pennyworth was more than his loyal butler. He was a surrogate father, someone who was always there to assist and advise through every step of his life. In Batman #83, out this week from DC Comics, we see Alfred reflect on this fact, offering Bruce his last goodbye.

The issue opens as Bruce awakens in the Wayne Manor dining room, seated across the table from the body of Alfred Pennyworth. We see Bruce grieve and lash out, seeming to lose control…a sight that gives Thomas hope his days as Batman may finally be numbered. 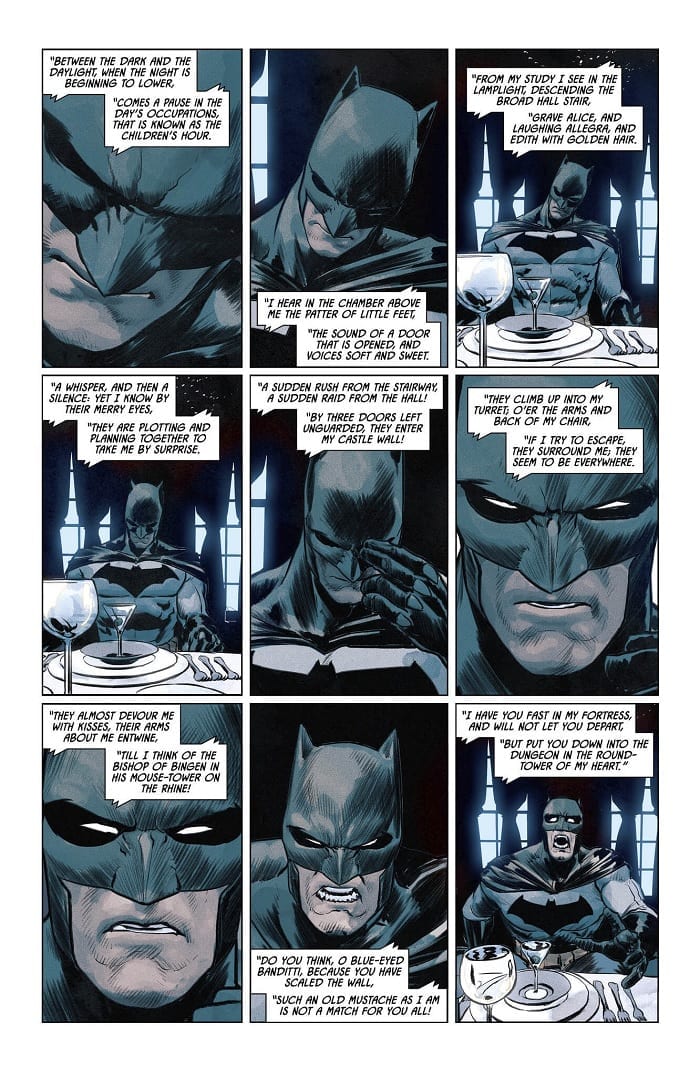 There is sparse dialogue throughout most of Batman #83. Instead, we’re treated to a post-mortem monologue delivered by Alfred, reading like a letter written to Bruce in his last moments. The entire issue is, in effect, Alfred’s farewell to Bruce.

The book opens with a recitation of the poem The Children’s Hour by Henry Wadsworth Longfellow; a meditation on the affection of a parent for his children. Such a move could easily come across as pretentious and annoying. However, writer Tom King makes it work here, with the poem lending thematic weight to the moment.

The butler reflects on his memories of Bruce as a child: cautious, yet vibrant and full of life. Alfred affirms Bruce’s choices, ultimately giving him the validation he needs to face what he must. In some ways, Batman #83 echoes the themes of finding validation and the relationship between parents and children that we saw in King’s work on 2017’s Mister Miracle maxi-series. We see Bruce’s grief at the loss of his beloved surrogate father, a man killed by a twisted and scheming reflection of his real father, Thomas Wayne.

At the beginning of his run on the series, King appeared to pose the question “Who is Batman?” Over time, though, that question seems to shift; not “Who is Batman?” but rather, “Who is Bruce Wayne?” Through Alfred’s recollections, we have a very poignant picture of the man behind the mask.

All things considered, the writing in Batman #83 is methodical, yet touching at the same time. It’s a well-paced slow burn, delivering on the emotional payoff while also setting us up for the climactic finale of King’s story. 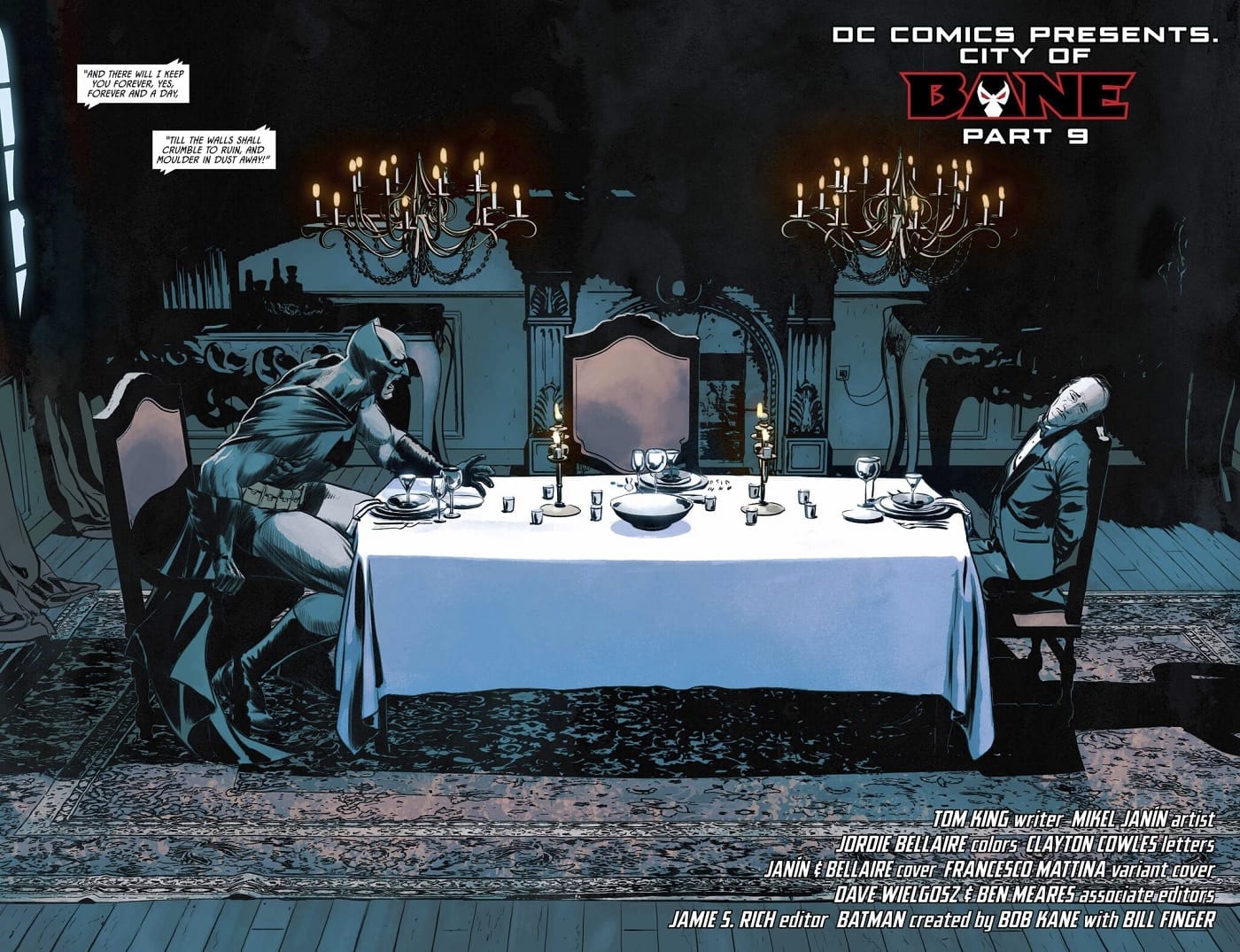 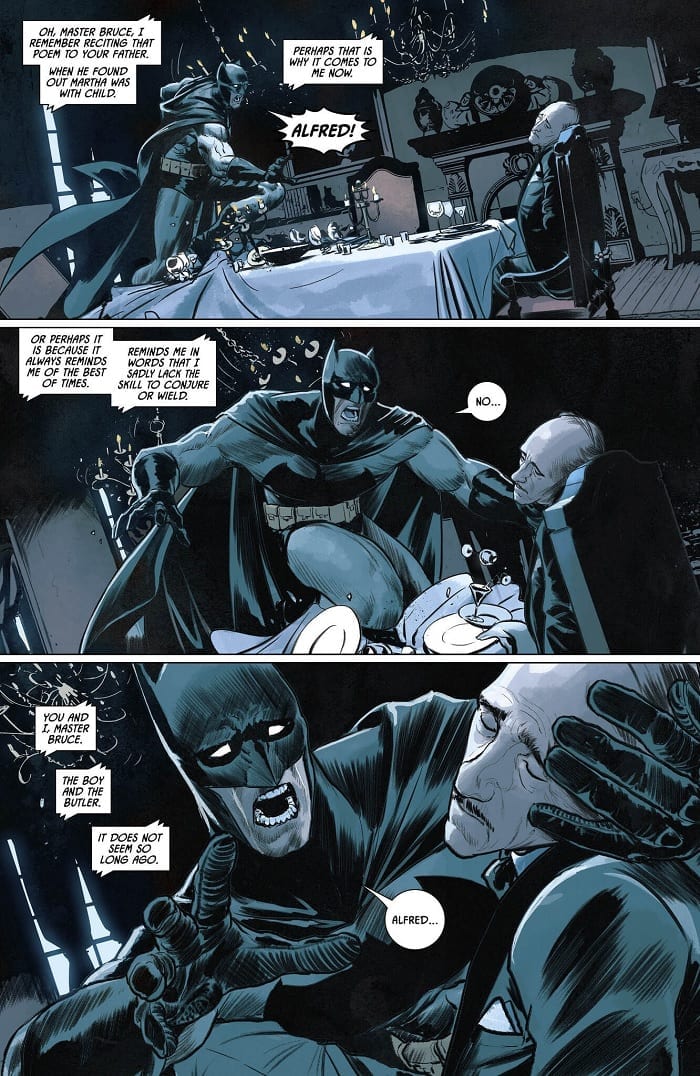 Artist Mikel Janin showcases some fantastic work in Batman #83. Many of our pages are cleanly-divided into neat sequences of evenly-spaced, horizontal blocks of three to six per page, lending the book a sense of crispness and symmetry.

The recurring layout theme allows the artist to play with repetition and variation. He shifts the depth of field to create a sense of dynamism while maintaining cohesion throughout.

Given the sparseness of actual dialogue, there was a lot riding on Janin’s ability to hit the story beats with precision in Batman #83. Fortunately, he  proves to be more than skilled enough to manage the task. With each page, the slow but purposeful action reflects a sense of tenderness as Bruce tends to Alfred’s body. The pacing has the precision of a clock, maximizing the emotional impact of the writing.

Jordie Bellaire provides colors for the issue. Her work here is like a masterclass in how to draw the maximal impact from a monochrome palette. The book is bathed in grayish, deathly blues; however, we see an impressive range of tones employed to highlight subtle contrasts in lighting. Excellent work here. 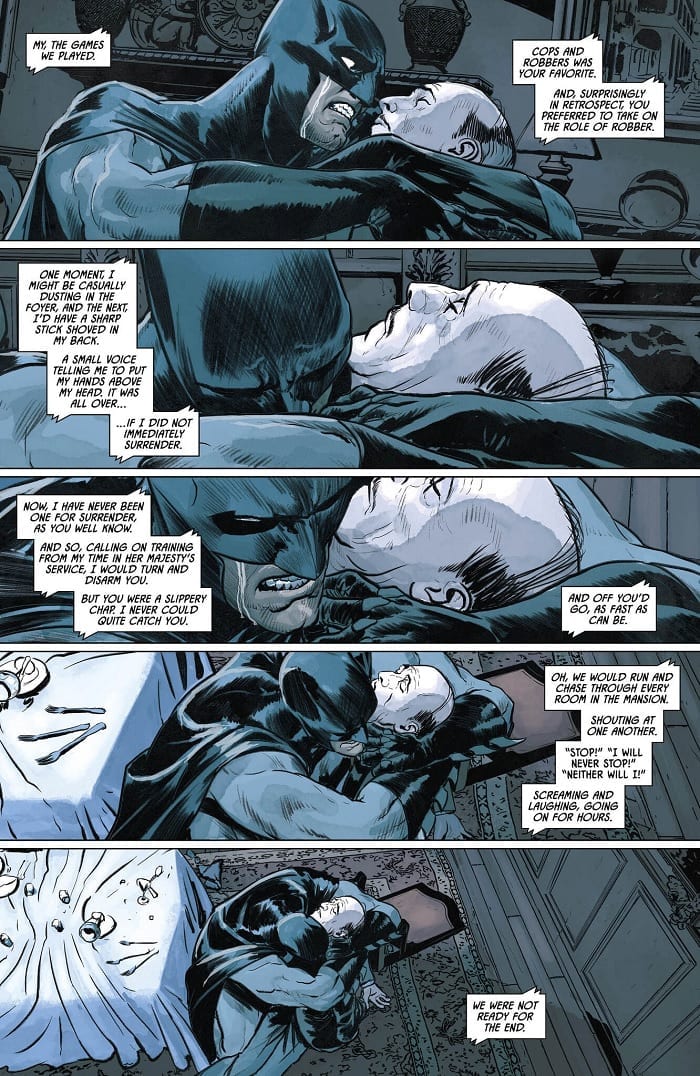 Batman #83 is a highly-effective mood piece. It sets the tone of the story, while also carrying a tremendous emotional payload. Highly recommended for any Bat-fans out there.

Review: Farewell to the Father in BATMAN #83BATMAN #83 is a meditative chapter, offering a touching sendoff for one of the most iconic members of the Bat Family. Well-paced storytelling, all backed by excellent artwork. This one is definitely worth adding to the collection.