Review: The Bat-Family May Never Be the Same After BATMAN #77

Woah. That’s probably the best way to sum-up the implications of Batman #77, out this week from DC Comics. Whether it’s meant in a positive of negative way is yet to be seen.

Defying Bane’s warning, the youngest member of the Bat family has a “that’s so Damian” moment and launches a solo assault on occupied Gotham. Meanwhile, Bruce wakes from his coma, resolved to confront Bane and his father, regardless of the cost. 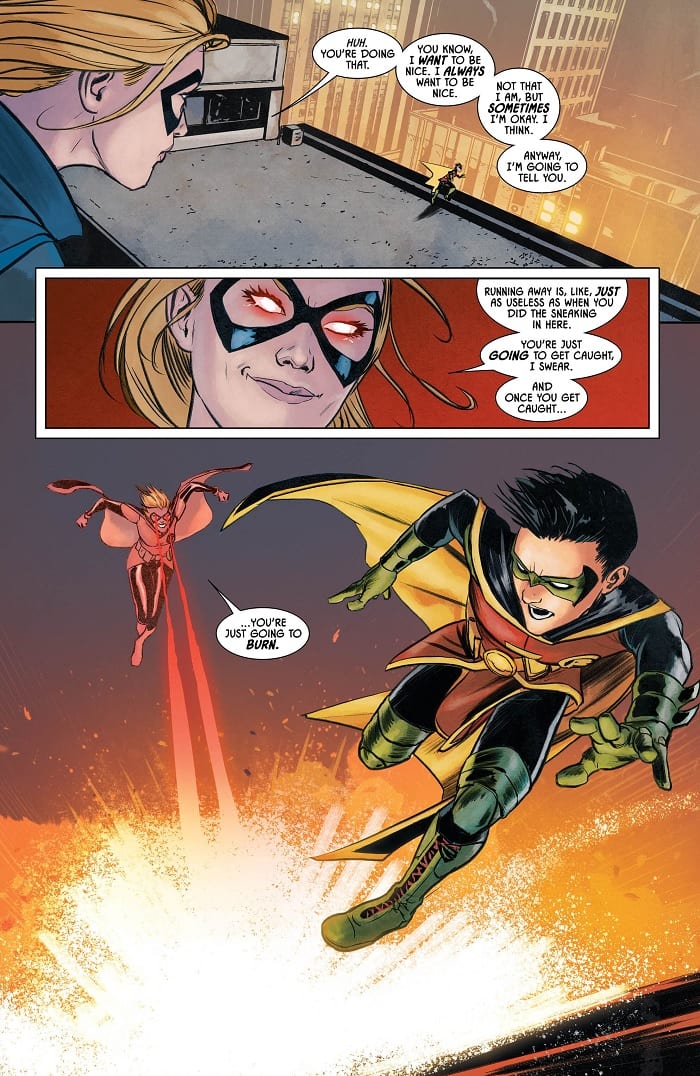 Let’s discuss craft before delving into the details. Tom King’s writing on Batman #77 is tense, tight, and action-packed. Damian is effectively on a speed run through Gotham, attempting to make it to Bane’s base of operations without being bogged down, and one feels the momentum pushing the story forward.

Thomas remarks to Damian that he is “Stubborn, defiant, naïve. You are your father’s son.” And in fairness, they’re all traits Damian exemplifies in great quantity here.

Bruce and Selina’s story gets overshadowed by the rest of Batman #77, but there’s a decent amount to ponder from a thematic angle here as well. For instance, we first see Bruce wake up while Selina is across the room in the kitchen. She’s singing a verse from Habanera which, at first, seems to obviously underscore the theme of her relationship with Bruce. As the book moves on, though, we see it echoes Bruce’s relationship to Gotham. He can never truly leave the city behind, and by the issue’s end, he’s resolved to make a final stand for the city.

The real narrative payoff, of course, comes at the end of Batman #77. When Tom King promised to “change the character for a generation, or maybe more. Maybe forever,” the shocker in this issue could be part of what he had in mind. Without divulging spoilers, suffice to say it’s a substantial blow to the Bat-family, one that will likely polarize fans, as well as change the dynamics of the Bat mythos. Of course in storytelling, one can justify even a radical move like this if ultimately motivated and serves the story. With that in mind, King has some high standards to clear with the climax of his run. 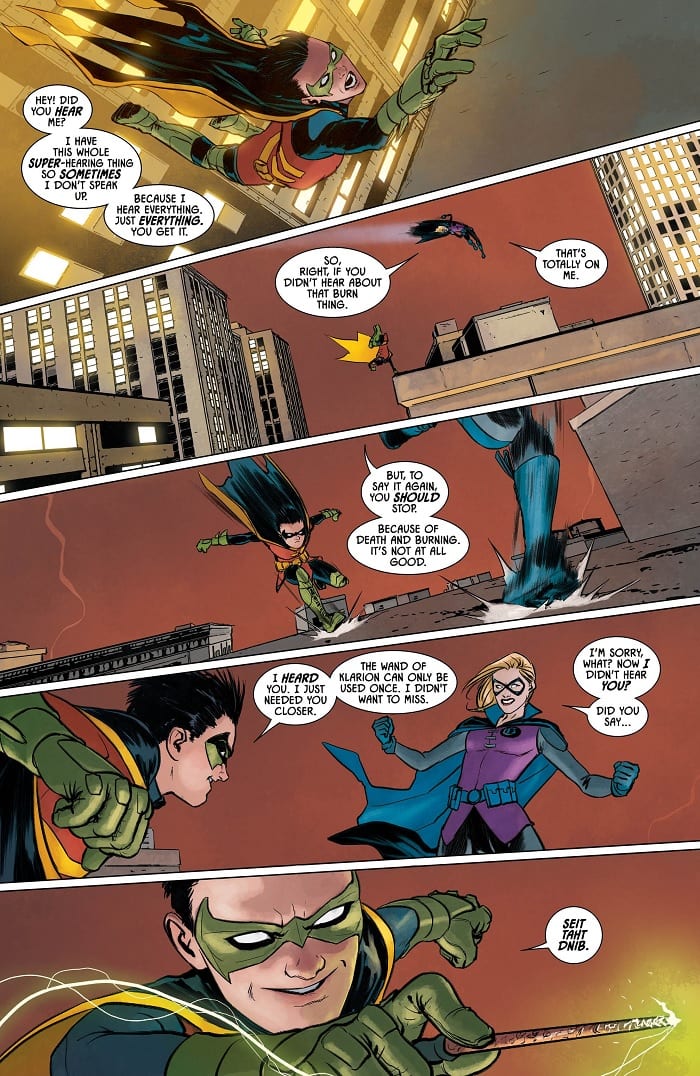 Mikel Janin and Tony S. Daniel provide art for Batman #77. The pair forms a fantastic team, delivering visuals that hit every story beat and capture the action behind the storytelling. While the art styles are distinct, they mesh well, making the work feel cohesive as a whole.

The artists employ repetition in layout, with similar images presented from different perspectives or special focus in the frame. The effect capitalizes on the drama and accentuates the tension in the work. It’s especially noteworthy when contrasted with a more kinetic pages, yet both still work as a singular presentation.

Jordie Bellaire and Tomeu Morey split color duties for Batman #77, and they don’t disappoint in comparison to the quality illustrations. One can appreciate the eye for detail right from the first page; Damian and Gotham Girl meet on a rooftop, backed by the Gotham skyline. The colors on the buildings in the background give it an almost cel-shaded quality.

The colors Bellaire and Morey employ throughout are vibrant, eye-catching, and perfectly match the tone of the work. It’s a quality presentation in this department.

Batman #77 is packed with excellent artwork and compelling storytelling from start to finish. The bombshell it drops will carry narrative weight though, and King needs to make it work in the end. Otherwise, he risks the entire story he’s built over these three-plus years. Decide for yourself after stopping by your local comic shop this Wednesday.

2206
Find out how to get the
Monkeys Fighting Robots magazine!

Review: MAW #1 Embraces The Beast Within