Following Bruce’s encounter with Bane in our last issue, Batman #73 sees the two Batmen roaming the desert, cowboy-style. Thomas’s ultimate goal, his reason for working alongside Bane, is simply to get Bruce out of the super game. How he plans to do it, though, is the matter at hand. The shock reveal in the issue’s last pages seems to pull it together.

Tom King’s writing on Batman is marked by obscured, seemingly surreal sequences that eventually come into focus after the fact. He lets the mood foment as events occur, then applies context to give the narrative shape. Batman #73 is no exception to this approach.

We open with an unconscious Bruce Wayne being driven through the desert on horseback by his father. The horse drags a coffin behind it, and all the while, we have Thomas Wayne ceaselessly delivering the lines to the folk tune Home on the Range. The book seems fairly inscrutable for its first two-thirds, but snaps into focus with information revealed toward the book’s end.

Thomas’s use of the song seems to harken to a desire for escape and simplicity. He wants a kind of return to innocence, the significance of which becomes clear with the reveal in the last three pages.

It’s hard to issue a solid verdict here. The writing is strong and consistent, based on the approach laid out above. That said, Batman #73 will likely be a polarizing issue among longtime fans. The issue resolves some questions, such as key elements of Thomas Wayne’s motivation. But, for every issue resolved, more come about; namely, as it pertains to the book’s ending: “if this were always an option, why is it only coming up now?”

Tom King said what he’s doing with Batman is “going to change the character for a generation, or maybe more. Maybe forever.” If this issue is an indicator of where we’re headed, that’s entirely possible. We’re yet to see whether it will pay off. 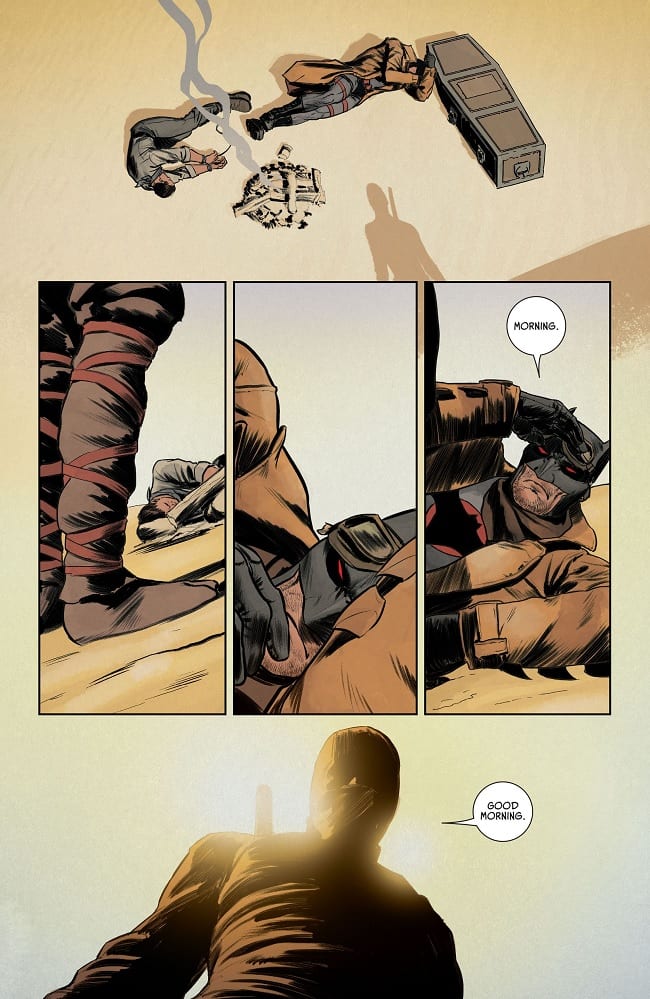 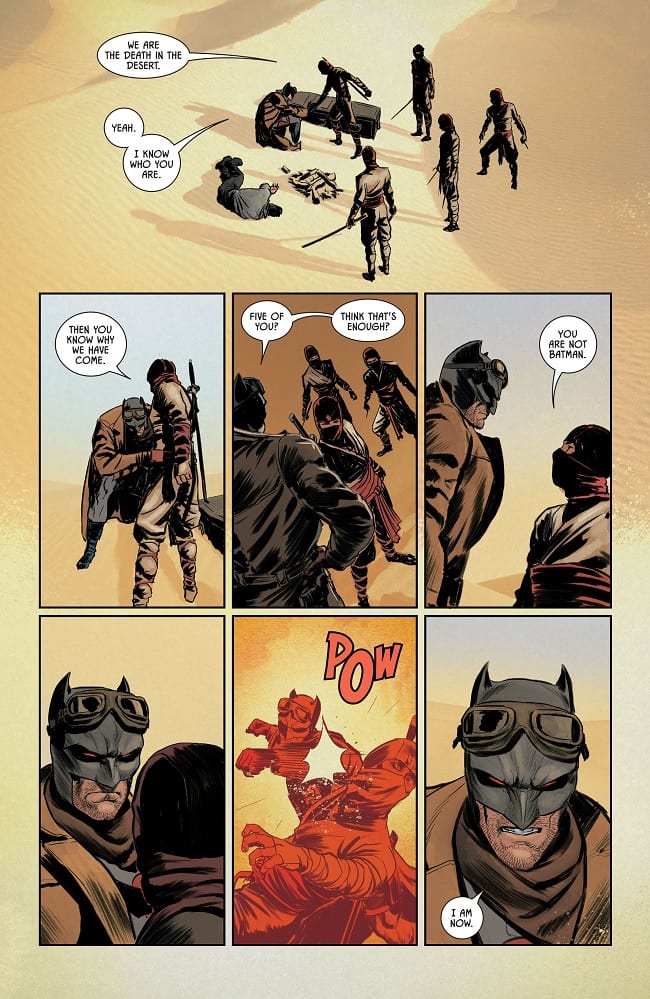 Mikel Janin turns in another strong showing for Batman #73. The book’s first half is full of heavy silences and sparse dialogue, and Janin captures this well. We feel the space as Bruce and Thomas wander the desert. Dramatic shots of Thomas riding on horseback while dragging a coffin behind him pay homage to Django and other spaghetti westerns. It lends itself well to the ambiance and atmosphere of the issue.

The book splits its time between wide, painterly illustrations and tight, regularly-spaced, close-cropped panels. The work feels cohesive throughout, though, and flows nicely.

Jordie Belleaire bathes Janin’s illustrations in earthy tones. Reds, oranges, and browns are the dominant tones through most of Batman #73. Only occasionally does the artist break this scheme, opting for ethereal evening greens and lavender sunrises. It’s not always naturalistic, but rather a skilled impression of the time of day.

Batman #73 is likely to be another polarizing issue among fans. If Thomas is to be believed—and based on King’s statements, he is—these next issues could change Batman forever. I won’t give spoilers, but it threatens to essentially strip away Batman’s raison d’etre. We’ll have to wait and see what the consequences may be.

Review: BATMAN #73 May Forever Change Batman's MotivationTom King said he wanted to change Batman for years, or possibly forever. If that's the case, he may achieve his goal. BATMAN #73 promises to remove that which makes Batman what he is. This decision will probably polarize fans, though I'm at least interested to see what King has in store.