Review: ASCENDER #5 And The Love Of A Father For His Daughter

Things have been ramping up to new levels of excitement in Jeff Lemire and Dustin Nguyen’s ASCENDER series—Mila and her father Andy, most famously known as one of the protagonists in DESCENDER, have spent the past four issues evading the vampiric army of the villainous sorceress Mother. At the same time, Mother herself wastes no time plotting against all forms of technological resistance within the galaxy, and she’s finally found a trace to Mila and Andy’s home on Sampson.

ASCENDER #5, available in comic book stores on Wednesday, August 28, follows the father-daughter duo as they desperately search for a ship to take them off-planet. But will they find it before Mother arrives?

In their exploration of Sampson’s dock area, Andy runs into Telsa, a ship captain friend from his past. Unfortunately, the woman is passed out on her own deck. Andy, lacking all the subtlety of a bullhorn, slaps her until she wakes up. 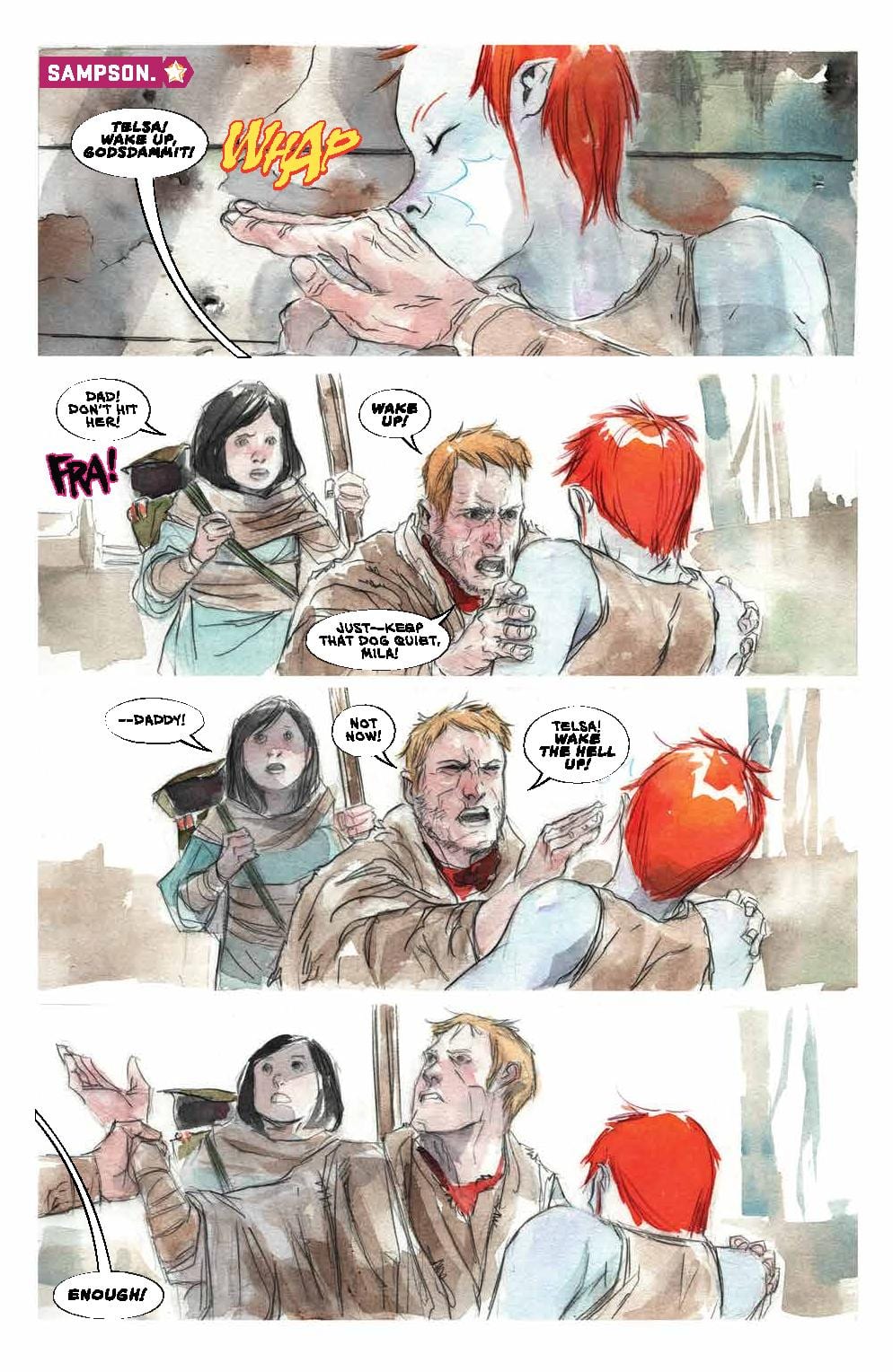 Their shaky relationship from the events of DESCENDER do nothing to discourage Andy’s pleas; he makes clear his determination to get his daughter off the increasingly dangerous Sampson at all costs. Lemire captures the heart of a caring father in Andy’s sincere plea: “Telsa … she’s my little girl. Me and Eff. She’s–she’s all I have left in the universe. I–I can’t lose her.”

While this reunion is taking place, Mother consults a seer and discovers Andy and Mila’s location. But the duo is not what concerns her; it’s their pet robot, Bandit, a perceived threat to her empire. She then proceeds to set her sights on the planet Sampson, just as the father and daughter attempt to make their escape.

Will Telsa agree to help Mila and Andy escape their perilous predicament? And what’s so special about Bandit that Mother would abandon everything else to pursue him? These questions and more will be answered for readers in the thrilling events of ASCENDER #5.

Dustin Nguyen’s penciling and coloring, combined with Steve Wands’ lettering, perfectly capture the action elements present in the narrative. Nguyen crafts crisp waves in the Sampson dock area to set the scene for Mila and Andy’s attempted escape, then abruptly shifts to the explosions created by the vampire troops to effectively wreck this harmonious scene. He also makes these stark shifts in his coloring, depicting a colorful marina on Sampson while removing almost all color from the scenes featuring Mother. These sudden changes only enhance the story’s dichotomic elements, showing the overblown polarities we perceive in our world. 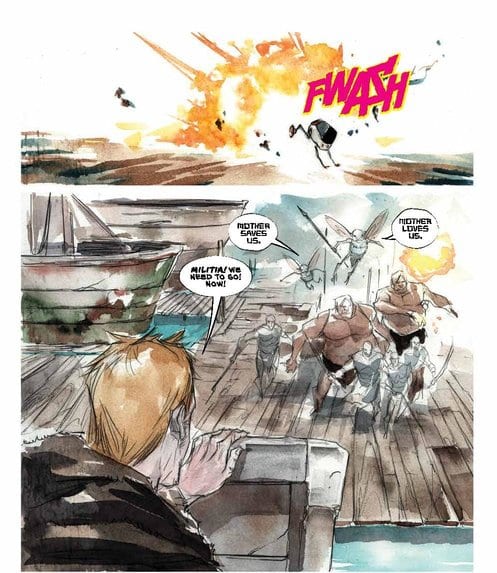 In addition, Wands’ lettering brings the characters to life. He too adds unexpected shifts, specifically in the dialogue, helping readers imagine the character’s reactions to the shocking events as they unfold.

Nguyen’s cover artwork features a hooded figure, most likely Mother, gazing into a void full of asteroids and planets. It reminds readers of her determination to conquer the universe through her sorcery.

ASCENDER #5 is a fitting conclusion to the “The Haunted Galaxy” arc in this series. With such tumultuous events leaving our protagonists in dire straits, it’s anyone’s guess at how they will avoid Mother’s grasp.

Do you think Mother will clash with Andy and Mila soon? Let us know in the comments below!

Review: ASCENDER #5 And The Love Of A Father For His DaughterASCENDER #5 is a fitting conclusion to the "The Haunted Galaxy" arc in this series. With such tumultuous events leaving our protagonists in dire straits, it's anyone's guess at how they will avoid Mother's grasp.