Andy and his daughter Mila have been on the run from Mother’s forces for some time now, all because of their robot dog Bandit. In this world, technology has been outlawed, and an army of sorcerers will stop at nothing to eradicate any form of technological resistance. But hope for the trio lies in the docks on Sampson and the ships they harbor. Will they make it before Mother’s monstrous vessels destroy them?

ASCENDER #4 is largely a connecting issue that remains in motion, refusing to halt the narrative in just one place. Jeff Lemire and Dustin Nguyen work in a satisfying dialogue to show reader’s what the character’s are feeling while avoiding forcing it into the issue’s non-stop action. Mila and Andy, having momentarily escaped the vampiric beings who raided their house, rush across the landscape as even more monstrous beings approach them. 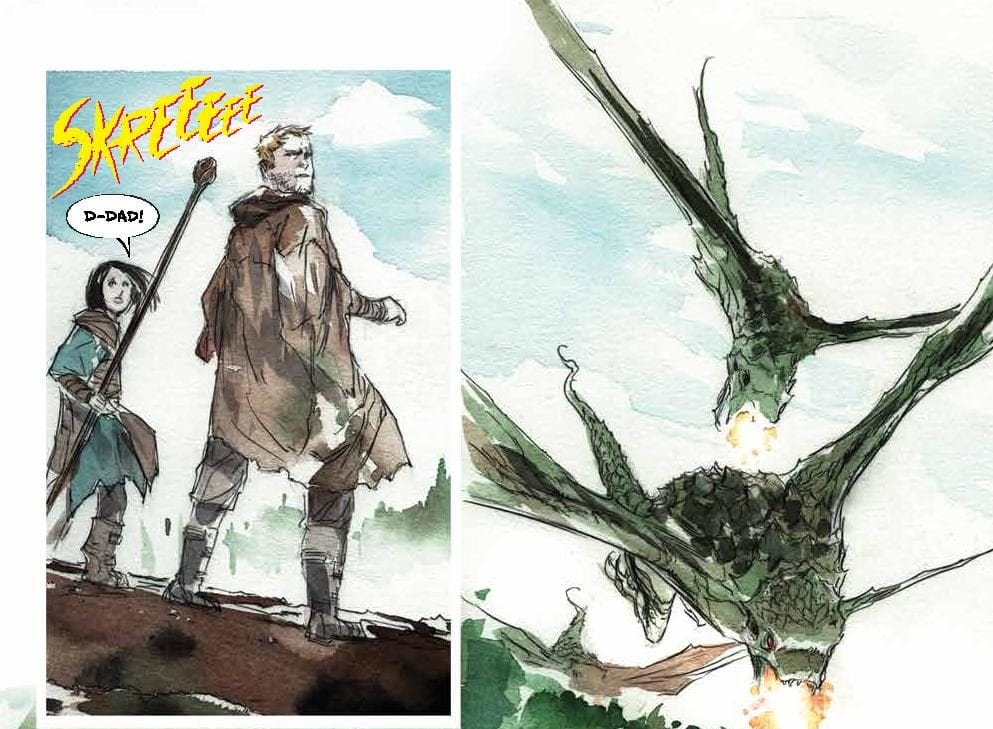 Just when readers become fully engrossed by the non-stop action on Sampson, the authors immediately shift the narrative to Mother. This abrupt change keeps us on our toes and reminds us who the real threat is. Indeed, it is here we see her viciously interrogate a UGC commander who’s leading the resistance.

All of this calamity and violence is leading to an all-out war between users of technology and magic wielders, reflecting the conflict in the previous DESCENDER series. Can Andy, Mila, and Bandit escape the coming violence? Readers will be overcome with anticipation as they await the outcome.

Nguyen’s artwork is arguably the main driving force behind ASCENDER #4. His penciling, inking, and coloring depict incredible scenes of Mila, Andy, and Bandit’s escape from Mother’s army on Sampson. Readers will hold their breath after seeing the trio leap off cliffs, swim in colorful lakes, and ride the fantastical flying sea turtles as the family makes their way to the docks.

Steve Wands’ lettering and design work beautifully frames the story’s artwork. While the dialogue is less prominent than in previous issues, he makes the most of it by filling empty spaces with onomatopoeia words, such as when the dragon-like beings send exploding fireballs down or the characters plunge into Sampson’s watery depths. 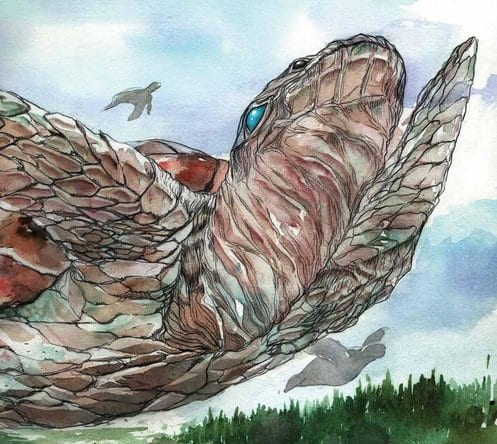 Nguyen’s cover illustration places all of the focus on Mother, as well as all of the “Mothers” who have come before her. We see their spirits floating around the overlord to reflect their continual influence upon her psyche.

ASCENDER #4 pushes the narrative forward at lighting speed, but successfully brings readers along for the ride. Hopefully we’ll receive more explanations regarding the docks and Mother’s interrogation of the UGC.

Did you like the illustrations of Mila and Andy’s escape? Let us know in the comments below!

Review: Mila, Andy, And Bandit Flee From Mother's Forces In ASCENDER #4A fast-paced issue detailing Mila and Andy's escape from their home. We also see more of the viciousness Mother is capable of.